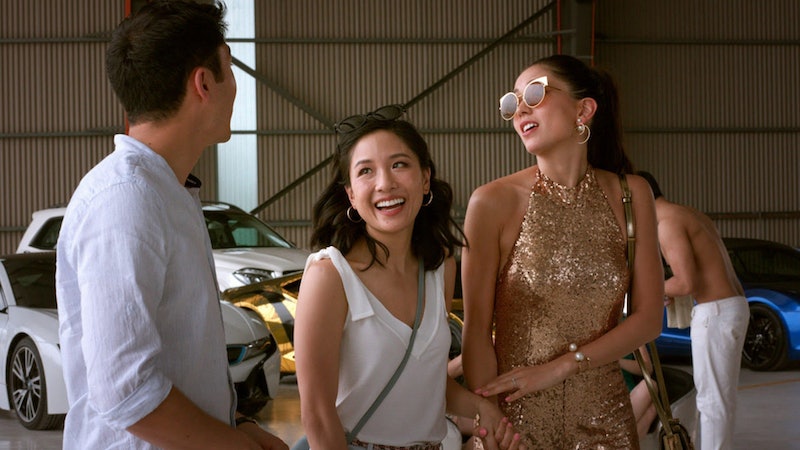 In the words of the legendary Eleanor Young, other streaming services will officially "never be enough" now that the romantic comedy of the summer is heading online. Crazy Rich Asians will be available to stream on HBO Now in April 2019, so that you can relive the glitz, glamour and romance of Rachel (Constance Wu) and Nick (Henry Golding)'s love story over and over again.

The film, which broke records with its box office release over the summer, is one of several beloved properties coming to the streaming service this spring, joining Mean Girls, the Oscar-winning BlackKklansman, and, of course, the final season of Game of Thrones. While fans never need an excuse to revisit any of these titles whenever they feel like it, having Crazy Rich Asians available to stream is particularly exciting, as audiences will have to wait quite a while for the film's sequel to hit theaters. While the follow-up film, based on Kevin Kwan's novel, China Rich Girlfriend, was greenlit back in August, according to Collider, filming likely won't begin until 2020, after director Jon M. Chu has finished the big screen adaptation of In The Heights. To make a long story short: the Crazy Rich Asians sequel isn't going to be released anytime soon, which is why fans are going to need to rewatch CRA as much as they can to get their fix.

During your rewatches, if you happen to find yourself focusing even more than usual on the many, gloriously sexy shots of Golding and his male co-stars shedding their shirts onscreen, you don't have to feel guilty. In a recent interview with Bustle, Crazy Rich Asians' screenwriter, Adele Lim, revealed that the film's shirtlessness is part of its quest to fight against stereotypes about Asian men onscreen.

"A lot of Asian women [in pop culture] are depicted as sex workers, or victims in human trafficking... and the men are strictly relegated to these tech-y, asexual roles," Lim told Bustle over the phone in February. "The opening shot of Pierre Png, who plays Astrid's husband, in the shower — these are foreign images for us, that we want the men to be viewed in full ways. And we want people to get used to that idea."

As a result, Lim revealed that she and Chu wanted to include as many shirtless moments and love scenes in Crazy Rich Asians as they could, saying, "It was very intentional because we don't see Asian couples, and we don't see Asian men that way — ever. Or very, very rarely." In other words: you're meant to swoon over the film's most romantic (and sultry) moments, and there's no need to feel guilty about it.

Though the streaming arrival of Crazy Rich Asians is incredibly exciting, HBO Now subscribers still have some heartbreak headed their way in April. Among the films leaving the service at the beginning of the month are The Greatest Showman, Pitch Perfect 3, and Wonder Woman, which will leave at the end of the month. So, if you're hoping to rewatch the superhero epic before 1984 is released, make sure to plan accordingly.

Here's the full list of everything that's leaving and coming to HBO Now in April so that you can plan your movie nights accordingly.