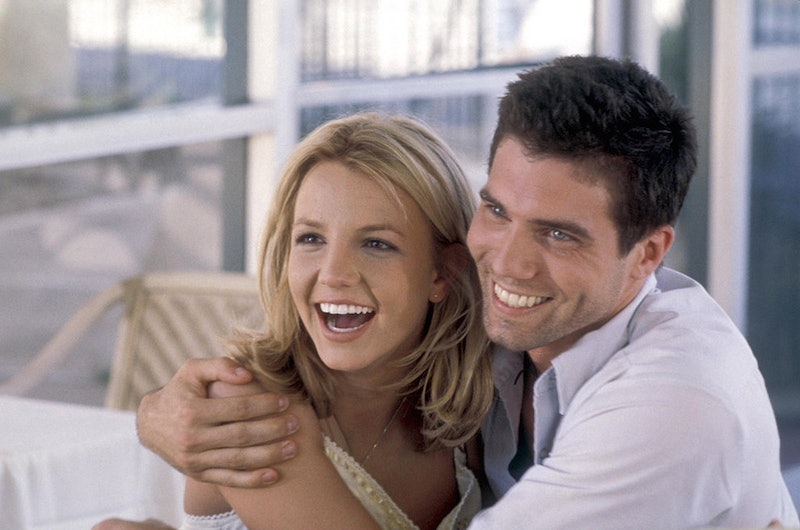 Brace yourself, because you're about to feel really old. The classic movie Crossroads, starring the one and only Britney Spears, came out on Feb. 15, 2002, making it 15 years old. I have no idea where that time went, as it feels like only last week I purchased my DVD copy. The reviews of the movie weren't great when it came out, but fans of the "Toxic" singer loved her leading role on the big screen. With a stellar female cast and director, and a script by Shonda Rhimes (yes, really!), Crossroads was a feminist film in waiting. But the script should've focused on female friendship, and forgotten the love story altogether, and here's why.

When Mimi, Lucy, and Kit embark on their roadtrip, their friendship isn't what it was when they were kids. The trio has drifted apart, and although the "wish box" has reignited some of their #friendshipgoals, there's still a long way to go. Over the course of the movie, the three women become each other's family, working through some truly horrific events together, and coming out the other side stronger. Which is why the appearance of Ben in Crossroads, Lucy's prospective love interest and sometime musician, detracts from the feminist message of the movie.

While everyone's entitled to a little romance if they want it, Ben isn't a wholly convincing love interest for Britney Spears. Sure, Ben is a musician who enjoys impromptu acoustic guitar sessions, and has incredibly clichéd back tattoos — It's easy to see his appeal, am I right? But is his character really important in the grand scheme of things, or would the movie have been better had he not turned up?

Lucy (Spears) is a self-proclaimed virgin at the start of Crossroads, turning down an overly keen Justin Long after graduation because she wants to feel a spark. Lucy isn't in a rush to have sex, and won't bow to societal pressure. However, following the briefest flirtation with Ben, Lucy is suddenly ready to bang, which would be fine if Ben seemed like an actual prospect, or had an ounce of personality. Instead, he's an unnecessary distraction from Lucy's relationships with her peers.

In a cynical way, it feels as though the character of Lucy had to lose her virginity, so that Spears's rendition of "I'm Not a Girl, Not Yet a Woman" at the end of the movie would be legitimized. But what if the love interest was completely absent? Wouldn't Lucy's journey have been every bit as meaningful, alongside some of her oldest friends? Clearly, none of these women need men to achieve their goals, and the bond between them is far stronger than any romance could ever be.

Ultimately, Crossroads is a movie about female empowerment, standing up to criticism, and becoming the person you want to be. Mimi, Lucy, and Kit are undoubtedly the most important people in the movie, and Ben is very much a supporting character. Whether he needs to be there or not, the film's focus is firmly on female friendship. Still, it's difficult not to feel as though any sequel to Crossroads wouldn't feature Ben, because Lucy would definitely have moved on by now.