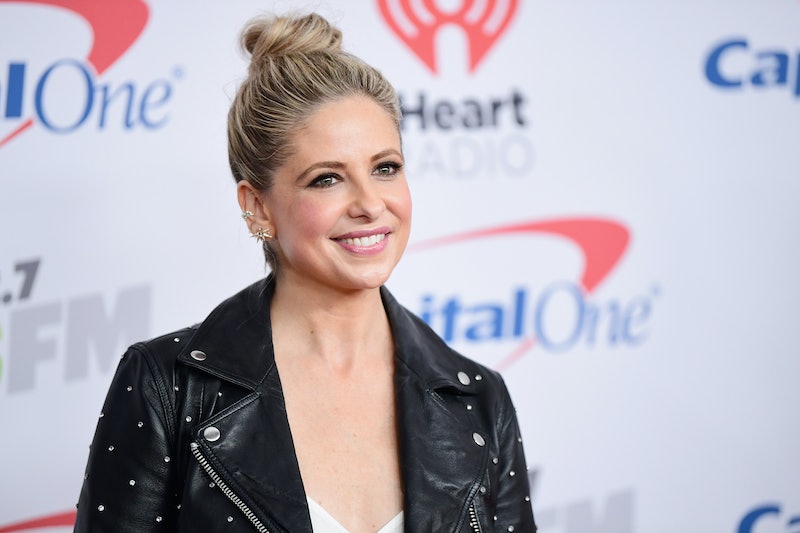 Something magical happened at the Saturday, Dec. 16 performance of Cruel Intentions: The Musical — Kathryn Merteuil came face to face with herself. As reported by Entertainment Weekly, Sarah Michelle Gellar attended the Cruel Intentions musical and supported the new Kathryn, Lauren Zakrin, as well as the rest of the cast. The Buffy the Vampire Slayer star seems to have had a wonderful night, and she even posed for a picture with the new generation versions of the characters made famous in the 1999 film.

After the show, Gellar shared her picture with the next generation of Cruel Intentions stars on Instagram, and her caption for the photo couldn't have been more perfect. She wrote,

"Sometimes you just need to hang out with the younger, better looking and more talented versions of yourself!! There is nothing bittersweet about the incredible NY production of @cruelmusical You can even get an iced tea (from Long Island) while you watch the show."

The Cruel Intentions: The Musical production will be at (le) Poisson Rouge in New York City through Feb. 19. Reviews of the musical makes it clear the show takes its job of adapting the 1999 film for the stage seriously. As an added bonus, it includes numerous renditions of hit '90s song, including a performance of Goo Goo Dolls' "Iris" by the show's Sebastian. And while Gellar isn't an official member of the cast, she does provide a special contribution to the show's vibe — she taped a Kathryn-esque voice-over intro telling audience members to turn off their phones. "It's not that difficult, morons," Gellar says at the top of every performance. "Take out that second-rate phone and hit the silent button."

While Gellar insists there's nothing bittersweet about hanging out with the cast that's keeping Cruel Intentions' legacy alive, fans of the movie might still be a tiny bit bitter over NBC passing on the Gellar-led TV sequel to the film. A pilot set 15 years after the events of the film was in contention for a spot on NBC's lineup in 2016, but the project didn't move forward. The tantalizing prospect of Gellar bringing an adult Kathryn to the small screen in all of her conniving glory turned out to be too good to be true.

Thanks to Cruel Intentions: The Musical, the upper-crust mayhem created by Kathryn and her step-brother Sebastian is still going strong. And knowing Gellar thoroughly enjoys the young cast's take on the film makes the production even sweeter. In fact, she even brought along a famous friend to watch the show with her — Lee Pace.

Pace didn't appear in Cruel Intentions, but the Pushing Daisies actor has shared the screen with Gellar in the past. The two starred in the twisty psychological drama Possession. Gellar shared a photo of herself and Pace enjoying their evening, and she captioned it,

"Oh yeah, and check out my partner in crime last night, @leeepfrog. It's always trouble when we go out (but of the best kind)."

Anyone else want to see these two reunite onscreen now?

If Kathryn remains your favorite anti-hero then seeing Gellar alongside Zakrin is an undeniably cool moment. The '90s queen of the bad girls is still going strong — and she's added singing to her bag tricks. It's hard not to think about what might have been if only NBC had moved forward with their plans for a Cruel Intentions series, but Cruel Intentions: The Musical is the next best thing.

With any luck, the off-Broadway show's soundtrack will be available soon, so that fans everywhere can indulge in the musical too.

Now that the musical has brought two versions of Kathryn together its cool points are even higher. As an added bonus, Gellar and Zakrin's support and admiration for one another proves that Kathryn Merteuil can have serious respect for someone (especially when that person happens to be another version of herself).

More like this
Lindsay Lohan Just Recalled A Hilarious 'Parent Trap' Story
By Sam Ramsden
See 'Twilight' Stars Together Again For A Sweet Cullen "Family Reunion"
By Stephanie Topacio Long
The First Trailer For 'That '90s Show' Includes So Many Nods To The Original Series
By Jack Irvin, Alyssa Lapid and Grace Wehniainen
These ‘Love Actually’ Plotlines Are “Out Of Date,” According To Director Richard Curtis
By Grace Wehniainen
Get Even More From Bustle — Sign Up For The Newsletter