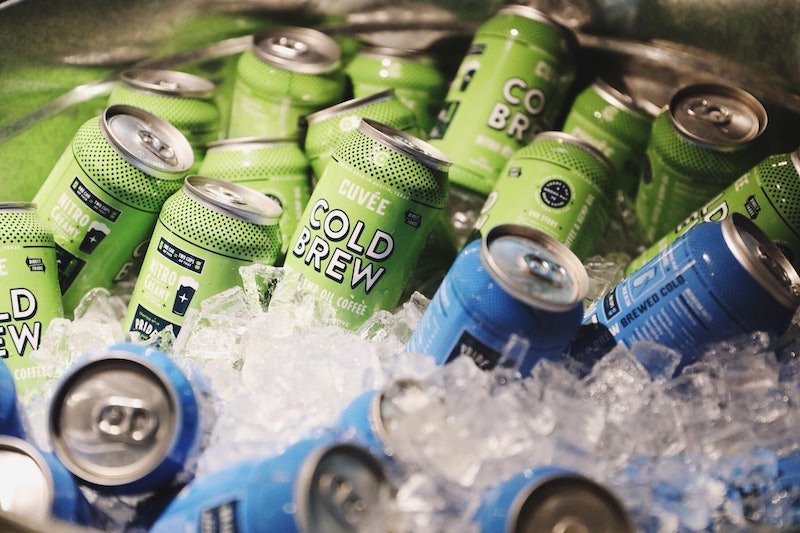 We’ve been hearing about CBD-infused coffee left, right, and center lately, but specialty coffee roaster Cuvée Coffee has something new to add to the conversation: Cuvée’s Nitro Hemp Oil Cold Brew Coffee is available in cans — meaning you can now bring along CBD-infused iced coffee to your next summer picnic in the easiest, most travel-friendly way possible. And it’s not just any iced coffee, either; it’s nitro cold brew, the form of super concentrated, super flavorful iced coffee that has the rich, creamy mouthfeel of a good pint of Guinness. Heck, and yes.

This is not, as they say, Cuvée’s first rodeo. The company has existed for a whopping 20 years, having been founded in 1998 as a part-time venture by Mike McKim; based in Texas, Cuvée now operates a coffee bar in Austin with its roasting headquarters located in Spicewood. It’s long been known as one of Texas’ leading specialty coffee roasters, according to Daily Coffee News, with its Black & Blue Nitro Cold Brew being the company’s signature offering.

The origins of nitro cold brew are a little murky; several coffee aficionados and purveyors in vastly different areas of the country all seem to have struck upon the idea independently at more or less the same time. In Astoria, New York, the Queens Kickshaw, which has since closed, began pumping cold brew through its draft system around 2011; Nate Ambrust of Stumptown Coffee Roasters in Portland, Ore. began toying around with nitrogen as a way to get bubbles into iced coffee circa 2013; and Cuvée, which was originally located in Dallas, began seriously working on creating nitro cold brew in 2011 before serving up its first pint of the stuff in 2012. Cuvée started canning its Black & Blue nitro cold brew in 2014 — the first company to do so, according to the Texas Standard.

And now, riding high on the CBD trend, Cuvée has released a new version of its classic cold brew spiked with hemp oil. The company’s Nitro Hemp Oil Cold Brew, which debuted on April 20, 2018 (of course), contains 10mg of water-soluble CBD hemp oil per can, with each can holding about two cups of coffee; the end result combines the calming effects of CBD with the little push of alertness caffeine imparts. The oil used is tasteless, by the way, so you won’t end up with a weirdly, uh, medicinal-tasting drink — it’ll just taste like nitro cold brew. Matthew Champion of the website The Austinot described Cuvée’s Black & Blue in 2014 as “unbelievably creamy and smooth,” with a “rich and savory” taste; the Nitro Hemp Oil Cold Brew likely tastes similar.

By now, you’re probably familiar with the health benefits to which CBD lays claim — but just in case you need a refresher, here’s the short version: Unlike THC, it’s not psychoactive, so it won’t get you high (although some CBD products may have miniscule amounts of THC in them, as well); however, according to the World Health Organization, CBD has neuroprotective, antiepileptic, hypoxia-ischemia, anxiolytic, antipsychotic, analgesic, anti-inflammatory, anti-asthmatic, and antitumor properties. It can alleviate both pain and anxiety; what’s more, research dating back to the 1970s has demonstrated CBD to be a potentially effective treatment for epilepsy.

Most of these claims haven’t been evaluated by the Food and Drug Administration (FDA) — indeed, most companies that make CBD-infused products include on their websites a statement to the effect of, “The claims on this website have not been evaluated by the FDA; CBD has not approved the use of CBD for the prevention or cure of disease; we do not make any claims that it does; and this product is not meant as a treatment for anything” — but the FDA did just approve the marijuana-derived, CBD-powered drug Epidiolex as a treatment for seizures on June 25.

Although it’s often said that CBD is legal in all 50 states, the issue is a bit more complicated than that; as Jenni Avins noted at Quartz earlier this month, it really “depends on where you are, where your CBD came from, and, frankly, who you ask.” Seattle-based attorney Daniel Shortt, who deals largely with cannabis law, told Avins, “So much of this is operating in the absence of regulation, and states take widely different approaches. You have to know your local law.”

The source of the CBD in question definitely matters here. According to the website Leaf Science, CBD can come from both the marijuana plant and the hemp plant — which are two different plants with very different properties. Both contain CBD, but marijuana also contains high levels of THC, while hemp contains virtually none. In fact, because recreational marijuana isn’t legal in Texas right now, the CBD used in Cuvée’s cold brew comes from the hemp plant, not the marijuana plant — and, as the company’s blog notes, they’re careful to use the term “Hemp Oil” in order to make it “very clear that our product is produced from hemp and does not contain THC in any discernible amount.”

Anecdotally, though, some folks really swear by CBD — so if you’ve been looking for a way to try it out that will also give you a bit of a caffeinated kick, you might give Cuvée Coffee’s Nitro Hemp Oil Cold Brew a shot. It’s available in select natural and conventional stores for around $4 a pop; head to Cuvée’s product locator to find out where you can get it near you. I’ll drink to that!