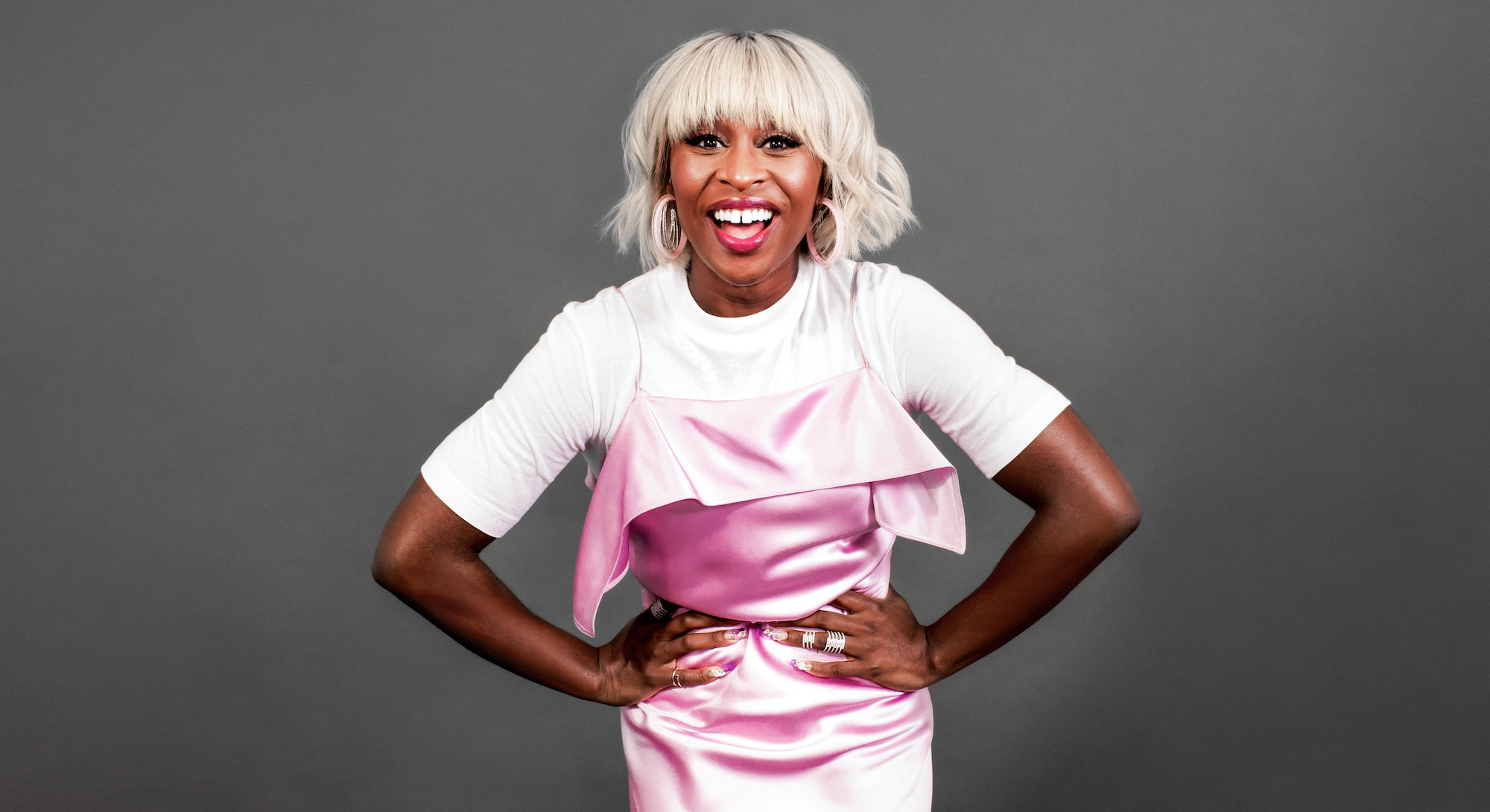 Here is what we are told about strong women: They are only strong because something has caused them to be. And that something is, almost always, a man. As we have seen time and time again, in movies and on TV and in real life, men frequently bring women down and make them small. Women get hurt and in response, they bulk up. They punch bags. They become invincible, so no one can ever hurt them again. Except, here's the thing: While those women exist, they are not the only kind of strong women out there. There are those who have both emotional fortitude and physical prowess solely because they want to, not because of necessary circumstance. And their leader, right now, is Cynthia Erivo.

Yes, Erivo has been hurt before — "how many people can we say have no trauma in their lives? Many of us do," the 31-year-old says, as she sits across from me on the couch in September — but trauma is not the reason for her strength. There is no reason other than her own motivation, and when we speak, she is clearly frustrated with the idea that so many people believe there has to be one. For some years now, people have been asking her the source of her strength, assuming that there had to have been a catalyst for her intense regimen, and it baffles her every time.

"I’ve had that question so often — 'oh, so when did you start working out, why did you start doing this, and what’s it for?' And you’re like, 'Well, because I want to stay healthy, I don’t know,'" Erivo says. "There is a really deep, sentimental part of me that’s like, working out gives me the space to be in my own space, but again, it’s not the traditional answer. Like, 'Oh, this happened to me and I wanted to get strong and I wanted to defend myself.' That’s just not what it is."

Since the beginning of her career — a few high-profile UK theater roles, followed by the 2015 Broadway run of The Color Purple that won her three-fourths of an EGOT — Erivo has spoken extensively about her workout routine and near-constant runner's high, but also the kind of powerful roles she tends to play. The Color Purple's Celie is a character Erivo once called the "ultimate survivor" — a woman who is beaten, raped, and sold into marriage. And in Bad Times at the El Royale, out Oct. 12, the actor's Darlene is implied to have experienced enough abuse at the hands of men that when, in a pivotal scene, she fights back, viewers know we're only scratching the surface of her power. Both of the aforementioned women are strong because the men in their lives have made it so they have to be. "They keep going," Erivo says, "even when it’s as hard as it can possibly be."

These characters, like so many others who've discovered their power due in part to the horrific actions of men (Sansa Stark, Annalise Keating, Jessica Jones, Lisbeth Salander, Black Widow — the list goes on) represent just one facet of womanhood, yet their frequency on-screen can make it seem like they're representative of the entire experience. But Erivo is tired of this. "We need to see things that are not connected to men in film," she says firmly. "Women have their own stories."

The history of strong women on-screen is fraught, to say the least; for years, the typical portrayal was a female character with few defining characteristics but her physical prowess, on-screen seemingly just to fill a quota. How can you call a series or film out for sexism, after all, if it shows a woman kicking ass? Yet these characters' otherwise one-dimensional nature earned enough criticism that a backlash to the "strong female lead" formed, and those portrayals slowly lessened. The other kind of woman frequently depicted — the one whose strength comes directly from the male-caused trauma she's experienced — is often only marginally more complex. And it's no coincidence that behind both of these depictions has been an industry full of male studio executives.

'Why does it always have to be because of a man?'

"For time immemorial, it’s been a patriarchal world. It’s led by men and their stories get told first and they get heard loudest," says Erivo. "The people who are the producers are usually men, and these people get to choose what goes on screens and what we get to see, and they want to see that usually. It’s what they can adhere to."

Erivo is, naturally, a supporter of other women; she listens to Janelle Monáe during her photoshoot, posts heartfelt Instagram tributes to her little sister, and has starred in women-filled ensembles in nearly every project she's done. For Widows, out Nov. 16, she worked with director Steve McQueen to create a character, Belle, whose power does not stem from past pain. "[Steve] had a conversation with his daughter, and his daughter said the same thing — 'Why does it always have to be because of a man?'" Erivo explains.

As a result, the filmmaker chose to keep Belle's storyline focused on her own goals and desires, not any male figure in her life. He and Erivo decided that the script wouldn't "talk about the guy that she was with, or might not have been, or whatever happened to him," the actor says.

Of course, we see women being constantly reminded of and affected by events from their past, most recently in the hearing of Brett Kavanaugh and the testimony of Christine Blasey Ford. "She’s just strong — she’s just incredibly strong," Erivo says of Ford, when I bring up the professor's visceral account of alleged assault, delivered to a room full of men and an audience of an entire nation. "She went through something that was terrible where she didn’t want to tell anybody — like, that was not her doing. She just happens to be really strong as is. The fact that she’s standing there means that she’s a super strong woman. That's just it."

Yet as shown with Ford, and with on-screen characters like Erivo's Darlene and Celie, there is a balance that can be achieved between women as flawless, omnipotent heroes and pain-scarred warriors out for revenge. At the time we speak, Erivo is beginning work on the upcoming Harriet Tubman biopic Harriet, in which she'll play the famed abolitionist. Her biggest challenge, she tells me, is not portraying her as a "monolith," but as a real person who suffered severe trauma and yet was not defined by it.

Those are things that I was born with and worked really hard to do. And so if I didn’t have those things, I know I wouldn’t be ready, but I am.

"For her story, it’s really important to see her as a human being who was hurt, whose husband left her, who had a brick thrown at her forehead, who had seizures, who was in love, who was a woman in her being, who couldn’t have children — like, all of those things," Erivo says, the intensity in her voice rising as she speaks. Harriet, she explains, will show how Tubman brilliantly used skills like swimming, running, and wit to become a spy and Conductor of the Underground Railroad.

"Because then," Erivo continues, "you see her as a full human being... and not just someone who was plucked from some planet somewhere."

When Erivo was first cast as Tubman in 2017, the reaction was mixed. Few doubted the actor's talent, but the idea of a British actor playing such a prominent African-American figure — and thus "taking" the role from an American actor — did not sit well with some. In September of this year, Erivo responded to the criticism, writing on Instagram that she "fought" for the part like anyone else would, and is excited to take it on. "I hope that I do everyone, even those who are in doubt or are upset, proud," she wrote. Speaking out further now, Erivo admits that she was "surprised" by the backlash, but understands it, too.

"I get that there is upset for me playing this role, and I understand where it comes from. It comes from so many African-American women feeling that they don’t get seen. There just isn’t enough when it comes to film and TV and entertainment. There isn’t enough — nowhere near enough — for us, as women of color, to see ourselves," she says. "And so I understand why this particular role, which is held to high esteem in this community, feels like it’s losing one of their own."

"But at the same time," she continues, "I would speak to it as a woman of color. The only way we can come to agreement or to a common place is to understand that we all have suffered from feeling invisible; we all have suffered from otherness. And the only way to combat that is not to separate each other from each other, but to come together and have that discussion and understand what that is."

Like usually happens, the backlash will fade, if not immediately, by the time audiences see Erivo on-screen; after all, she explains, she is so much like Tubman already, in her appearance and demeanor, that it's as if she's been readying for the role her "entire life." There's also the singing; as Erivo tells me, Tubman sang to slaves to let them know when it was time to come and go. Music will factor heavily into Harriet, along with Tubman's physical strength despite her small stature (like Erivo, Tubman was barely over 5'0"). "Those are aspects that I’m made of," the actor says bluntly. "Those are things that I was born with and worked really hard to do. And so if I didn’t have those things, I know I wouldn’t be ready, but I am."

Erivo projects the kind of confidence that makes you truly think that if she looked every skeptical person in the eye and explained her reasoning, they'd be so convinced that she's right for the role, they'd be practically campaigning for her Oscar. "Cynthia is not just one of the most, but the most confident woman I know," says Danielle Brooks, Erivo's co-star in The Color Purple, adding, "Through the way she lives her life, she reminds me that anything I want in life, I can have it. Period. She inspires me to not be afraid to dream bigger than I ever thought I could."

It's this self-assuredness that has helped Erivo convince directors she can play parts as varied as Celie and Darlene, that has aided her on stage as she's belted out song after song, that has let her shrug off the frustrating questions she inevitably gets after each flex of a muscle or pull-up at the gym. And while she hasn't been single for some time — she's in a relationship that she keeps private, save for the occasional Instagram — it's clear she isn't dependent on anyone but herself.

"I’ve lived a very independent life and most of the things I do for myself are for myself, by myself, and I don’t really connect it to any man," she tells me. "And I am with someone, but we’re very independent people, and I think that’s why we work. And when I was with my previous [partner], we didn’t work that way."

Erivo is somehow both the therapist and the enlightened client at once, the friend whose shoulder you lean on after a bad break-up and the one who snaps you back into reality by telling you he was never good enough. She is herself, through and through, a woman who has been hurt, yes, but isn't defined by it. When she tells me this — "I do think sometimes people don’t really understand what and why and who I am, or where I’ve come from, and how I’m the way I am" — she says it without an ounce of self-pity. She knows who she is, and that's enough.