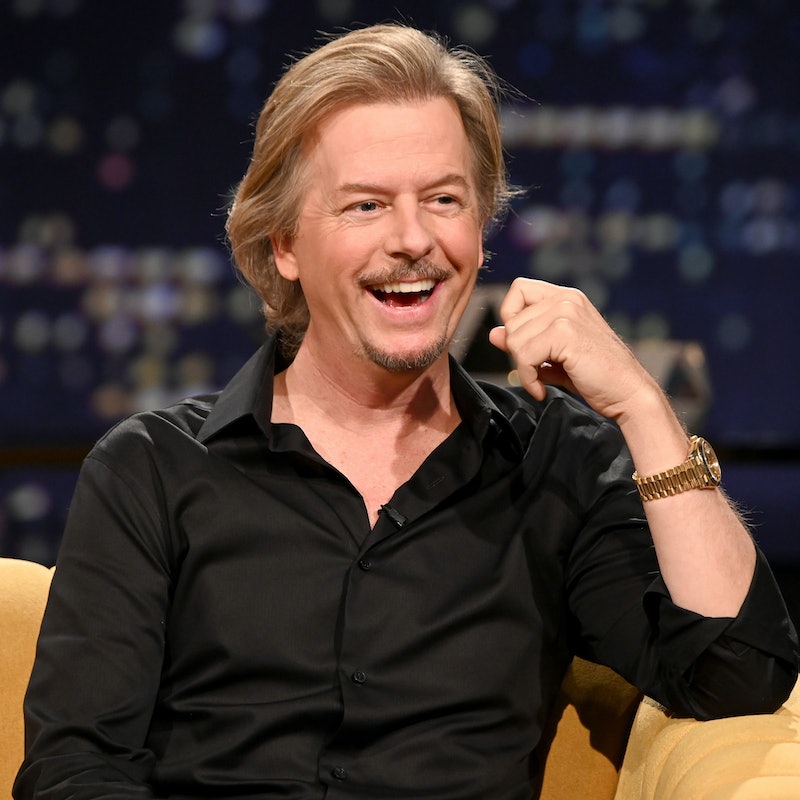 Back in 2014, Adam Sandler signed a content deal with Netflix to produce several original films for the service. The movies — The Ridiculous Six, The Do-Over, Sandy Wexler, The Week Of, and Murder Mystery — were so successful that the two parties renewed their deal at the beginning of this year. Now, the first film of the pair's second deal has arrived with The Wrong Missy — and Sandler isn't even in it. Instead, his old pal David Spade is starring in the film. So what can fans expect from the Spade character in The Wrong Missy?

The film is a romantic comedy with a plot that appears to have been transported directly from the 1990s. Spade portrays a corporate drone named Tim Morris who dreams of a life of bliss with a gorgeous woman named Missy (Molly Sims) whom he recently met at an airport, so when he is allowed to bring a plus-one to an upcoming corporate retreat in Hawaii, he decides to text her an invitation. She accepts, and he's thrilled — until she shows up on the plane. See, the Missy he texted was not his dream girl, but a different woman named Missy with whom he once went on a disastrous blind date. This Missy (Lauren Lapkus) is abrasive, annoying, and embarrassing, but now Tim is stuck with her for the duration of the retreat.

As for Spade's character, the comedian is in full-on "straight man" mode in the film, with Lapkus' character generating most of the big laughs. It's a role with which Spade has a lot of experience, going back to his early film pairings with Chris Farley in Tommy Boy and Black Sheep. In those movies, Spade was essentially the straight man, but with an acerbic twist. His sarcasm arguably provided just as many big laughs as Farley's physical comedy, making him more of a comedic focus than a typical straight man. But in The Wrong Missy, Spade's sarcasm is toned down considerably as he plays more of the sad sack, everyman-type who's basically there for jokes to bounce off of. This role is similar to Spade's character in the last Sandler-Netflix movie that he did, The Do-Over, where he played a square banker who is dragged into a criminal scandal by an eccentric old high school classmate (Sandler) after he fakes their deaths.

Spade's acting career of late has seen him shy away a bit from the sharp-tongued persona that he crafted on SNL, Just Shoot Me, and his early film career in order to play more down-to-Earth characters who let their co-stars carry the comedic load. That certainly looks to be the case in The Wrong Missy, which could prove to be a breakout film for the comedic force that is Lapkus.

More like this
Here’s Everything Coming To & Leaving Netflix In February
By Jake Viswanath
Every 'That '70s Show' Character Who Returned For The Netflix Spinoff
By Grace Wehniainen
Ashton Kutcher Wants Danny Masterson “To Be Found Innocent” In Rape Retrial
By Jake Viswanath
All The ’70s Easter Eggs You Missed In 'That ’90s Show'
By Grace Wehniainen
Get Even More From Bustle — Sign Up For The Newsletter
From hair trends to relationship advice, our daily newsletter has everything you need to sound like a person who’s on TikTok, even if you aren’t.