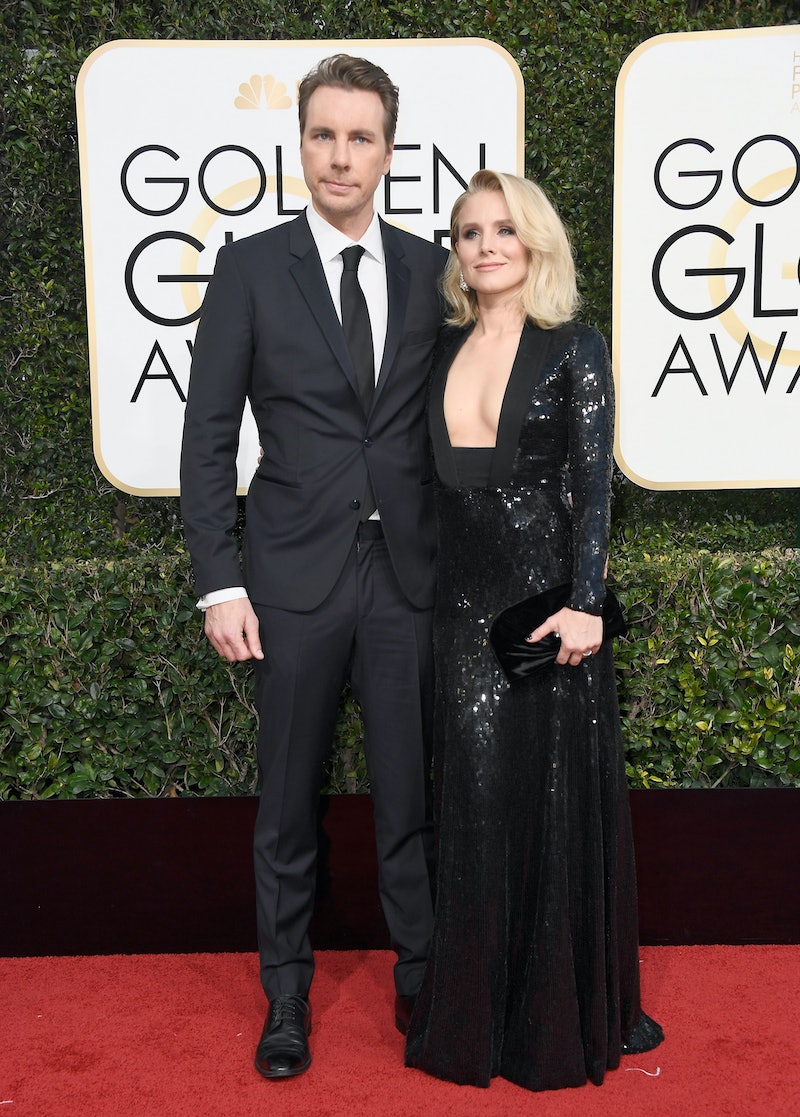 The season of giving has arrived, and to celebrate, Ashton Kutcher and Mila Kunis gave Dax Shepard and Kristen Bell a Christmas gift they'll never forget. On Friday, Dec. 14, Shepard shared a photo on Instagram of himself and Kutcher proudly holding up a shower curtain featuring a picture of Kutcher and Kunis cuddling. The super practical gift is not only useful, it's one that will make sure that the Kunis-Kutcher family is never far from Shepard and Bell's minds. And hey, the holidays are all about treasuring the people you love the most — and it's hard not to treasure someone when you see their face on a shower curtain every day.

"What a generous Christmas gift from the Kunis-Kutcher family. A beautiful shower curtain for the attic(t) bathroom!"

According to E! Online, the photo appears to have been taken at Shepard and Bell's guest house (the attic above their garage), where he records his podcast, Armchair Expert. If this is the case, then the show's future guests are going to be in for a treat when they stop by for a chat. After all, it's not every day that a person gets to hang out with Shepard and come face-to-face with a life-size portrait of Kutcher and Kunis on a shower curtain.

Kutcher and Kunis' gift may also double as a sly inside joke. In July, Shepard tweeted that while she was a guest on his podcast, the That '70s Show star became the "first female guest to make use of our open-floor plan-bathroom." If the curtain doesn't end up gracing a shower, then it looks like Shepard and Bell just found the perfect substitute for a bathroom door.

Given the fact that Kutcher and Shepard have known each other since they worked together on MTV's Punk'd way back in 2003, this gift feels weirdly perfect. If anyone is going to excel at giving joke gifts, it's these two. Now, the question the world needs answered is what will Shepard and Bell give Kutcher and Kunis that could possibly top this genius present?

The internet may never know, but one thing that you can be certain of is just how sweet the friendship between these couples is. Not only did Shepard recently join the cast of Kutcher's Netflix show, The Ranch, Kunis and Bell star in the Bad Moms franchise together. The women even debuted what the dubbed their "friendship haircuts" on Instagram in 2017.

In addition to their working relationships, the couples also know how much pressure comes with being part of a celebrity duo. Add in the part where Shepard and Bell have two young children, as do Kunis and Kutcher, and it becomes clear that these four have lots in common — including an amazing sense of humor, it seems.

Got any last minute gifts left to buy? Then go ahead and channel Kunis and Kutcher's genius, and find a present that will make your loved one laugh, while also showing them that you care about their open-concept bathroom needs.