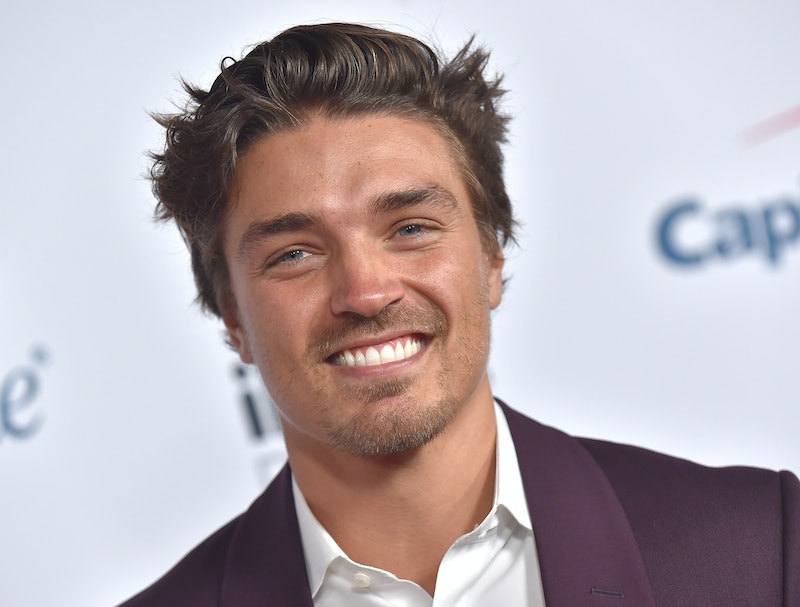 It can be tough to come up with a truly creative costume, but Bachelor in Paradise's Dean Unglert and Caelynn Miller-Keyes just nailed it. On Saturday night, Dean and Caelynn Miller dressed up as each other for Halloween 2019, demonstrating their self-awareness and their sense of humor all at the same time.

For his Caelynn costume, Dean wore a dress that was the same color as the one his girlfriend wore when arriving at the Bachelor mansion to meet Colton Underwood — complete with the "Miss Underwood" pageant sash she used to stand out in the crowd. He finished up his look with earrings, high heels, and a crown. Meanwhile, Caelynn dressed in shorts and a tie-dye T-shirt, along with a beanie and a giant mustache representing the one that Dean got so much flak for while on BiP. And as her accessory, she carried a toy camper van, which obviously is a nod to the van that Dean now lives in as he travels across the country.

"Just a dirtbag and his beauty queen," Caelynn wrote in her caption, to which Dean replied in the comments, "Just a beauty bag and his dirt queen."

Caelynn also shared some of the behind-the-scenes magic of their costumes via Instagram Stories, which included her doing Dean's makeup and him returning the favor by drawing some of his tattoos on her.

Caelynn and Dean met on Bachelor in Paradise this summer, but at first, it seemed like they wanted different things — Dean wasn't into commitment, which is what Caelynn was looking for. But by the end of the season, Dean realized he wanted a relationship with Caelynn after all, and he ended up coming back to tell her. They left the show together and have been dating ever since.

They aren't the only franchise alums to wear a Bachelor-inspired Halloween costume this year. Nick Viall dressed as Peter Weber, who is set to be the next Bachelor when the show returns in 2020 — including a forehead bandage that referenced an injury that Peter sustained while filming the show.

Over the summer, the future of Dean and Caelynn's relationship looked pretty bleak. Now, more than a month after the airing of the BiP finale, their costumes prove they're still going strong and aren't afraid to laugh at themselves, either.