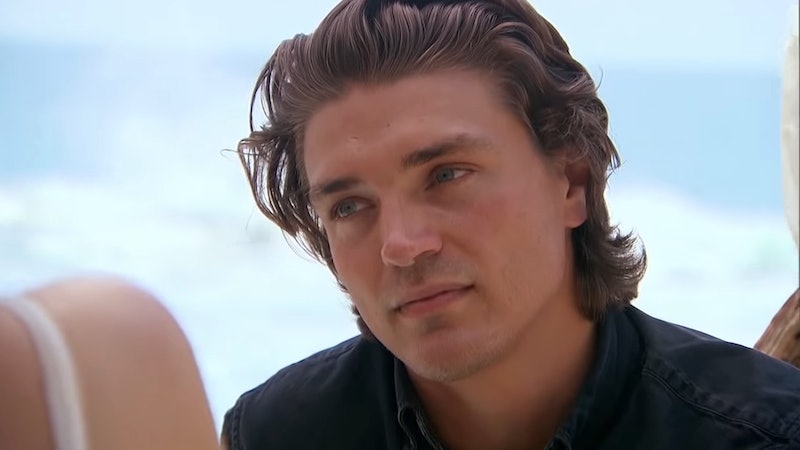 He shared a picture of himself sitting at a table with a piece of tape on his T-shirt that says "Caelynn" on it. Who was sitting on the other side of the table to snap that photo? Was it Caelynn herself? That has not been confirmed, but he did mention her in the caption.

Dean wrote, "missing baggage: if found please return to @caelynnmillerkeyes omw back to #bachelorinparadise tonight with a new look."

There's no mystery here: Dean will be back in Mexico with one intention in mind: getting back with Caelynn. And, thankfully, he did not bring that mustache with him. That's right, he is so into Caelynn that he (finally) shaved off that infamous facial hair. That's a definite sign of commitment.

The trailer for Dean's BiP comeback has been circulating for about a week. With that said, pretty much no viewers are surprised by that social media post. And that's because they have been posting about each other a lot, which would be an odd thing for exes to do — i.e. this is pretty much a huge hint that are probably dating after Paradise.

Let's look at the additional social media evidence. On Aug. 16, Dean posted a video of Caelynn kissing him on the cheek with the caption "when you grow a mustache and move into a van in an effort to effectively remove yourself from the dating pool but then you meet someone who’s into that weird shit." That really seemed like a another big hint. Again. However, Dean left the season Bachelor in Paradise during the Aug. 26 episode.

Caelynn commented with a joke on that post, prompting Dean to point out that she doesn't even follow him on Instagram. For the record, he's not following her, either, but maybe that's their way of distancing themselves for each other to prevent spoilers. Then again, they have been posting about each other a lot, which again, would be an odd thing to do if they weren't currently together.

Caelynn reflected on her tough season with an Aug. 26 Instagram post. She shared a picture of her and Dean kissing each other during filming and wrote, "A rare moment where Paradise actually felt like paradise."

The timing of this is pretty interesting since Caelynn shared this on the night the episode aired with Dean's heartbreaking departure from the season. It would have been easy for her to throw some shade or write something sad that night, but instead she kept it positive, and full of PDA.

And, yes, Dean commented on the photo, serving as the 923,424,525th piece of evidence that they are (probably) dating post-show.

Not only that, but Dean was very vocal with his support for Caelynn after Blake Horstmann leaked their private texts from Stagecoach weekend.

Unless Dean and Caelynn are the best actors in the world, all signs point to the conclusion that they are an item outside of the show. Will she give him a rose during the next episode? Will they forgo the roses, leave the resort, and just hop into this van? The specifics are unclear, but as of this moment, they have to be dating, right? Here's hoping.