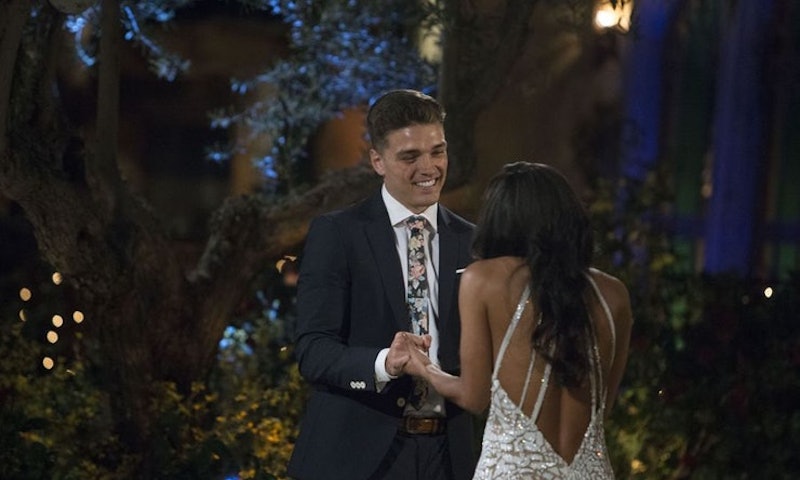 Just when you were still trying to wipe your tears following Dean Unglert's Bachelorette elimination during Monday night's episode, good news came along: Dean has joined Bachelor In Paradise Season 4 as another contestant trying to find love this summer. There were already rumors that Dean would appear on the Bachelor spinoff series, but the show’s official Twitter account confirmed the big news on Tuesday morning in a tweet that read, "We are excited to announce that @dean_unglert's journey to find love will continue in Paradise! #BachelorInParadise."

At the moment, the cast includes familiar names like Raven Gates, Amanda Stanton, Derek Peth, Kristina Schulman, Ben Zorn, and many, many more. And Dean joins the show just a month after production on the Season 4 was briefly halted after a producer filed a complaint about an alleged sexual encounter that may have not been consensual between two cast members, Corinne Olympios and DeMario Jackson. Warner Bros. launched an investigation into the allegations and later released a statement that they had found no evidence of any wrongdoing and that filming would resume. "We plan to implement certain changes to the show’s policies and procedures to enhance and further ensure the safety and security of all participants,” the statement read.

Dean was a fan-favorite for most of his time on Rachel's Bachelorette season, which made his elimination that much more devastating. On Monday’s hometown dates episode, Dean introduced Rachel to his father, after revealing that he hadn’t spoken to him in over two years. Throughout the entire ordeal, Dean seemed like he didn't really know what to expect from the sit-down, but things took a turn when he and his father ended up getting into a fight that even made fans of the show uncomfortable. Needless to say, it was a little heartbreaking to watch him get eliminated after a moment like that.

Dean’s time on The Bachelorette was pretty low-key, and his easy-going nature made him instantly lovable. His stint on BiP will probably be no different.