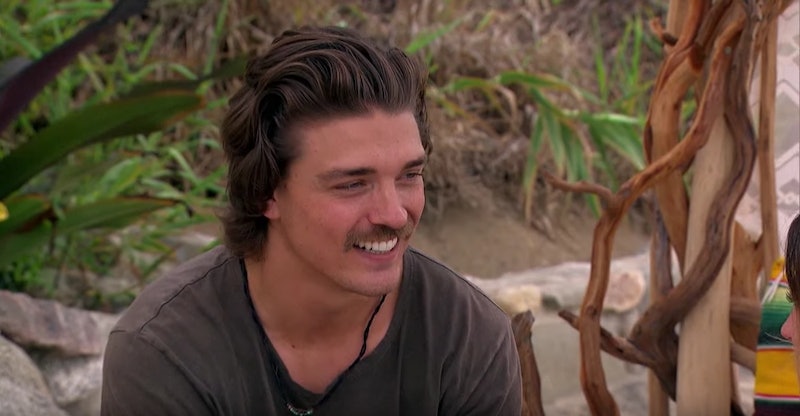 Knowing that he would join the beach eventually, fans have been anticipating Dean's arrival on Bachelor in Paradise for a while. But some were afraid of what would happen when he got there, considering his ex-girlfriend Kristina Schulman would be there, too. In Season 5, the two were in a gnarly love triangle with Danielle Lombard that left Kristina heartbroken. Needless to say, the anticipation for their reunion was at an all time high. However, Dean's Bachelor In Paradise reunion with Kristina was, apparently, way less awkward than it seemed. At least, Dean thinks so.

Last year, Dean received a lot of backlash for leading two girls on for so long — so much that he quickly became the villain of the season. You'd think he'd be nervous to return to Mexico, especially considering Kristina's presence. Oddly enough, though, when he greeted Chris Harrison at the top of the stairs on BiP's Season 6, he didn't seem nervous at all. In fact, in the August 13 episode of the Help! I Suck at Dating podcast, he said seeing Kristina again in the same place they fell in love wasn't awkward in the slightest.

"So walking into Paradise for the second time with one of my exes on the beach…you would think it would be a little awkward," he said. "But in all honesty, it wasn't." He went on to say that he texted Schulman before signing up for Sesaon 6 to give her a heads up. He also let her know that he would "fully support" her in a new relationship if she were to develop one there.

"I basically was telling her I hope this isn't going to be awkward," he said of a text he sent her before the show. "If you're interested in someone down there, I hope you know that you have my vote of confidence or, like, my vote of support for you."

When he arrived on the beach, Dean said he was "apprehensive to this whole situation," but once he started chatting with everyone, he seemed to fit right in. He even pulled Kristina aside for a quick catch-up and to show her that he's changed. "I'm bolder, more mature, wiser," he said. "I have a mustache now." Looking back at that moment, Dean insisted on the podcast, "It really wasn't super awkward."

Of course, he couldn't speak for how Kristina felt, and so far on Bachelor in Paradise, the two have only had a few minutes of interaction. And, if the interaction was awkward for her, she didn't let it show. So, who knows, they could maintain their distance for the foreseeable future, or maybe they won't. Everyone knows that anything can happen in Paradise.

That said, it seems like Dean is ready to move on to other relationships. In his first episode back, Dean talked to Caelynn and ultimately ended up taking her on a very successful date. Until Dean's arrival, Caelynn wasn't having the best time in Paradise because of drama surrounding her past with Blake. But everything changed when he arrived, and based on rumors that Caelynn and Dean are dating post-Paradise, their relationship will likely continue to flourish on screen. Maybe second time on Paradise really is the charm.