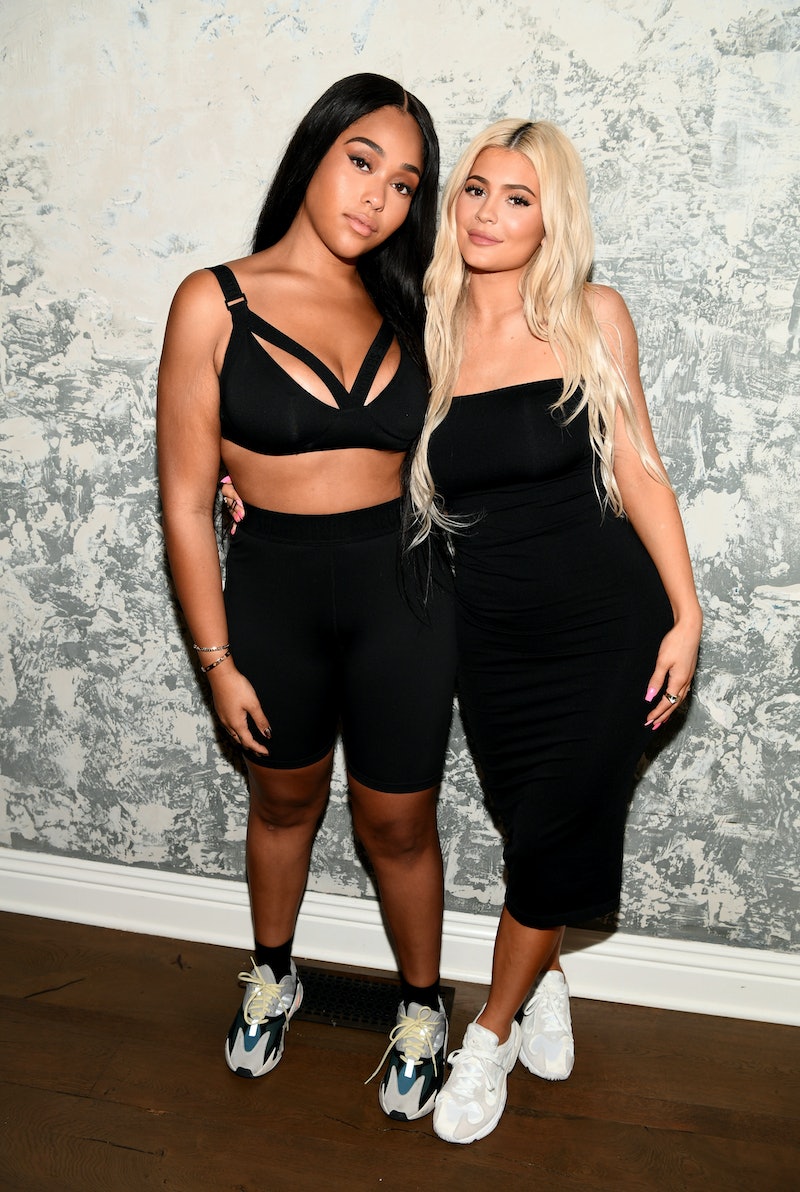 Were fans wrong about all that Instagram-related shade? The world may never know. However, new details about Kylie Jenner and Jordyn Woods' recent run-in at their mutual friend Stassie Karanikolaou's birthday party, as reported by E! News, suggest that the former BFFs actually ended up keeping things pretty cordial. Now, that doesn't exactly confirm that Jenner didn't shade Woods, but it sounds like their IRL reunion was drama-free at the very least.

OK, let's talk background here first. On June 7, former ride-or-die BFFs, Jenner and Woods, attended Stassie's birthday party at Bootsy Bellows in Los Angeles, as per TMZ. Ever since Woods has seemingly fallen out of the Kardashian-Jenner family's good graces, though, Jenner has been spending a *lot* of solo time with Stassie instead. Not only that, but she's dedicated more than a few social media posts to Stassie in honor of her birthday, which had some fans thinking that she was throwing not-so-subtle shade at Woods.

Right, so, Jenner and Woods went to the same party, and most people would probably assume that drama ensued. Well, it didn't. Not by how one insider described their interaction that evening to E! News, at least. According to their source, when Woods arrived, Jenner was hanging out with their pal Jaden Smith. "Jordyn arrived with a few girlfriends with her and immediately said hello to Jaden and Stassie," the source claimed. "Kylie didn't avoid Jordyn at all and was very cordial. She said hello very briefly and they both smiled at each other."

But wait — there's more! "[Jenner and Woods] didn't interact much after that at all but they did acknowledge each other and then went on with the party going separate ways," the source said to E! News. Sounds pretty mature of them, right?

The insider then added, "[Jenner] wanted the night to be drama free," and, "everyone was dancing and it was a great night for Stassie and her friends." Well, that's good. Perhaps there's hope for Jenner and Woods' friendship yet. It might take some more time for their wounds to heal, but at least they're not out there like, brawling in public or causing a scene.

In case you've somehow missed it, Jenner's sister, Khloé Kardashian, split from boyfriend Tristan Thompson back in February after reports surfaced claiming that he cheated with Woods. (Woods denied being "intimate" with Thompson, though she did say he kissed her on the lips. Thompson has not addressed the claims at all.) Woods and Jenner had been long-time best friends — she was even living with the Kylie Cosmetics founder when this all went down — and the incident with Thompson seemingly shattered their friendship.

While it's sad that Jenner and Woods are no longer hanging out on the regular, it's definitely a good sign that they're able to be in the same room together. "Kylie doesn't have any bad blood against Jordyn and truly wants to be cordial with her," a source close to Jenner also told E! News. "Their circle is small and they both knew they would run into each other eventually, and Kylie doesn't want to ever deal with any drama."

That's fair. Fans will have to wait and see what the future holds for the state of Jenner and Woods' relationship, but hearing that their latest interaction wasn't a disaster is a pretty good start for now.