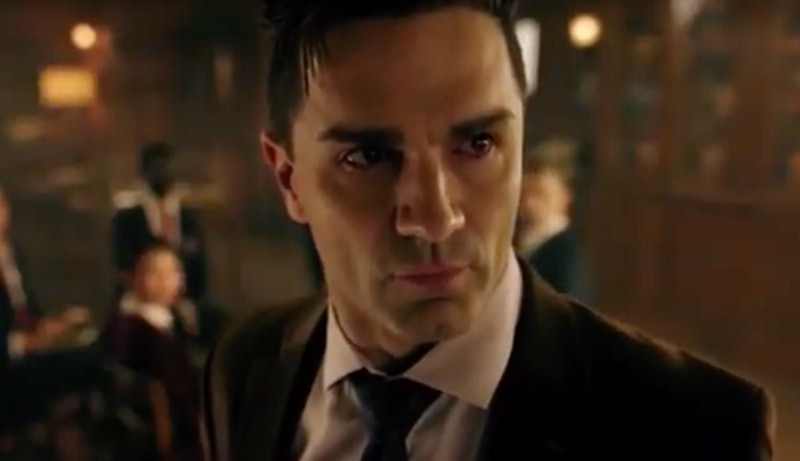 Spoilers ahead for Riverdale Season 4, Episode 7. Mr. DuPont and Bret may think Mr. Chipping's death is a closed case, but Jughead and Betty are far from convinced. And rightfully so: everything about how Mr. Chipping died is suspicious. Warning: This article contains information about suicide, which some may find triggering.

In the Nov. 13 episode, Mr. Chipping was teaching class when he abruptly stopped and leaped out of the nearest window. Jughead shouted at his fellow students to call an ambulance, but no one budged. Maybe that's because they knew it was coming?

Whatever the circumstances, both Mr. DuPont and Bret seem determined not to question what happened. "It was clearly a suicide, you saw it with your own eyes," Mr. DuPont tells Jughead in the Nov. 20 episode. Later, Bret echoes a similar statement. So let's talk about what we did see.

Right before Mr. Chipping's death, he was teaching about Joseph Conrad's Heart of Darkness, which he described as being "about the loss of a man's moral compass." He barely made it through that sentence when he stopped, told Jughead he was sorry he didn't help him more, and jumped out of the window.

According to Bret and Donna, this is because Mr. Chipping, while trying to teach his students about morality, could no longer handle his own indiscretions. Donna reveals in the Nov. 20 episode that she and Mr. Chipping had been seeing each other, and that he became violent when she tried to break it off. She even threatened to go to the headmaster about it, and while she didn't at the time, Bret suggests the threat was enough to put Mr. Chipping over the edge. "I guess there's no doubt about it anymore," he tells Jughead at the end of the episode. "Chipping's death was a suicide driven by a guilty man's fear of exposure. Case closed, Detective Jones."

The way he said that made Jughead even more suspicious, and viewers should be too. Considering that when Mr. Chipping's character was announced, he was described as having a "darkness hidden far beneath the surface," it's certainly possible that Donna was telling the truth about their affair and the violence that Chipping exhibited when she tried to end it. Mr. DuPont also told Jughead that Mr. Chipping "had many demons"...but Mr. DuPont blamed Mr. Chipping's death on alcohol misuse, too. So which is it?

The answer will likely come in a few weeks. The Dec. 4 episode seems to focus elsewhere, with the synopsis revolving around Riverdale High guidance counselor Mrs. Burble (Suits' Gina Torres). But Riverdale creator Roberto Aguirre-Sacasa has promised the midseason finale will reveal Jughead's true fate — and many fans have speculated that involves Bret.

Which brings us back to Mr. Chipping. When Bret told Jughead that the case was closed and called him "Detective Jones," it sort of seemed like he was threatening that if Jughead kept digging, it would end poorly for him. Maybe that's why Jughead dies, because he doesn't stop looking for answers. Mr. Chipping's family supposedly didn't want an investigation, but Betty has a full-on murder board of suspects, so it doesn't seem like she and Jug are letting this go.

Motivation wise, there are a variety of reasons Bret might have wanted Mr. Chipping dead. Maybe he likes Donna and wanted revenge for what Chipping did to her, or maybe he's on Mr. DuPont's side and wanted to stop Mr. Chipping from helping Jughead expose Mr. DuPont as a plagiarist. There's also mounting evidence against him, like the fact that he didn't look surprised when Mr. Chipping died or make any effort to call an ambulance, and that he had a suicide note seemingly written by Mr. Chipping in his pocket. He said it was part of a writing exercise, but that feels like too big of a coincidence. Plus, Bret really wants Jughead to stop his investigation — which is a pretty sure sign of guilt.

It's unclear how Bret could have been involved in Mr. Chippings' death, but this is Riverdale. Nothing is ever as straightforward as it seems.