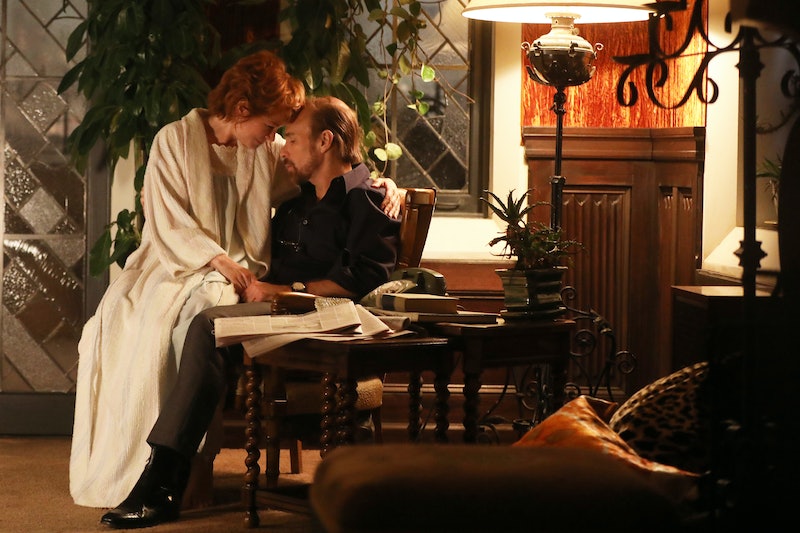 Bob Fosse and Gwen Verdon were partners personally and professionally. But as Fosse/Verdon showed in its premiere episode, they had a fair share of troubles due to Fosse's substance abuse and infidelity. Although their marriage will continue to disintegrate on the FX miniseries, Fosse and Verdon never divorced. That doesn't mean the couple was living in domestic bliss until Fosse's death in 1987 — just that they didn't legally end their marriage. And throughout their unconventional partnership, they remained close — much closer than you'd expect for a separated married couple.

The first episode of Fosse/Verdon ended with Michelle Williams' Verdon about to walk in on Sam Rockwell's Fosse cheating on her. While his many infidelities weren't a secret, Verdon had just flown from Germany to New York and back again to retrieve the perfect gorilla costume for Fosse's film Cabaret. And before she left, Fosse promised not to be with anyone else when she got back. As the second episode will depict on April 16, this was the breaking point for Verdon and their marriage.

In a 1973 interview with the New York Times, Fosse said his relationship with Verdon ended in May 1971. The publication noted that Fosse had "three divorces" (one from Verdon and two from his previous marriages with dancers Mary Ann Niles and Joan McCracken). But Fosse himself only referred to the split from Verdon as a "separation," Like when he explained his relationship with their 10-year-old daughter Nicole. "I see her three or four times a week when I'm in New York," Fosse said. "She seems to like me, and to have accepted the separation. But you see she goes to this school where half the parents are divorced."

Following his death of a heart attack at the age of 60, outlets like The Washington Post and Los Angeles Times also inaccurately wrote that Fosse and Verdon been divorced. At the time of his death, Verdon and Fosse had been working on a revival of the musical Sweet Charity together and she was with him when he collapsed on the streets of Washington D.C. By the time that Verdon died in 2000, the record regarding the status of their marriage had been set straight — The New York Times correctly reported in her obituary that the pair had separated in 1971 but never divorced. She never remarried after Fosse's death and the New York Times noted how she "wholeheartedly assumed the duties of devoted widow" as she helped preserve her husband's legacy.

Like Fosse, Verdon had been divorced before her marriage to him. The New York Times obituary noted how she had eloped at the age of 17 with a writer for The Hollywood Reporter and had a son with him. But they divorced after five years or marriage and she left her son to be raised by her parents. Meanwhile, Nicole Fosse — who is a consultant and producer on Fosse/Verdon — had a front row seat to her parents' dysfunctional relationship. Ahead of the premiere of Fosse/Verdon, Nicole told The Washington Post, "My father was a loving family man, and then there's this other stuff. He was completely contradictory. It must have been torturous for him. He believed in the sanctity of marriage, but he couldn't do it himself. And that creates self-loathing. I've come to see it as a spiritual split."

Back in his New York Times interview in 1973, Fosse said that he probably wouldn't ever marry again following his split from Verdon. And considering their marital status at the time of his death, he stuck to that. Although he did have plenty of other relationships — like with performers Ann Reinking and Jessica Lange, who both appeared in his semi-autobiographical film All That Jazz. In another interview with NYT just one year before his death, he claimed, "I certainly don't pursue ladies as much as I used to." He added that "I really messed marriage up, and there is a lot of regret," but still referred to Verdon as his "best friend."

These friends and collaborators continued to create together after their separation up until Fosse's death. So while they couldn't make their marriage work in the traditional sense, the connection shared by Fosse and Verdon was clearly something very special that neither of them ever fully let go of.