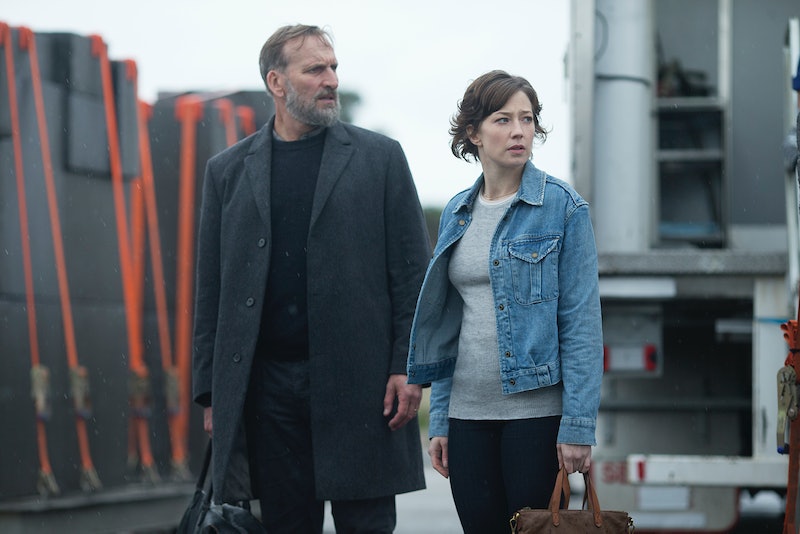 Heading into the climactic and wholly surprising series finale of The Leftovers, both of the show's protagonists — messianic cop Kevin Garvey and pragmatic DSD investigator Nora Durst — were about to undertake or had just undertaken a journey to another plane of existence. While the penultimate episode saw Kevin travel to the afterlife (or his own subconscious) in order to wrestle with his own demons, the finale itself followed up on the question of whether or not Nora would go through the LADR device, as she seemed hellbent on doing a couple of episodes ago.

The finale picked up right where the show had left Nora, having just approached the scientists about putting herself through their radiation machine. After saying goodbye to her older brother, Matt Jamison (who's dying of terminal cancer), Nora strips down, climbs into the device, and — just as she's being submerged in the liquid that would eventually vaporize her — she shouts out one word. The viewer doesn't get to hear the word, but it certainly seems like she was about to say, "Stop!"

From there, the episode leaps ahead in time to follow up on the Season 3 premiere flashforward, with an older Nora carting doves back and forth to an Australian church. So did Nora go through the device? Or did she change her mind?

Once Kevin shows up on her doorstep — and after a disorienting sequence in which he acts like their entire relationship never happened — it becomes clear that Nora is still in the same world, and she's simply been living in Australia ever since she changed her mind about the device. (It's also revealed that the only contact she's had with anyone back home in the States is with Laurie, who also apparently changed her mind about her own suicide those many years ago.)

Except, this being a show by Lost's Damon Lindelof, there is of course one last huge twist waiting before the end. In a devastating monologue, Nora explains to Kevin that she didn't change her mind: she did go through the device… and she found herself in a dimension where 98 percent of the world's population had vanished seven years ago, and the other two percent were living in the ruins of civilization. With no airplanes in this reality, Nora undertook a long and torturous journey from Australia to Mapleton, New York, to look for her children.

When she got to her old house, she watched from across the street and saw her children — a teenage Jeremy and an 11-year-old Erin — along with her husband, Doug, and his new wife, all smiling and apparently happy enough in the life they'd made for themselves there. Realizing that her children didn't need her anymore and that there was no place for her in this reality — and remembering that the physicists mentioned that the scientist who invented the device was one of the first to go through it — she traveled once again to find the scientist and beg him to build another device, so she could go through it back to our world… where she's been living in solitude in Australia ever since.

I don't think anyone tuned into the finale expecting a definitive answer on where the Departed went — and I'm still not sure the show produced one, either. It's up to the viewer to decide whether or not to believe Nora's story, since none of it is shown onscreen. But if she is telling the truth, it's an elegant solution that's similar to the popular fan theory that the "leftovers" are actually the Departed people and they've been living in a sort of purgatory ever since. However, in this case it seems more like there was some sort of rupture in reality that resulted in the creation of two parallel but equally "real" dimensions, in which two percent of the population happened to land on one side of the rift, while 98 percent landed on the other.