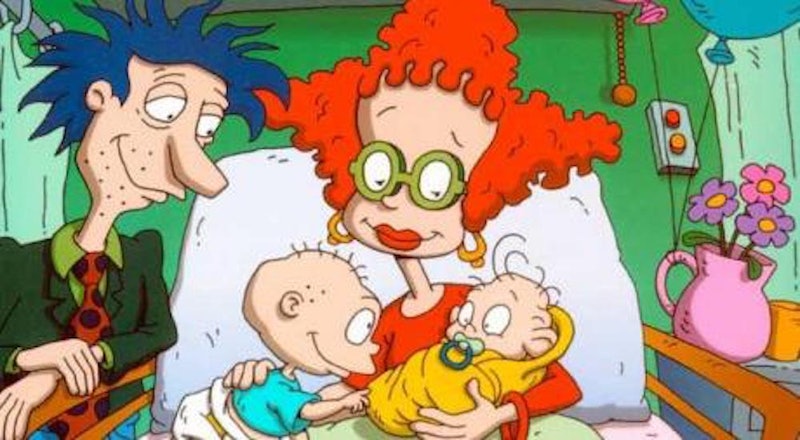 Perhaps the clearest sign that you're getting old is when you rewatch a movie from your childhood and find yourself relating to the parents more than the kids. That's not necessarily a bad thing, though. When you watch The Rugrats Movie for its 20th anniversary as an adult, it becomes obvious that it's not Tommy Pickles who's worth looking up to, but his mom. Didi Pickles was way ahead of her time. In fact, Didi feels like she's of this time, a role model for all those moms who are just trying their best yet are expected to do it all.

Melanie Chartoff, the voice of Didi, tells Bustle over the phone that it's Didi's gentle nature that kept a "household where the men are not dependable" functioning. "It's sad to say, but that’s too common a phenomenon," Chartoff explains, "where the woman in the household is the point person for every role."

Didi was not only the mother to Tommy and Dil, but the primary breadwinner of the Pickles family in the early '90s, when less than 20 percent of married moms in the U.S. were out-earning their husbands, according to the Pew Research Center. It's a number that's continued to climb since then. In 2016, the Bureau of Labor Statistics reported that 29 percent of women in heterosexual dual-income marriages out-earned their husbands. She was also the caretaker, who tried to keep things in line and dinner on the table, while her inventor husband Stu and an always tired Grandpa Lou couldn't keep the babies from walking right out the door they accidentally left open.

Didi wasn't a perfect mom, though. She was stressed out, overworked, preoccupied, and certainly under-appreciated. It might be why she lost track of the kids more than a few times herself. But she didn't have to be anything other than her loving and caring self, that's where her real power lies and also the power of many other parents.

"Didi was a soft of anxious, very devoted mommy," Chartoff says, "which could be said of any parent." Including the voice actor's own mom, who, now, at 94, lives in the "condo that the Rugrats bought," which feels only right being that she was the inspiration behind Didi's voice. "It was kind of a repressed but anxious person," Chartoff says while switching into the character's familiar squeak. "A person trying to keep control but losing control all the time."

When Rugrats first premiered in 1991, Didi was portrayed as "the warm and tender Earth mother," according to Chartoff, who did everything by child psychologist Dr. Lipschitz's book. In 1998, Rugrats creator Arlene Klasky told the New York Times she saw some of herself in Didi. ''I didn't know what I was doing,'' she explained. ''I used all the childhood development books.''

Now in this age of Goop where self-care is a permanent fixture in our personal healthcare plans, Didi being willing to think outside the child-rearing box doesn't feel silly at all. It feels appropriate, even run-of-the-mill. The character, who had Tommy in her early 30s, worried about screen time, cellphone radiation, and the processed foods she was putting in her kid's mouth — all things many parents definitely worry about today, even if that seemed like overkill back in the '90s.

In The Rugrats Movie, Didi even has a conversation with her fellow moms about how they shouldn't put so much focus on the sex of her new baby. "Nuh-uh-uh, let's not do any gender stereotyping," she says. It's a surprisingly progressive statement from a cartoon character, as was her overall depiction. "Didi was the antithesis of that cold and vicious and calculating and preoccupied with work kind of mother," Chartoff says, describing a stereotype about working mothers that Rugrats made fun of with Angelica's mom, Charlotte Pickles, who was stern and always on her cellphone.

Didi might've come off to some viewers as fragile or naive, but that vulnerability actualy made her a sneaky powerful figure. "So many people would take me aside," Chartoff recalls, "and say, 'Didi was such an important character to me because my mother was working and was preoccupied. I would come home and see Didi and feel, "Oh there’s a mother in the house."'"

Rugrats is planning to return next year with a TV revival and a live-action movie, and Chartoff hopes the filmmakers will cast Didi as a progressive parent for the current times. She also hopes the show will be more progressive as a whole. "I think there will be more Asian and African-American babies and parents involved, along with gay and transgender characters," she says. "We’ll want to reflect the modern world by integrating the series so it’s not so lily white."

Chartoff thinks Didi can continue to help moms and dads, possibly those who watched Rugrats as children, see that you don't have to get it right all the time. "I think parents often recognized themselves in Didi as trying to make a living and provide a nurturing family atmosphere for her kids and not always coming through. She tried so hard but she still lost the babies," the actor says. "But, miraculously, Tommy was such a together infant with so much wisdom that apparently she didn’t do everything wrong because he turned out so well."

As kids, Rugrats showed us the world through the eyes of babies who see it as a big, wonderful, sometimes scary adventure. But rewatching Rugrats as adults, it becomes clear that for the parents, the world was an even scarier place where anything could happen to their kids. All they wanted to do was protect them, but, things often didn't go as planned. That's why for Chartoff, the real parental takeaway from Rugrats is that "somehow despite you, your kids are going to turn out OK." You don't need to have all the answers — Didi certainly didn't — but that never stopped her from being a good mom, one who parents could still learn a thing or two from today.

More like this
At 14, D'Arcy Carden Was Sneaking Out To Parties & Crying Over Kurt Cobain
By Ivana Rihter
Netflix Just Rebooted A Classic ‘90s High School Drama
By Maxine Harrison
Josh Peck Shows Love To Jennette McCurdy After Her Shocking 'iCarly' Revelations
By Radhika Menon
Lisa Kudrow Explained How Her Body Image Changed While Filming 'Friends'
By Grace Wehniainen
Get Even More From Bustle — Sign Up For The Newsletter