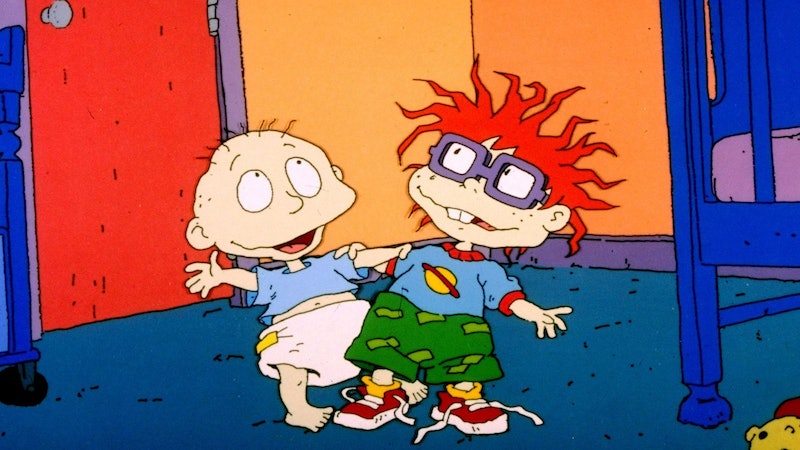 Rugrats is coming back, but it won't be exactly how '90s kids remember. Nickelodeon announced a Rugrats live-action movie slated for 2020 that will feature CGI versions of Tommy Pickles, Chuckie Finster, and the rest of the gang. While some are feeling nostalgic for the return of their favorite '90s Nicktoon, others on Twitter are a little concerned about what a CGI Rugrats will be like — or more importantly, what it might look like.

The response to the news that the Rugrats is getting a full-fledged revival with not only a movie, but a 26-episode series order, also featuring CGI was mixed. That's because many are concerned that these Rugrats might be well, really creepy. Vulture wrote it was concerned that Tommy might end up looking like a "slightly nicer looking Gollum-from-Lord-of-the-Rings in an oversized diaper." Not our precious, please.

Others seemed to agree. "CGI babies are CREEPY," Twitter user @kakapotrainer wrote, allowing the all-caps to say it all. "I AM NOT THAT NOSTALGIC," user @SharonKehoe tweeted. "Rugrats live action reboot is easily the worst news I've received this year," fan @OriginalGodFlow tweeted. "Do you realize how creepy a real life Chuckie Finster would be???"

While another fan @SonofSunday was very clear on how they were feeling. "My reaction to the news that there will be a #Rugrats movie that is a 'live-action film featuring CGI characters,'" they wrote, adding a gif featuring the word "No" displayed in the show's signature geometric graphics.

Oh, how '90s Rugrats truly was and how everyone loved it. It's why so many fans on Twitter were also a big "no" on this revival, they clearly feel it isn't necessary to update a good thing, specifically the 2-D drawing of these iconic babies. It's what made them so cute, and not at all creepy. "The idea of a live action CGI Rugrats move is appalling," user @PhillipBankss wrote. "I do not want to see 3D Klasky-Csupo babies ever," noting the production company from Rugrats' creators Arlene Klasky and Gábor Csupó that is known for its rather creepy logo of a disjointed Picasso-like face.

"Listen," @danvillehawkins wrote about the new Rugrats. "I don't want to see a live action Rugrats with CGI babies. Not for any 'childhood ruined' nonsense, but because that just sounds honestly terrifying. Some things are meant to be 2D and nothing else."

Some pointed out that they're not mad at the reboot, but they just feel like there's no need for a new Rugrats movie or series because the old one is available for streaming. "Why hate on #Rugrats getting rebooted when you can just watch the original series on @hulu," comedian Ron Funches tweeted.

But in a statement to Variety, Sarah Levy, COO of Viacom Media Networks and interim president of Nickelodeon, stressed that Nickelodeon is "thrilled for a whole new audience to meet these iconic characters in brand-new adventures." The new Rugrats series and movie will feature an updated Tommy, Chuckie, Phil, Lil, Susie and Angelica going on new adventures, that will undoubtedly be representative of this moment in time. Looking back now at the original run, it's clear Rugrats was ahead of its time and more progressive than most kid's shows. It's return could be an opportunity to tackle some tough issues in a way that kids can understand and their parents can appreciate.

Levy promised that the rebooted Rugrats would introduce new characters, but would keep the same wonder of the original. “What was true in 1991 when the original show premiered is still true today: kids are fascinated with the world of babies," she said. "We can’t wait for today’s kids to meet Tommy, Chuckie and pals.” While these Rugrats may not look the same, the hope for many fans is that it will introduce these characters to a new generation who hopefully won't be totally creeped out by CGI.