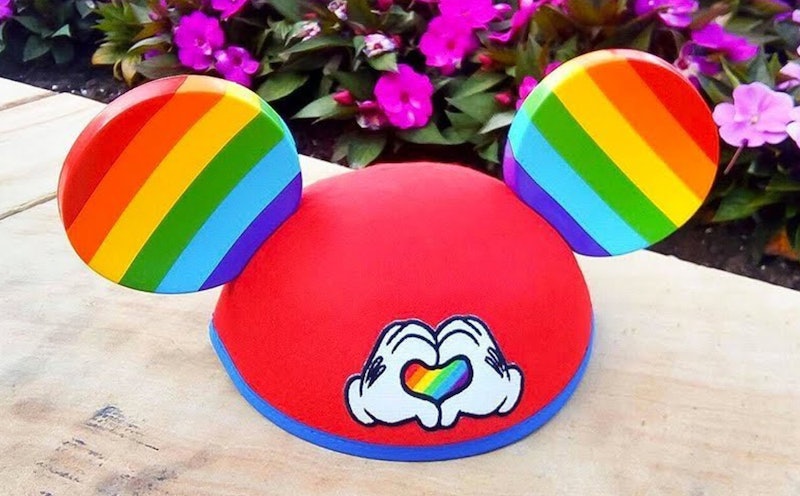 Disney stans, rejoice! A new pair of mouse ears is here to bless our mere human heads. In a move some have suggested celebrates the upcoming Pride Month in June, Disney is selling rainbow Mickey ears. While the ears retail for $18, they are only available at Disneyland and Disney World parks. So, it’ll just be the $18 plus park admission plus travel and lodging plus the cost of a Dole Whip because who can resist a Dole Whip?

Bustle has reached out to Disney to ask about the origins of the ears, and will update upon response; but a Disney spokesperson told HuffPost regarding the ears, “We offer a wide range of merchandise items that appeal to guests of diverse backgrounds.”

If you follow any Disney fan accounts on Instagram, you’ve likely already seen the rainbow ears scattered across your feed. The new mouse ears feature a red base, rainbow ears, and an embroidered patch depicting a pair of white-gloved Mickey hands forming a heart around a rainbow. According to PureWow, the official name for the ears is “Mickey Mouse Rainbow Love.” While the Pride support hasn’t been explicitly stated by Disney, many fans are interpreting the new ears as a celebratory nod to the LGBTQ+ community.

“I’m in love with these NEW Mickey ears now at the parks in time for pride!” Disney-centric Instagram account @disney4men wrote on their post sharing the rainbow ears. They also shared a picture of rainbow-themed Disney pins which they dubbed “Disney pride pins.” While perhaps not overt, Disneyheads across the internet are showing their appreciation for the rainbow-eared allusion.

Disney’s relationship with the LGBTQ+ community has been ... timid. In 2017, Disney made headlines when they announced their first gay character in the Beauty and the Beast live-action reboot. While certainly noteworthy in terms of LGBTQ+ representation in film, not everyone found the move as especially groundbreaking as Disney wanted to make it sound.

As Martha Sorren wrote for Bustle, the much talked-about scene was far more underemphasized than groundbreaking. “‘Subtle’ is a bit of an understatement,” Sorren wrote. “It was hardly even a long enough scene to truly understand what was happening. If you weren’t specifically looking for it, you could have blinked and missed it.”

There have been plenty of online petitions for a queer Disney princess, in addition to the already existing fan art reimagining the princess as queer canon. Rumors about Elsa potentially having a girlfriend in the Frozen sequel have sent the internet abuzz. While the film’s co-director Jennifer Lee has states she’s more than open to the idea, Disney has yet to confirm whether the #GiveElsaAGirlfriend hashtag will come to animated fruition.

Disney has certainly made small but significant strides when it comes to inclusion in Disney Channel programming. Late last year, Disney aired its first gay storyline on their show Andi Mack. The hour-long season premiere episode followed 13-year-old Cyrus Goodman, one of the show's main characters, through his coming out journey. In 2014, Disney’s Good Luck Charlie aired an episode featured a gay couple, a first for the channel.

“Walt Disney Studios has the weakest historical record when it comes to LGBTQ-inclusive films of all the major studios tracked in this report,” a 2017 GLAAD report states. While Disney is working to make their brand more inclusive as a whole, some see the steps as long overdue.

Are rainbow Mickey ears the be-all, end-all for LGBTQ+ representation in Disney’s brand? Far from it. Disney, like many mainstream media, have a long way to go before inclusivity appears less like a temporary marketing campaign and more like a brand pillar. However, the allusion (albeit subtle) is certainly welcome. If nothing else, rainbow mouse ears will make a lovely statement piece at your forthcoming Pride parade and colorful addition to your collection of classic, kitschy, rose gold Mickey ears accumulating in your Disney paraphernalia shrine.