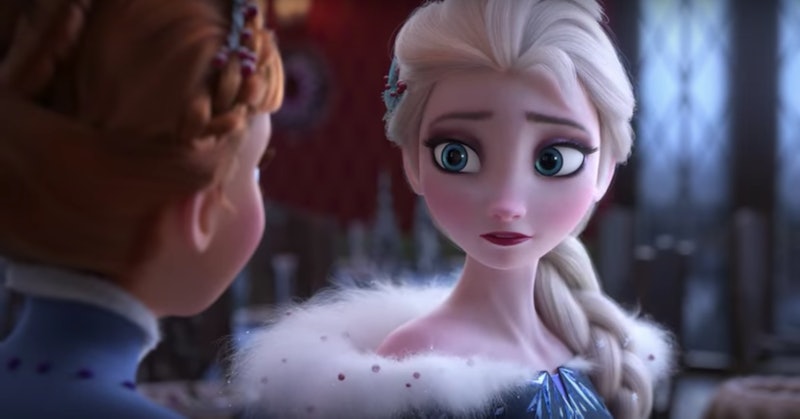 When it comes to the details of the Frozen sequel, slated for release next year, Disney lips seem frozen shut. However, a new interview may get fans hopes up. Specifically, those who have taken an interest in Elsa's love life in Frozen. After the 2013 movie, fans couldn't help but notice that "Let It Go" sounded like a coming-out anthem for Elsa. It's why some started tweeting about wanting Elsa to have a girlfriend in Frozen 2. Turns out, co-director Jennifer Lee is open to the idea.

When talking to The Huffington Post, Lee said that she was aware of the #GiveElsaAGirlfriend hashtag from 2016 and was happy to be a part of a conversation about LGBTQ+ representation in film. “I love everything people are saying [and] people are thinking about with our film ― that it’s creating dialogue," Lee said. "That Elsa is this wonderful character that speaks to so many people."

It's also gotten Lee and the rest of the Frozen 2 writers talking about Elsa's journey. “Where we’re going with it," Lee said, "we have tons of conversations about it, and we’re really conscientious about these things."

While Lee wouldn't confirm or deny whether Elsa would end up with a girlfriend in the sequel, she did say that the character will ultimately decide her own destiny. "I always write from character-out," Lee told HuffPo, "and where Elsa is and what Elsa’s doing in her life, she’s telling me every day. We’ll see where we go.”

Thanks to teen feminist and founder of the website Feminist Culture, Alexis Isabel who tweeted "Dear @Disney, #GiveElsaAGirlfriend," in 2016, many people would like to see Queen Elsa become Disney's first lesbian character in an animated movie — even the actor who plays her, Idina Menzel.

After the hashtag went viral, Menzel weighed in on the discussion of Elsa's sexuality giving it her seal of approval on the red carpet at the 2016 Billboard Music Awards. Menzel told Entertainment Tonight, "I think it's great. Disney's just gotta contend with that. I'll let them figure that out." When YouTuber Tyler Oakley interviewed Menzel, she even offered a very on-brand suggestion for who could be Elsa's love interest: Tinkerbell.

In the past few years, Disney has tried to include more LGBTQ+ representation in its movies. Last year's Beauty and the Beast live-action remake represented Gaston's sidekick Le Fou as gay. It was Disney's first openly gay character, but not everyone felt it was the milestone the movie hoped it would be. Bustle's Martha Sorren noted that Beauty and the Beast's "exclusively gay moment" did more harm than good because it showed a gay character being manipulated by the straight person he loves.

Writing a queer love story for Elsa is a chance for Disney to celebrate a different kind of love that has too often gone ignored in its movies. And this campaign isn't the only sign that people are clamoring for more LGBTQ+ representation in their Disney movies: Fans were excited when there was a possibility that a lesbian couple was featured in Finding Dory. The two women weren't seen holding hands or kissing in the trailer, but just seeing them together was a reason for people to get excited. Unfortunately, when director Andrew Stanton and producer Lindsey Collins were asked at an L.A. press conference whether the characters were Pixar's first openly gay couple they said, "Our honest answer is: maybe," adding, "We didn't ask them."

The thing is, fans wished the directors would have confirmed the couple's relationship because having more LGBTQ+ representation in these animated movies means a lot. As one fan tweeted back in 2016, "#GiveElsaAGirlfriend because LGBT kids deserve to know that there is nothing wrong with them."

It's still too early to say whether Elsa will get a girlfriend in the new movie, but Lee is certainly open to the idea. This should give people hope that sooner or later Disney will feature its first openly gay couple. In the meantime, the hashtag #GiveElsaAGirlfriend is still there for anyone who'd like to help Lee make her final decision.