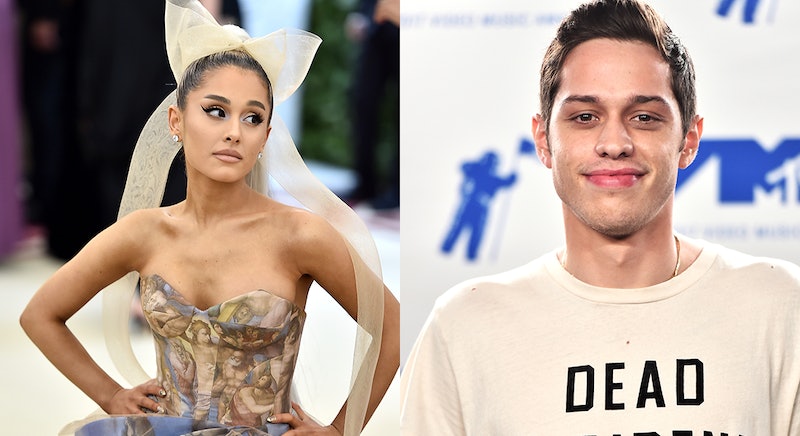 These two might be inking it up, inking it up, reportedly dating, they're living, might be inking it up. Let's get right to it: Ariana Grande and Pete Davidson may have matching tattoos. As sites such as Perez Hilton and E! Online have noted, a number of fans have noticed that Grande and Davidson have what appear to be cloud tats on their middle fingers. Neither Grande nor Davidson have confirmed they're a thing, but it looks like it's cloudy with a chance of meet-lols. Er, because they met at SNL... ? (Bustle has reached out to a rep for Grande and agent for Davidson for comment, but did not receive a response at the time of publication.)

But first, a quick rundown on the whirlwind that is the "No Tears Left to Cry" singer and the Saturday Night Live star's reported romance. On May 9, news broke that Grande and her longtime boyfriend, Mac Miller, split up. On May 16, Davidson told Complex’s Peter Rosenberg that he and his longtime girlfriend, Cazzie David, split up. Two days later, Bossip reported that an unnamed source said Grande and Davidson are now a thing. On May 19, Pete Davidson wore a sweatshirt on SNL that caught some especially observant fans' attention. On May 21, People reported that an unnamed source said Grande and Davidson’s thing “just started" and is "very casual.”

Pull on your galoshes, because we've got some clue puddles to wade through.