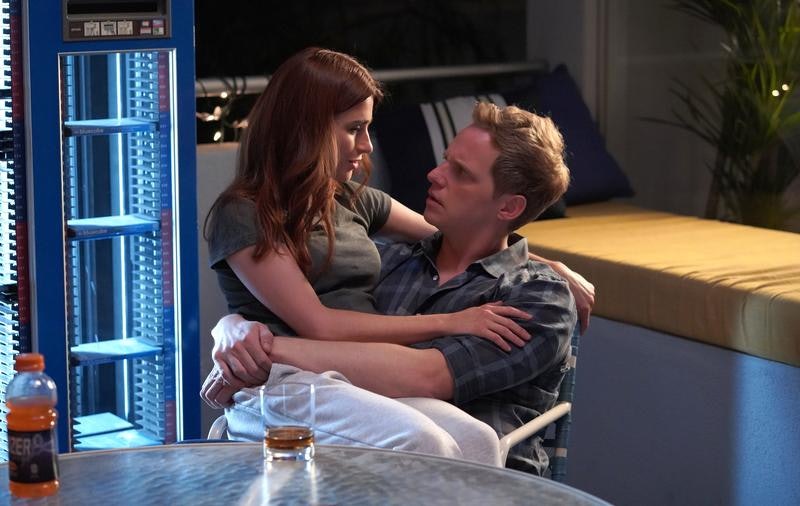 Spoilers ahead for the You're the Worst series finale. What happens when two commitment-phobes decide to get married? A lot of chaos, as it turns out. You're the Worst's series finale answered most of fans' burning questions, including whether Jimmy and Gretchen end up together. And although they technically do, it's never that simple with them, and their wedding day goes downhill fast.

The finale opens with the day of the ceremony, and while both parties are calm on the outside, they're really a bundle of nerves. Not only has Jimmy relieved Edgar of his best man duties (you know, because he told him marrying Gretchen was a huge mistake), but Gretchen enlists Sam, Sh*tstain, and Honey Nutz 3.0 (or whatever number they're on now) to write her vows.

After angrily confronting Gretchen, Jimmy admits that his are just as phony, saying he had to pretend to be someone else in order to write something that turned out to be incredibly insincere. "This ceremony is a fiction!" he tells Gretchen, overcome with an equal mix of anxiety and devastation. "It's a false guarantee that protects us from exactly nothing. It's novocaine. It's an opiate. It's a lie." So "instead of making these giant, fake, impossible-to-live-up-to pledges," as Gretchen puts it, they decide to run away, ignoring everyone's calls and texts, and eat pancakes at their favorite diner.

As an alternative to marriage, Jimmy proposes that each day, they choose whether to stay together or not. Both of them are so freaked out by monogamy that this gives them the autonomy to call it quits at any time, if they so desire. "Every day we wake up, look at each other, and say 'Today, again, I choose you,'" Jimmy explains. "Until maybe one day we don't."

It's a sentiment that's both simultaneously romantic and cynical, but Gretchen readily agrees, since she loves the idea of always having one foot out the door. In this way, their decision is the best of both worlds: they don't get their fairytale wedding, which seemed entirely out of character for them anyway, but they do get a "happy ending" befitting of their love story. And when Jimmy vows to Gretchen that every day, he will choose to love her wholeheartedly, it's immeasurably more romantic than any phony pledges he wrote as his alter-ego, Theodore.

It's also, appropriately, likely the wrong decision. Though Gretchen and Jimmy love each other, they've both hurt each other immeasurably and often, and much of Season 5 was spent re-examining all the reasons they're not right for each other. (Let's not forget F*ck Week, which Jimmy only proposed after their wedding florist gave him a blow job.) But Jimmy and Gretchen have never been too concerned with what's best for them. They do what they want, consequences be damned.

And, at least for a time, they defy the odds. We see them go through all of the motions that a traditional married couple might, like having a baby and selling their house, but they're both there because they want to be, not because they've signed some papers that say they have to be. They may still break up some day — they are Jimmy and Gretchen, after all. But it's comforting to see that they're still together despite their continued problems: true to the show's bleak realism, we see a shot of Jimmy calmly sleeping in his CPAP mask while Gretchen and their daughter sob uncontrollably beside him.

As two people who have a tendency to self-sabotage, it's commendable that Gretchen and Jimmy haven't destroyed each other, which is what Edgar was so concerned about. The ending is a poignant, beautiful way to close out You're the Worst — a show that's always portrayed its destructive protagonists with nuance — and one that feels right for the story. Anything else would seem disingenuous, and that's something, even in its darkest moments,You're the Worst never was.

More like this
Kanye West Revealed The High Percentage Of Time Kim Kardashian Raises Their Kids
By Brad Witter
Gisele Bündchen Appears To Address Those Tom Brady Divorce Rumors
By Radhika Menon
Help! I Love My Boyfriend, But I’m Struggling To See A Future With Him
By Sophia Benoit
Paul Mescal, Man Of Mystery
By Samantha Leach and Heather Hazzan
Get Even More From Bustle — Sign Up For The Newsletter