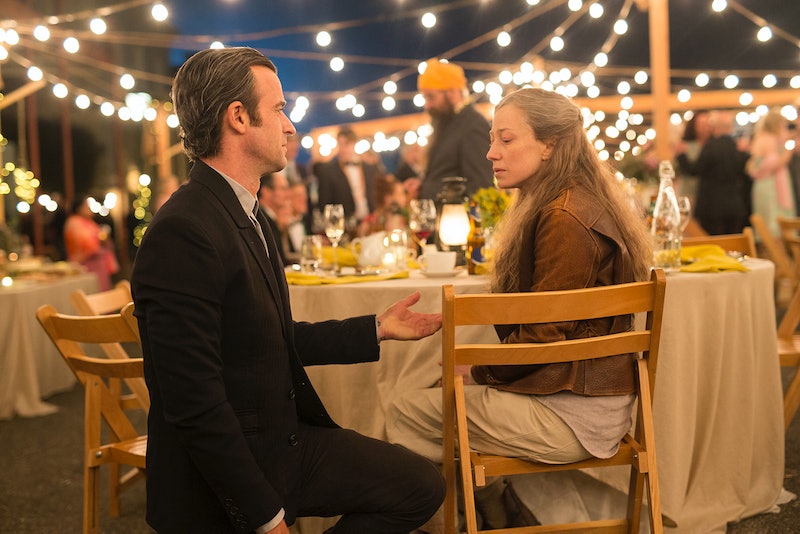 HBO's The Leftovers has been about a lot of things over the course of its three seasons and 28 episodes: family, faith, grief, and occasional forays into international assassin-ing. But in the Leftovers series finale, the entire complicated web of the show telescopes down into one surprisingly intimate bullet point: the love story between Kevin Garvey and Nora Durst. So, do Kevin and Nora get back together before the end? Or is the dysfunctional couple doomed to fail?

In the final episode, the viewer learns that Nora has been living a quiet, isolated life in Australia ever since returning from her foray through the LADR device and to the realm of the Departed. (Or ever since she changed her mind chose not to go through the device, depending on whether or not you believe her story.) Nora has made a business out of raising doves that she loans out to the local church for weddings; newlyweds are led to believe that, when the doves are released, the birds will carry their messages of love to the far corners of the globe — when in reality, the birds just return to Nora's farm to be loaned out to the next naïve couple, where she unceremoniously throws the messages away without reading them.

It's also revealed that, in the intervening years, Kevin has devoted his life to finding Nora, not believing Matt's story that she was gone for good. Every year he gets two weeks of vacation, and every year he spends those two weeks in Australia, going from town to town and showing strangers Nora's picture. It took a long time (10 years? 15? 20?), but he finally found someone who recognized her, which is how he ends up on Nora's doorstep.

At first, Kevin commits himself to a charade in which he pretends like their entire history together never happened, and the only interaction he and Nora have ever had is their brief conversation after the dance in Mapleton way back when. But when Nora tires of even more lies, he drops the pretense and begs her rekindle their relationship. Nora then tells him her story about the time she spent in the land of the Departed, and expresses her fear that Kevin wouldn't believe her. But of course he does. "Why wouldn't I?" he says. And the series ends with the couple holding hands at Nora's kitchen table, smiles on their faces and tears in their eyes.

So is it happily ever after? The finale doesn't conclude with some passionate kiss or other sweeping romantic gesture, and there's some doubt that these two dysfunctional people could ever make it work in the long-term. But while there is some ambiguity about their future together, I think The Leftovers is choosing to leave viewers with some optimism for its central couple. After all, both Kevin and Nora are incredibly changed since the last time viewers saw them.

Both characters have long been drawn to the idea that they don't belong in this world, but once they finally journeyed to another realm — Kevin to the afterlife and Nora to the other side of the Departure (if that's what you choose to believe) — they both made the active choice to return to the real world. At first, the show's protagonists dealt with their grief and the uncertainty of life by isolating themselves and escaping to a different reality; but now, they've both finally decided to stop escaping, and to simply live in the here and now. And, judging by that last shot, they've decided to live there together.

The Leftovers finale is probably still a bit too melancholy to be referred to as an outright "happy" ending… but I do think it ends on perhaps a more hopeful note than might have been expected based on where things seemed to be heading going into that last episode. Things may never be perfect for Kevin and Nora, but ultimately their love drew them back to reality and back to each other; and if happy endings don't exist anymore in such an uncertain world, it's comforting to know that at least love still does.