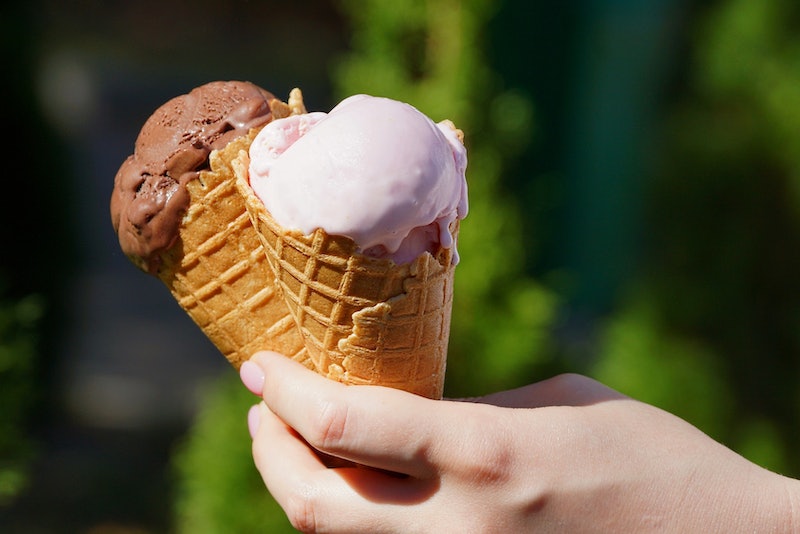 I’ve heard a lot of things recommended as “hangover cures” over the years, but it was only recently that I realized, “Does ice cream help hangovers?” is a thing people do, in fact, wonder about. And apparently there’s good reason for that, too: The rise of Gyeondyo-bar, an “anti-hangover” ice cream bar from South Korea, has piqued the internet’s interest in ice cream as a possible hangover remedy. I’ll tell you right now that you probably shouldn’t get too excited about the idea — but at the same time, there might actually be some merit in it the whole thing, so at least there's that.

Gyeondyo-bar is far from new; indeed, it first debuted nearly two years ago, in May of 2016, although it's been going viral again recently because... well, everyone loves a gimmicky hangover cure. A grapefruit-flavored iced treat, Gyeondyo-bar's active ingredient is Hovenia dulcis juice — or, colloquially, oriental, Japanese, or Chinese raisin tree juice. Hovenia dulcis has been used as a hangover remedy in many Asian countries for centuries; it's believed that it first appeared listed as such in the Tang Materia Medica, a text from Tang dynasty China that is known to be the first state pharmacopoeia in the world. According to Reuters, the plant's usage in Korea can be traced back to one of the country’s 17th century medical text.

The ice cream bar, whose name means roughly “hang in there,” includes 0.7 percent Hovenia dulcis juice for the purposes of lessening hangover symptoms. It’s sold at convenience stores in South Korea. Here's what it looks like:

I’ll admit that I was initially quite skeptical of Gyeondyo-bar’s purported anti-hangover properties; although there are some things you can do or eat to care for your symptoms, it’s pretty well-known that fail-proof “hangover cures” just don’t exist. It turns out, however, there is actually some recent research that backs up Hovenia dulcis’ efficacy in the face of the hangover from hell. In 2012, a study published in the Journal of Neuroscience found that the plant did reduce both alcohol intoxication and withdrawal symptoms in rats, thanks to the amounts of the flavonoid component Dihydromyricetin (DHM) it contains. DHM has been shown to reduce circulating alcohol levels, protect the livers, and function as an anti-inflammatory in rodents, which means there’s a fairly decent chance it could do the same for humans.

DHM’s possible hangover-reducing properties are particularly interesting when taken in conjunction with the work of a group of scientists who have dubbed themselves the Alcohol Hangover Research Group (AHRG). Since 2009, the AHRG have been studying hangovers — and it turns out that, according to their research as reported by Wired, a lot of what we think we know about hangovers is wrong (they can’t, for example, be chalked up wholly to low blood sugar, because simply administering glucose and fructose doesn’t help them go away). What the AHRG has confirmed is that hangovers tend to occur when you get your blood alcohol concentration above 0.1 percent, that you’ll feel the worst 12 to 14 hours after that (that’s when your BAC is at or approaching zero again), that vodka does tend to deliver less of a hangover than other kinds of booze, and — perhaps more importantly — that hangovers seem to be an inflammatory response.

Remember that whole thing about how DHM is an anti-inflammatory? That seems… relevant here, no?

In any event, though, it’s worth noting that the concentration of Hovenia dulcis in the Gyeondyo-bar is quite low — and, as is always the case with alleged “hangover cures,” we definitely can’t count on it to work miracles. The same is probably true of regular ice cream, too; although I’ve seen chocolate ice cream specifically recommended in a few places as a good food pick for when you’re hungover — the logic being that it “settles the stomach, rehydrates, and raises blood sugar all at once,” according to the non-profit alcohol harm reduction group HAMS — the amount of sugar in it might quash that idea before it’s even out of the gate. The AHRG’s research has actually found that hangovers more likely have something to do with high blood sugar, not low blood sugar, so eating chocolate ice cream might actually make you feel worse.

Also, getting your hands on a Gyeondyo-bar is likely to prove difficult; it doesn’t appear to be available in the United States, so you’ll probably have to actually go to South Korea to get one. But I mean, hey, in the meantime, you can always try some of the hangover foods that people in the food industry swear by, right?