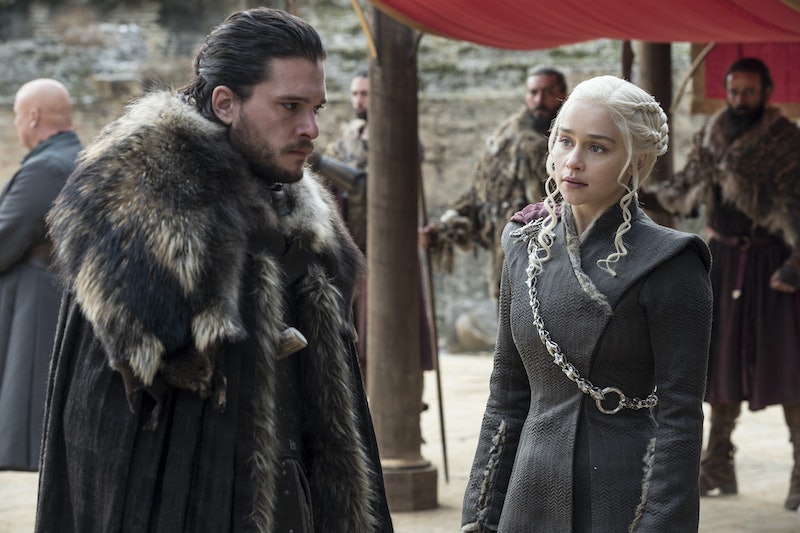 Now that his parentage has been fully revealed, does Jon have more claim to the Iron Throne than Daenerys? Without knowing the specific rules of succession that are followed in the mythical land of Westeros, it certainly seems that way. The information that the Game of Thrones audience has known for so long was finally revealed to another of the show's characters on Sunday, and its delivery seems to highlight Jon Snow's claim.

As Bran Stark explained to Samwell Tarly that the King in the North is neither a Snow, nor a Sand, nor even a bastard, he couldn't have been clearer. He said that the baby born to Rhaegar Targaryen and Lyanna Stark and raised by his mother's brother Ned was the rightful heir to the Iron Throne. And if you're wondering how he jumped ahead in the succession over his aunt Daenerys, who's older, it's a fairly simple explanation.

As you may recall, Aerys Targaryen, also known as the Mad King, held the Iron Throne before he was betrayed by a whole host of people and usurped by Robert Baratheon. So, immediately, there's conflict about who is entitled to sit the throne, and it's led directly to the conflict that we've been witnessing for seven seasons. Many camps believe that King Robert was the rightful king, after his defeat of Aerys, but we'll be following the other fork and assuming that the Targaryens are the true royals.

In that case, after the death of Aerys, the crown should have passed to his eldest child, Rhaegar. That's according to the rule of primogeniture, which says succession passes through the firstborn child; the rule is followed in much of Europe, which Westeros seems largely modeled after. That process would have been repeated for Rhaegar's firstborn, but the prince was believed to have died childless.

That left Rhaegar's siblings, Daenerys and Viserys, who became first and second in line for the throne and had to go into hiding, because everyone was trying to kill them all the time. After Visery's death, and under absolute primogeniture, which does not take gender into account for succession, Daenerys was set up as the rightful Queen of the Iron Throne. Which brings us to where we are today.

Except, Rhaegar didn't actually die childless, as we now know. He had a son, Jon Snow, who jumps right to the top of the line of succession. For context, you can look at the British Royal Family. Currently, Queen Elizabeth holds the throne. When she dies or abdicates, it will pass to her eldest child, Prince Charles, also known as the heir apparent. Then, it will pass from him to his eldest child, Prince William, who's second in line. If Prince William didn't have children, the succession would pass to his brother, Prince Harry. But since he does, Harry is slotted behind his nephew and niece, fifth in line for the throne behind Prince George and Princess Charlotte.

Applying this same real-world logic to Game of Thrones, Jon Snow, aka Aegon Targaryen, should be sitting on the Iron Throne, and Daenerys Targaryen would be the heir apparent. And if the two of them had a baby, Daenerys would likely become third in line for the throne, behind her own child. Does your brain hurt yet? Well, just imagine how Dany's will be feeling once she realizes that, not only did she have sex with her blood relative, but he has a better claim to the Iron Throne than she does.