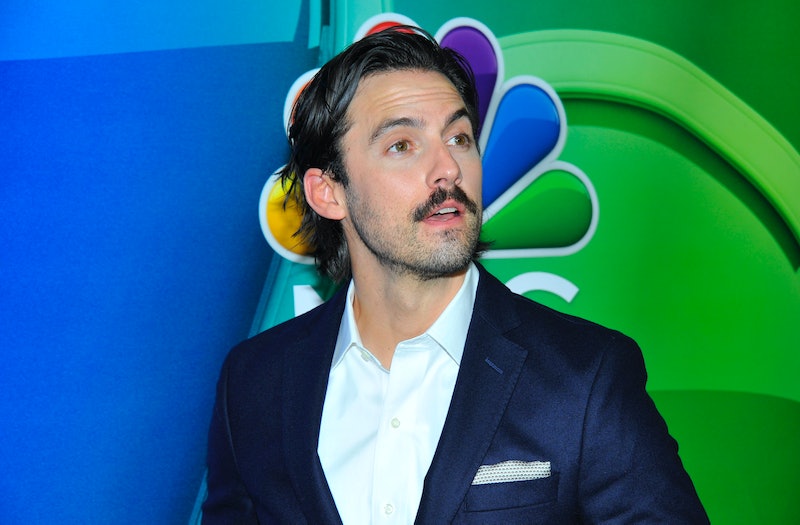 Milo Ventimiglia pulls off that bad boy vibe so well. I mean, I literally still start heavy-breathing whenever Jess comes on the screen in Gilmore Girls and I know I'm not the only one. But does the This is Us actor take part in one of the world's traditionally "bad boy" customs? Does Milo Ventimiglia have any tattoos? On one hand "bad boys" have tattoos, on the other hand actors are less inclined to do so because one never knows what sort of characters they will be asked to play.

In a Daily Mail interview with Ventimiglia, the actor admitted that he does have a few tattoos, but said "they're personal" and when he's asked by a director to show off his tattoos for a project he insists that production "cover up mine and use a fake one, because mine are mine."

So, Ventimilgia does have ink, but you won't see it in any of his on-screen performances. That does sounds pretty fair. He has a right to his privacy. Plus, the tattoos the actor has may not be the tattoos his characters would have, so they shouldn't be a part of them. An example of this showed up when Ventimiglia appeared in Fergie's video for "Big Girls Don't Cry" as a guitar-playing cutie who may or may not be purchasing drugs. The character in the video had a lot of tattoos (none of which were actually Ventimiglia's), but those tattoos represent that character, not the actor.

A fan site titled Milo Ventimiglia Archives, claims the 39-year-old has at least three tattoos: the letters "S.L.R.S." on his left shoulder, a star on his right arm, and a dragon on his left calf. The private actor chooses to not share the meanings behind these tattoos, which is kind of, in it's own way, a brooding bad boy thing to do. At the very least, it's his right.

So there you have it, Ventimiglia does have tattoos but you may never see all of them. I can't be the only who thinks his dedication to his own privacy is adorable. Ugh. Swoon.