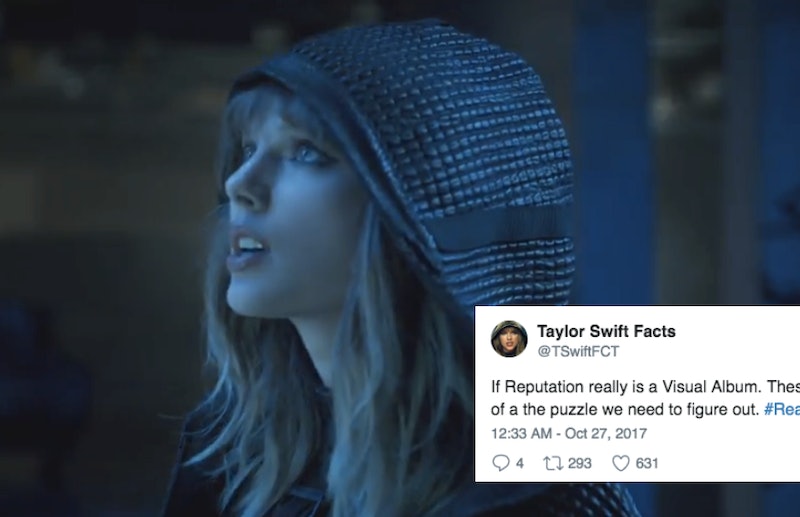 Just a week after she released the third single from her new album, Taylor Swift released the "...Ready For It?" video, marking the second video from Reputation. This brings to mind an interesting question: Does "...Ready For It?" prove Reputation is a visual album? Could Swift be following in Beyoncé's footsteps and trying her hand at making her own Lemonade? The latest video will definitely add some fuel to that fire.

When Swift's "Look What You Made Me Do" dropped, some speculated that each of the 15 versions of Swift at the end of the video represented a track on the album, which coincidentally has that exact amount of songs. That would mean that each song had its own persona, and in turn, its own video. Now that the "...Ready For It?" music video is here, the 15 personas each having their own music video doesn't seem as legitimate. Yet, that doesn't mean hopes for a visual album are dashed.

Like in "Look What You Made Me Do," Swift has multiple personas in "...Ready For It?" — two to be exact. But neither of them directly correlate to the versions of Swift at the end of her first Reputation music video. Instead, one hooded Swift is evil and controlling another Ghost In The Shell-looking Swift from inside a glass box. By the end of the video, the boxed Swift breaks free and takes control of her life.

Beyond the "...Ready For It?" music video, some people also pointed out that Swift's friend Ed Sheeran made comments that could be interpreted as him revealing that Reputation is indeed a visual album. (He previously had stated that Swift's album wouldn't be dropping until the end of the year, which turned out to be pretty true.) On Oct. 26, the "Shape Of You" singer visited the U.K. radio station Capital FM. According to ABC News Radio, Sheeran said about Swift's Reputation during the interview, "Yeah, I think the songs are great, I think the visuals, she's really putting everything in to the visuals as well, the visuals are really impressive." The line that she is "putting everything in to the visuals," has some fans thinking that this is confirmation of the visual album theory.

Another clue from before the "...Ready For It?" video came out was the fact that the director of both of the released Reputation videos, Joseph Kahn, made a comment about having 15 kids. As Reputation has 15 tracks, people thought Kahn was referencing that there will be one music video for each song — aka, a visual album.

As for how "...Ready For It?" would fit into the visual album, one fan points out how the song will be the first track on Reputation. That could mean this music video is the introduction to the visual album narrative that the "real Taylor" has broken free.

Yet since the tone of the two music videos is so similar, there's still hope for fans wanting a Reputation visual album. Until Swift or someone from her camp outright denies the visual album, the theory is not dead (unlike the old Taylor). So fans can continue to have fun figuring out how the "...Ready For It?" and "Look What You Made Me Do" music videos will fit into the bigger picture.

More like this
Taylor Swift Visited The 'Glee' Set For This Bizarre Season 5 Episode
By Grace Wehniainen
Harry Styles Is Performing At The 2023 Grammy Awards
By Jake Viswanath
"Lavender Haze" Star Laith Ashley Breaks Down Filming With Taylor Swift
By Jake Viswanath
Twitter Is In Awe Of Taylor Swift’s “Lavender Haze” Music Video
By Jake Viswanath
Get Even More From Bustle — Sign Up For The Newsletter
From hair trends to relationship advice, our daily newsletter has everything you need to sound like a person who’s on TikTok, even if you aren’t.