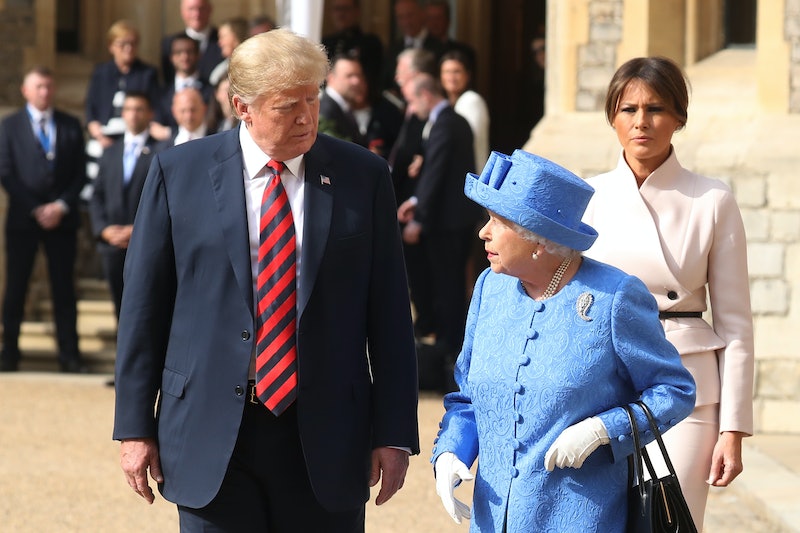 President Trump met the Queen of England on Friday during his three-day trip to the United Kingdom. There's quite a bit of etiquette that one is expected to follow when visiting with a member of the royal family, and wouldn't you know it: Trump broke the rules for meeting the queen multiple times during their one-on-one, and Twitter is not happy about it.

Those who meet the queen are expected to be punctual. According to the BBC, it's considered rude to keep the queen waiting. And yet Trump did exactly that on Friday, Vice reports, leaving the 92-year-old monarch waiting on stage for 15 minutes before descending from his helicopter and approaching her. In a development that sparked outrage across social media, the queen was seen checking her watch twice as she waited for president to arrive.

"Just turned on the news to see the queen awkwardly waiting for Trump, who is late," journalist Malcolm Turner wrote on Twitter. "Can someone remind me why we are putting ourselves through this national humiliation? What do think we are going to gain."

"Is Trump actually LATE meeting the effing QUEEN OF ENGLAND?," another angry observer tweeted. "IS THAT ORANGE HATE GOBLIN KEEPING THE ***QUEEN*** WAITING?!?!"

The uproar didn't abate when Trump, upon being introduced to the queen, didn't bow his head. He simply shook her hand. It's worth noting that this isn't technically a violation of the rules; according to the BBC, it's acceptable for guests to simply shake the queen's hand if she offers it. Etiquette expert Rupert Wesson told The Telegraph that "the queen is said to be quite relaxed about" the bowing convention. Nevertheless, many viewers were upset at what what they saw as a lack of respect to the queen by Trump (and the first lady, who didn't curtsy upon their introduction).

"I am appalled that there wasn’t a bow from D Trump or a curtsy from Melania," user @OroszParicia tweeted Friday. "Even the Queen’s children & Grandchilden pay her this honour. He definitely doesn’t deserve a State Dinner with his thinking that he is the most important person on Earth. No Donald,she is."

After their introduction, Trump ran afoul of another royal rule. It's considered rude to turn one's back to the queen, according to the BBC, and yet the president did just that as the two were walking across the lawn to "inspect" the royal guards.

There are many additional rules for meeting the queen; for instance, it's considered a no-no to have anything other than harmless small talk with her, according to the BBC, and there's a strict protocol for conversation during meals. However, it's unclear whether Trump abided by these rules, as he, the first lady and the queen headed inside for tea after their introduction, and no cameras were allowed.

Although many on social media were angry with him, Trump won't ultimately punished for breaking any of the rules he violated. According to the royals' website, "there are no obligatory codes of behaviour when meeting The Queen or a member of the Royal Family, but many people wish to observe the traditional forms."

Trump claimed shortly before his visit that the people of England like him "a lot," and yet his arrival in the country brought out throngs of protesters, who stormed the streets of London chanting "f*ck Trump." Flying over the city was an enormous balloon, shaped like Trump as a diaper-wearing baby, that activists crowdfunded prior to his arrival. The president later told The Sun that the baby Trump balloon made him feel "unwelcome" in the city — which is probably why he's avoiding it for most of his stay in the United Kingdom.