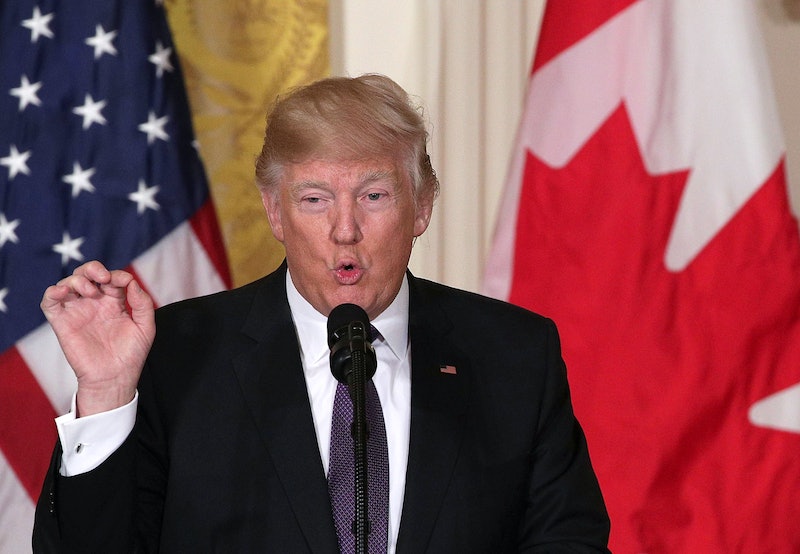 President Donald Trump signed three new executive orders last week, vowing to "restore safety for the American people." He has used that word — "safety" — many times in recent weeks. I'm not so sure he knows what the word means.

One of the new executive orders is designed to "reduce crime and restore public safety." The order calls on the now-confirmed Attorney General Jeff Sessions to create a task force that cracks down on "illegal immigration, drug trafficking, and violent crime." Trump declared that the action would focus on "enforcing the law," noting "high rates of violent crime" in American communities. Another new executive order is aimed at vehemently protecting law enforcement and harshly prosecuting those who commit "crimes of violence" against law enforcement officers. Trump is determined to "increase penalties for existing Federal crimes."

The irony here: violent crime rates have been consistently declining for decades. As James Alan Fox, the interim director of the School of Criminology and Criminal Justice at Northeastern University, told Politico: "As a nation, we are far better off than any time for the past several decades. Crime rates are low, and there is no consistent and reliable indication that things are getting worse."

Trump noted the plight of law enforcement officers during the signing, saying, "it's a shame what's been happening to our great, truly great law enforcement officers. That's going to stop as of today." He failed to mention the dozens of people who have been killed by police so far in 2017 — 121 people — or the fact that the number of fatal police shootings has reached an almost 20-year high. Meanwhile, preliminary statistics released by the FBI show that 41 law enforcement officers were feloniously killed in the line of duty in 2015 — down from 51 killed in 2014.

Violent crimes rates are not as high as they used to be — and rates of police violence are higher than ever. Yet the existing racial disparities in U.S. sentencing decisions lead to Black people, men particularly, spending 20 percent longer in the federal system than white people, despite being convicted of similar crimes.

As a Black woman, I am well aware of how the nation's inherently racist criminal justice system disproportionately affects Black people. I was suspicious of the orders, not only because they came on the heels of Jeff Sessions' confirmation as Attorney General — he has long been accused of being racist — but because the action will only add to the already troubled relationship between law enforcement and Black communities.

From the deaths of Bland, Garner, Trayvon Martin and more, I have learned that I could lose my life at any moment for speaking too loudly, for standing on a street corner, for walking with a bag of Skittles — for being too free. I can not deny the fear I feel when walking by even one police officer. White, male officers scare me most, but anyone in those blue uniforms are enough to make me avoid eye contact and shuffle by a bit quicker. I've learned that officers who kill black men often go home on paid administrative leave and face no jail time. It is a startling reality that, at any moment, I or someone I love could become a hashtag.

On any given day, I could be killed by a police officer. Photos of me could float around the internet along with the hashtag #SayHerName. I think of my brothers and sisters and their children. In the back of my mind each day is the fear that I'll get a phone call from my mother telling me that one of my brothers or sisters has been killed by police.

I believe these new executive orders will only add to the numbers of Black men and women who have become hashtags. I believe that Trump's vow to protect law enforcement officials is just a thinly-veiled attempt to equip these officers with more overarching power to profile, harass, and even kill citizens. In short: I believe Trump has declared it open season on Black people.

If that sounds like a bold claim, know that the criminal justice system has long been a tool used to oppress Black people — as is chronicled in the Netflix documentary 13th and Michelle Alexander's The New Jim Crow. This particular oppression within the criminal justice system dates back to the 1865 ratification of the 13th amendment, which abolished slavery "except as a punishment for crime" — and this proved to be a very important loophole. One of the earliest injustices as a result of this loophole was the convict lease system. As scholar and activist Angela Davis described this system in her 1983 book, Women, Race and Class,

"Through the convict lease system, Black people were forced to play the same old roles carved out for them by slavery. Men and women alike were arrested and imprisoned at the slightest pretext — in order to be leased out by the authorities as convict laborers ... In many cases sick convicts are made to toil until they drop dead in their tracks."

Now, Trump and his administration are not only looking to uphold this injustice, but to enforce it. Enforcing laws that already further oppress Black people and providing police a blanket of protection is placing more power in the hands of law enforcement officials. Increasing the consequences of crimes while allowing police the protection to harass under the guise of "keeping America safe" will only prove troublesome for citizens.

Black and brown people can already hardly walk down the street without being racially profiled and asked to produce identification. These orders will do nothing but further justify racial profiling, and we have seen proof that such an act could lead to the deaths of those being profiled. Police brutality will likely increase. What's more, protesting these executive orders itself will be increasingly dangerous for Black people. These actions will equip law enforcement officials with more power to unjustly detain and even cause physical harm to demonstrators. Bravely, this is a risk many of us have been willing to take.

These new orders are not to be taken lightly. Along with protesting such orders, we must get active locally and demand that our community leaders condemn police brutality and hold police responsible for their injustices.

Although I am afraid, I am determined to oppose and speak out against the legislation that could cost me my life. At times like these, when I see my life and the lives of those I love being threatened, I am more eager to resist. When Trump and his cohorts work to marginalize us, he will know that it will not be without a fight.