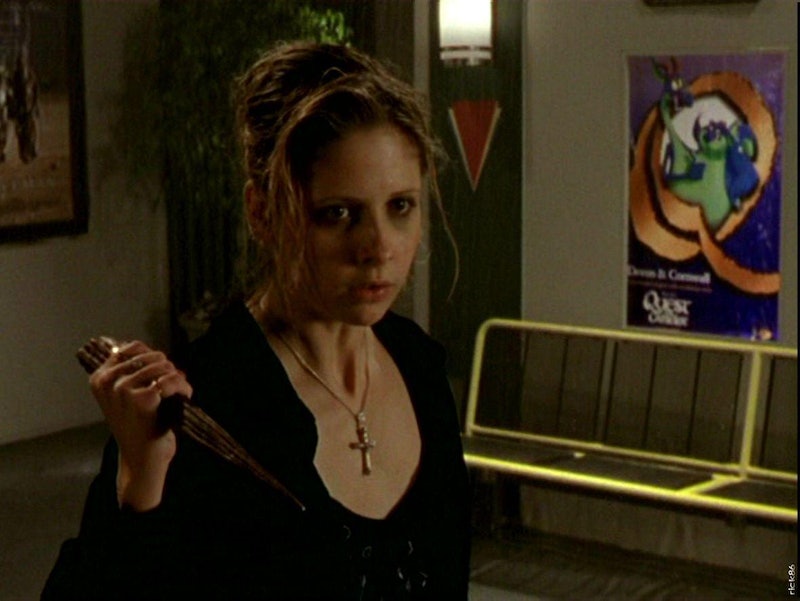 I was 13 when I first discovered Buffy The Vampire Slayer. And like the superhuman powers that were bestowed upon Buffy Summers as the chosen one of her generation, this show was the chosen one of mine and gave me strength. It's been 20 years since Buffy premiered, and I can still clearly identify how the show shaped me, and continues to shape me, as a woman. Released in an era when girl power became as much of a marketing slogan as a political one, it might seem cliché to still celebrate what some perceive to be a superficial, overall feminist message of Buffy. But make no mistake: Though the storylines and effects may seem like '90s kitsch to modern audiences, the feminism of Buffy The Vampire Slayer is absolutely real — and so was its impact.

Joss Whedon's original concept for Buffy — to take the stereotypical female victim of horror movies and make her into the hero — was a revelation to me. When I realized this as a teenage girl, I felt instantly empowered. Like many other awkward, odd young women, I was a victim of bullying, and here was a show that suggested I could be stronger than the forces that threatened me — strong enough to save myself — and not to give up, because I was destined for bigger things.

It wasn't just the physical strength of Buffy that gave me this boost either. Although I appreciated seeing a diminutive young woman being physically powerfully, the whole show for seven solid, inspiring seasons, provided glimpses of strong, female characters who smashed stereotypes.

There was Willow Rosenberg's stupendous intellect that was so powerful it could manifest in physical and magical ways. Cordelia Chase, who realized that she could use her formidable (if misspent) energy on something greater than shopping sprees and catty comments. And Anya Jenkins, who figured out that vengeance is much less satisfying than simply concentrating on love — even if that love eventually leaves you at the alter (dammit, Xander).

These were complex characters who grew and developed in ways that fans couldn't always anticipate, or necessarily approve of. These were women I recognized in some ways and admired. And that made their storylines all the more important and relatable when I was growing up. Buffy was dealing with issues that no other show dared to, but did so in ways that felt accessible by hiding the pains of adolescence, heartbreak, addiction, abuse, loss, and even misogyny behind supernatural guises.

The way the show tackled such topics was powerful — sending a message that someone, somewhere, understood our experiences, fears, and struggles. Not only that, but they could empathize with them. Buffy would take these issues and put a face on them, so that we could all benefit from the satisfaction of our heroes physically defeating them. Even if that's something we struggled to do in our own lives. They might seem a touch on the nose now, but at the time, the scores of monstrous, supernatural demons of the show provided entertaining ways for young people to identify and understand their own personal demons. These were simple parables about complicated issues.

Obviously, this was hugely significant for me as a teenager. But the show has remained a favorite of mine through various tough times as a woman still just trying to figure out how to exist in the world, and how to defeat a multitude of personal, social, and political demons on a daily basis. As the show progressed, it got much darker, and Whedon seemed to take great pleasure in really throwing beloved characters through an assault course of agony. As I've gotten older, though, I've realized that Whedon was only doing what life has a habit of doing, anyway: In many ways, it does get more difficult and darker. But just as Buffy proves, there's still a lightness to it and a fierce, fighting hope.

In high school, it may have felt like the world as we knew it was ending on a daily basis. But throughout the rest of life, as in Buffy, you manage to overcome one potentially world-ending problem, only to find that another needs solving. What Buffy continues to teach me — as a woman with a great, dependent love for pop culture — is that those Big Bads never stop coming. The world may always feel on the absolute verge on ending, but you simply don't give up. You continue to fight, and you use your pain and your fear constructively to soldier through and survive.

With its dated fashion and special effects, it's easy to dismiss a '90s show like Buffy as being a product very much of its time, but that would be to totally miss the point. With its ferocious feminism, capacity to present darkness and turn it to light, and portrayal of women as inherent fighters and survivors, Buffy is utterly timeless and completely essential.

And when times do get painfully dark and feel impossibly tough, I for one still take cues from the Slayer when she said, "The hardest thing in this world is to live in it. Be brave. Live." There will never be a time when that line doesn't resonate.