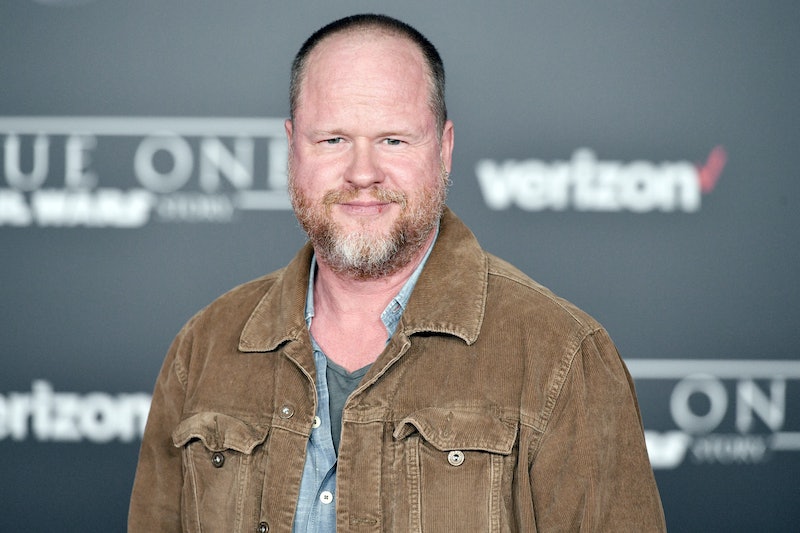 Wonder Woman is currently dominating the box office, but Diana Prince almost made her big screen debut in the late '00s. Fans of Buffy the Vampire Slayer have long mourned that Joss Whedon's 2006 Wonder Woman script never resulted in a movie. Now, thanks to sites like The Daily Dot and Comicbook.com, alleged excerpts from the Avengers director's script have landed online and they're not what fans of the writer/director would expect. In fact, people are mad about Whedon's alleged Wonder Woman script for good reason — it's an unfortunately sexist take on a feminist comic book hero. Bustle reached out to Whedon’s rep for comment, but did not receive an immediate response.

As The Daily Dot points out, the script was leaked online by Indie Ground Films. It hasn't been officially confirmed that it's the real deal, but it features the hallmark witty, pop culture-infused dialogue Whedon is known for. That coupled with the Silver Pictures watermark and the 2006 date suggest the script likely belongs to the writer.

The Twitter-verse is ablaze with fans who are appalled by what appears to be Buffy creator's sexualized introduction of Diana, the use of Steve to mansplain why Wonder Woman is simply a "tourist" in the real world waiting to return to paradise, and the objectification of the character throughout. As a longtime fan of the writer's work, it's hard to see a storyteller who identifies as a feminist fail to incorporate the hope, power, and strength of character that define the hero into his script. Instead, his rumored take on the film seems to be the polar opposite of Patty Jenkins' triumphant take on Diana's origin story.

Instead of being a story of discovery and a belief in the power of goodness, the script in question focuses on Steve teaching Diana how to be human. Throughout, the character of Diana comes across as arrogant, naive, and often unlikeable. Instead of finding camaraderie with men on Earth, as she does in Jenkins' film, Wonder Woman is dismissed, objectified, and treated with an appalling amount of disrespect by the men around her. In many ways, it's Steve who is both the heart and hero of this script, and at times, it feels more like his story than Diana's.

Despite garnering acclaim for creating feminist icons like Buffy Summers and Willow Rosenberg, this is not the first time Whedon's work has come under fire for being sexist. His Black Widow infertility plot in Avengers: Age of Ultron drew its share of criticism, and the debate about the feminist merits of Dollhouse are ongoing. Whedon can and has written layered, complex female characters, and he seems to be a strong supporter of putting women front and center onscreen. However, fans have every right to question why he would write a script that so fully ignores the best parts of who Wonder Woman is, while also emphasizing the male gaze throughout.

Whedon was recently named the writer and director for the upcoming Batgirl movie, and while this alleged Wonder Woman script doesn't inspire confidence, it also doesn't automatically mean his movie is doomed to fail. It's clear the Buffy creator is not a perfect feminist. He has made mistakes in the way he's written women before, and he likely will again. I fully understand the anger currently being directed Whedon's way, and if this script is his, it's warranted, but I also hope he can learn from his mistakes as his career moves forward.