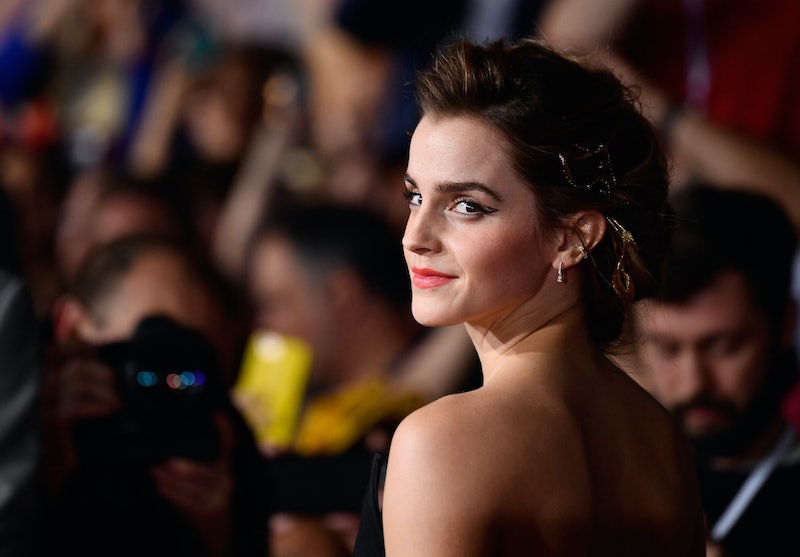 If you've debated reading Margaret Atwood's most famous novel in anticipation of the upcoming Hulu series adaptation, I have some news that might just tip the scales in reading's favor. Emma Watson has picked The Handmaid's Tale for her feminist book club, Our Shared Shelf, to read in May and June, which means you can read the book with an online network of feminists from all across the globe.

Dystopian fiction seemed to be on its way out until recently, when "alternative facts" and looming threats to women's rights sparked a rediscovery of grim classics. In February, an anonymous benefactor at a San Francisco bookstore gave away copies of The Handmaid's Tale, In the Garden of Beasts, and Nineteen Eighty-Four. That same week, The Handmaid's Tale jumped to the No. 1 spot on Amazon's bestseller list, following the Women's March on Washington and a Super Bowl ad for the Hulu adaptation.

Back in November, The Handmaid's Tale topped my list of books to read while you resist the current administration, but why is Atwood's novel so popular right now? Here's what Watson had to say about the novel's importance:

[The Handmaid's Tale] is set in a dystopian future where a society (which was once clearly the USA) is ruled by a fundamentalist religion that controls women’s bodies. Because fertility rates are low, certain women – who have proved they are fertile – are given to the Commanders of the ‘Republic of Gilead’ as ‘handmaids’ in order to bear children for them when their wives cannot. The novel purports to be the first-person account of a handmaid, [Offred], who describes her life under this totalitarian regime. Flashbacks to her past, when she took it completely for granted that she could be a working mother and have an equal relationship with her husband, show how easy it was for women’s rights to be revoked once a period of social chaos arose.

I know we're barely over the April hump, but it's time to start thinking about your summer reading list and how you'll keep your activism going through the warm, vacation months. The Handmaid's Tale is a perfect choice for that intersection. Read it alongside Emma Watson's feminist book club, and let it inspire your summer writing.