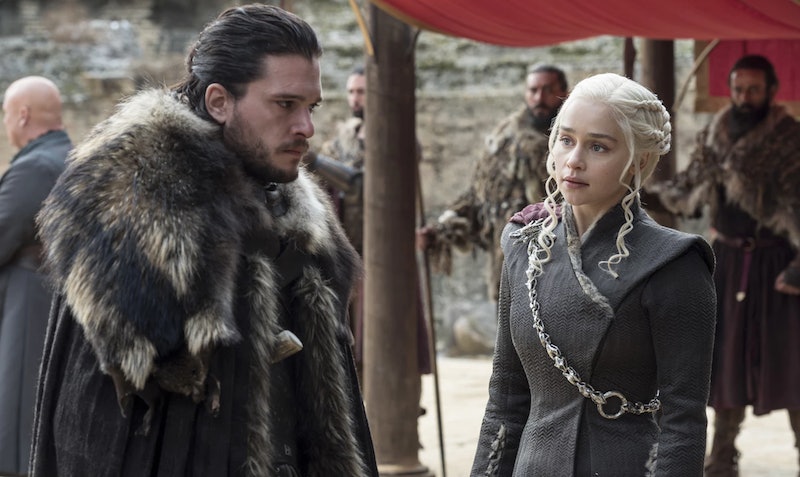 If you aren’t caught up on Game of Thrones, here's your warning: there are spoilers ahead. Just as the finale episode title hinted, the Mother of Dragons and the White Wolf had a big moment on the GoT Season 7 finale, family ties be darned. Once upon a time, the idea of Jon Snow and Daenerys Targaryen hooking up seemed like a great coupling; who wouldn't want to see the two courageous, virtuous, and super hot royals get together like they did on Sunday's episode? However, a piece of relevant information recently came to light that throws a wrench in this pairing: they are kin. And yet, we rooted for the moment. We rooted for them hard. And it was all thanks to the the lies we tell ourselves to make shipping Jon & Dany acceptable.

In case you missed it, though they do not know it, Dany is Jon’s aunt. Thanks to the sleuthing of Bran Stark, Samwell Tarly, and Gilly, we now know Jon is Aegon Targaryen, legitimate son of Rhaegar Targaryen and Lyanna Stark. Moreover, he’s the rightful heir to the Iron Throne. Rhaegar was Dany’s brother, therefore making her Jon’s aunt. Therefore making our feelings about their rendezvous, uh, complicated.

We pour ourselves a glass of ice water and stare at our reflection in the liquid. “Also, Jon and Dany don’t know that they’re related. Cersei and Jaime know full well that they are twins, but forge ahead with their taboo romance.” We take a long sip of water, letting the ice cubes clang against our teeth. “At least Jon and Dany aren’t doing this on purpose. That makes it OK, right?”

We rinse out the water glass and look at the window above the kitchen sink. We see our eyes in the reflection. “Maybe Bran, Sam, and Gilly will keep this information to themselves,” we mumble. “Maybe Dany and Jon will never find out. Maybe Bran, Sam, and Gilly will decide they don’t want to touch this situation with a 10-foot pole, so they let Dany and Jon carry on and live merrily ever after. If they never know they’re related, no harm no foul, right?”

We pace around our living room as we scroll through different GoT online encyclopedias on our phone, catching glimpses of our own face in the screen. “Hey, Dany’s parents/Jon’s paternal grandparents were siblings,” we say, “and incest is a big part of House Targaryen’s family tree which more or less makes this Dany and Jon thing par for the course. That makes all of this less weird, right?”

We lie down on our sofa and stare at the whirring ceiling fan, our eyes visible in the metal of the blades. “Don’t we want them to be happy?” we sigh. “They seem so happy together. Both of them have been through so much over the years, and it would be cruel to root against their love and happiness, right?”

We shut off the television and look at the black screen, our face looking back at us. We can't believe we may have to wait two whole years to find out what happens when this aunt and nephew duo find out they are an aunt and uncle duo. You know, assuming the Night King and the zombie ice dragon don't get to them first.