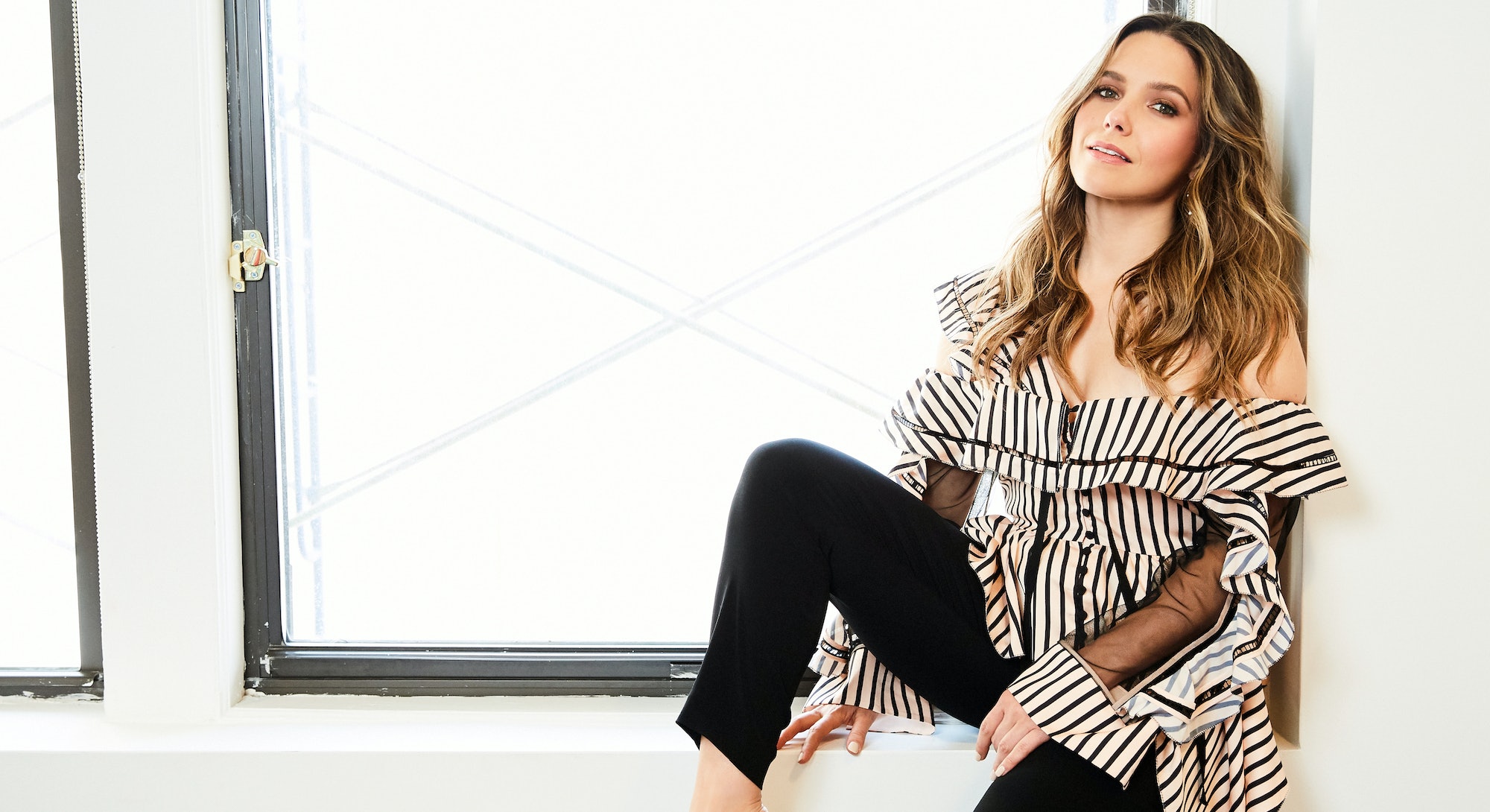 You probably feel like you know Sophia Bush. For nine years, she starred as quintessential cool girl, Brooke Davis, on One Tree Hill. She plays a superhero in the recently released Incredibles 2. And, as we all see on Instagram, she’s using social media to inspire others. But even though she may be your imaginary BFF in your head, that misconception can honestly be a little unsettling. That’s not to say she’s unappreciative, it’s just complicated.

"It is a really jarring thing when you realize that, to a person who you do not know at all, you are incredibly familiar," Bush says when we chat at Bustle's office in early June. Sometimes, she explains, strangers come up to her on the street, assuming they know her based on characters she's played and what she posts online. Says Bush, "They feel like they have a relationship with you and it is 100 percent nonreciprocal. It’s just a weird thing to be on the receiving end of."

She continues, "Sometimes people say things to you that absolutely make your day, and sometimes people make you so uncomfortable that you walk away from them and burst into tears. You never know what you’re gonna get, but generally, I just try to be as positive as possible and I’m grateful for the people that make my day."

As for why it makes her uncomfortable, people can often overstep boundaries, coming up to her on the street and touching her without permission. It can easily become too much. "I try my best to be as warm and receiving as I can," she says, "and I certainly fall short on some days, but I think people are very surprised to understand that kind of attention breeds a very deep sense of discomfort and anxiety in me."

That at-times overwhelming recognition likely comes from the fandom surrounding Bush's role as Brooke on One Tree Hill, where she transformed from the party girl into the badass designer many teens aspired to be. Yet, while Bush appreciates that fans love her, she feels a different level of attachment to the role. "People are impacted by One Tree Hill, but to us, it was just our job," she explains. "And it's cool, but it's weird when it's your own [show]."

Six years after One Tree Hill's finale, Bush has mostly come to terms with the association, but it took being compared to another TV legend for her to truly grasp how much Brooke meant to people. "It hit me more, in terms of understanding, when I had a group of girls say, ‘But don't you get it? Brooke Davis to us is what Carrie Bradshaw is to you,'" Bush recalls. "And I went, 'Ohhhh.' ... When it was equated that way to me, I went, 'OK, I’m really proud then.' Like if my character was somebody’s Carrie, then I’m down."

"It’s funny because people will say to me like, ‘I love Brooke Davis.’ I’m like, 'Yeah, Me too.' I probably love her the most," the 35-year-old continues. "There were scenes that I fought to rewrite and story arcs of hers that I fought to tell, and it was worth it in the end, 'cause it meant something to people."

Playing Brooke clearly meant something to Bush. After all, the show led to close friendships with the women of One Tree Hill, such as Hilarie Burton and Joy Lenz. The trio post birthday messages to one another and like each other's photos, but Bush says their bond is much deeper than social media. "There’s hard-won love and protection and safety in our group of women, and it’s something that we’re all really proud of and certainly always willing to go to bat for each other," she explains. "I’m like, ‘This is not a lady crew you wanna f*ck with.’ Just trust me."

And yes, before you ask: There is a group text. "Our group texts are lit. If people could see them, I’m like, oh man, this would be something," Bush says. "We literally have a group text with every girl who’s ever been on the show, and it’s off the chain all the time.”

Bush's love for her castmates is undeniably mutual. Lenz, who played Haley James Scott on the series, tells Bustle via email, "Soph is one of those friends you can always call for support, no matter what is going on in her life, she'll make time for you. It's incredibly rare in this business. She's also ridiculously smart, and a helluva lot of fun. Love that girl."

Similarly, Burton has high praise. "Sophia Bush is a hurricane of a woman. It's impossible not to get swept up in her enthusiasm, her activism, and her rabid curiosity about life. We're born only 7 days apart, and so I've been fortunate to find in her a star sister.....a sensitive, no bullsh*t, nurturer," the actor who starred as Peyton Sawyer tells Bustle in an email. "Our friendship has weathered all the highs and lows two young women can face, and as we venture further into adulthood, I'm proud of the relationship we've built. Seeing all her success makes me immeasurably happy. She's earned every accolade."

If you don't believe that the ladies of OTH truly have each other's backs, just take their many interactions on Twitter, such as a misunderstanding earlier this spring where Bush stood up for Burton, and did not hold back. Reflecting on the incident, Bush recalls now, "I was like, I’m done with this sh*t. I was like, 'FYI, I just published this really gnarly thing.' ... [Burton] was like, 'There is not a single person that defends me the way that you do, other than my husband.' And I was like, well, but I was your wife first, so this feels fair."

Aside from starring on screen together, there's another reason the women of One Tree Hill are so close — they had to band together in a way fans had no idea about until recently. Last fall, Bush was among a group of women from the OTH cast and crew who wrote an open letter detailing sexual harassment allegations against showrunner Mark Schwahn. "Many of us were, to varying degrees, manipulated psychologically and emotionally," they wrote, "More than one of us is still in treatment for post-traumatic stress." (At the time, Bustle reached out to an agent and lawyer for Schwahn for comment, but did not receive a response. After an investigation into misconduct allegations, he was later fired from E!'s The Royals, where he also served as showrunner.)

"As a group, we all really have that kind of fight for each other because we had to learn it," Bush says now. "We weren’t working on that show when women were being encouraged to collaborate. Historically, women have been taught to compete on all levels. And I’m really glad that we’re in this cultural moment where we’re talking about how to undo that."

Bush clearly isn't afraid to speak up about injustice when the time calls for it, whether it's in regards to her friends' lives or social issues. Still, that doesn't mean it's easy. “It’s incredibly draining, but I don’t know how else to do it," she says of her activist work, which includes everything from encouraging people to not use disposable coffee cups to emphasizing the importance of voting to attending the Women's March. "That’s where fulfillment comes from for me. My job is not who I am. It’s a thing that I do and it's a thing that I love... But the way I look at the world revolves around the world, not myself.”

Saving the world is a message that resonates in her newest movie. In June 15's Incredibles 2, Bush plays Voyd, a blue-haired superhero who can't help but fangirl over Elastigirl, because it's the first time she's surrounded by other superheroes. Describing Voyd as "spunky, curious, and smart," Bush knows just how relatable the role is in today's climate. "Whether you are experiencing other-ing from the powers that be, or people around you because of your gender, your race, your sexual identity, everyone can relate to feeling like they have been cast aside," she explains. "It’s a really universal theme, the desire to be accepted for who you are as you are. Voyd is very representational of that to me."

Incredibles 2 also very much doubles as a metaphor for current immigration issues in the U.S. (the central plot revolves around superheroes being deemed "illegal" and fighting to exist freely as themselves). "I kept that in mind for so many groups that are currently being persecuted in our culture," Bush says. "Whether you examine what’s happening with immigrants, whether you examine what’s happening with race relations in America, whether you look at that horrifically discriminatory ruling that came down from the Supreme Court, that a person is allowed to discriminate against people because of their sexual orientation. We are abandoning the very tenants of our democracy."

Her voice rises as she continues, "It’s grossly wrong. There’s no way to sugarcoat it... It is horrifying that we live in a time like this. I hope that a movie that is this positive and this family-oriented and this purely entertaining and enjoyable and suspenseful and happy can subconsciously worm its way into people’s open hearts and remind them that societies only get better when every single person in them is allowed to put their own personal brand of magic on the world around them and fight to make it a better place."

Her passion is tangible, and it's no wonder that Bush's social justice actions and speeches are frequently applauded by fans and publications alike. Yet when people compare her to a superhero IRL, she admits it's harder to process. "It’s really kind, but I have a tough time with it," Bush explains. "I like to be completely invisible in a crowd and I really struggle with the amount of energy that comes at me sometimes, regardless of how kind."

It's a good reminder, though, that she is only human. As Bush puts it, "I am more bolstered when someone says to me, ‘I’m such a fan of your activism.’ Then I know we’re relating on something. If people want to talk to me about a project, it’s cool, it’s fine, but again, it’s not me. It’s sort of their projection and their interpretation of a thing that I did that means something to them."

Whether she's your Carrie Bradshaw or your Brooke or your Voyd, at the end of the day, she really is just Sophia. Someone existing in this world and trying to make it better — for herself, her friends, and future generations — in the process.

Editor's Note: This story has been updated on June 20.