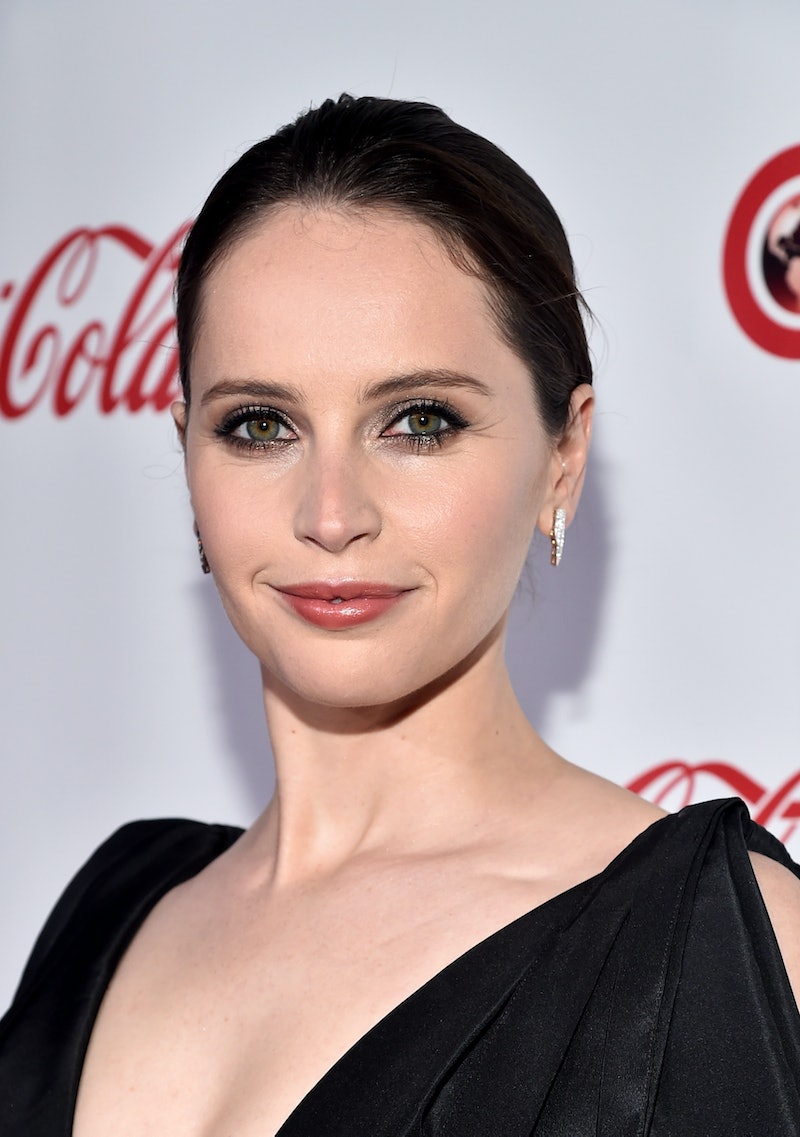 Felicity Jones' acting career has taken off in recent years, and she's hitting major milestones in her personal life as well. On Saturday, Felicity Jones married director Charles Guard, her boyfriend of three years, in a private ceremony, according to E! News. The publication also reported that the ceremony took place at Sudeley Castle in the Cotswolds, Oxfordshire, England. Bustle reached out to Jones' rep, who confirmed the wedding happened.

As for the guest list, the event was reportedly attended by several of Jones' former co-stars, including Tom Hanks and Eddie Redmayne. According to The Sun, the two high-profile actors were in attendance, showing up to support their friend. The couple reportedly closed the castle to the public, and enjoyed nice weather for their big day.

It's not a huge surprise that Jones chose to keep the wedding a secret. The actor began dating Guard in 2015, and the two have long kept their relationship private. Guard, who directed Round About Five and The Uninvited, is also from the United Kingdom. According to Us Weekly, the couple got engaged in May of 2017, but little else is known about the proposal. Jones was spotted wearing a diamond ring on the red carpet the next month, further confirming the engagement.

While not shy about showing off the ring, the star has been notoriously tight-lipped about the romance itself. She even opted to attend major events solo — in 2016, she walked the red carpet for the premiere of Star Wars: Rogue One without the director by her side, and also appeared alone for the 2017 Met Gala.

The actor previously dated artist Ed Fornieles for 10 years after meeting at the University of Oxford, but the two split in 2014, according to The Mirror. She began dating the director the next year, and while Jones may not offer many public details about the relationship she has shared her affinity for love stories. While doing press for the Theory of Everything, she said the romance drew her to the role. "I am definitely romantic and I love romantic stories, that's why I keep making romantic movies," she told The Telegraph. "It's funny how seeing a love story never gets boring because it's the dream isn't it? It's the dream to have a true connection with another human being."

It seems the actor got a love story of her very own, and many old friends showed up for the big day. As previously mentioned, Redmayne, who starred by her side as the late physicist Stephen Hawking in The Theory of Everything, was reportedly in attendance. The star's Inferno costar Hanks also showed up to offer well wishes. Unfortunately, it's not yet known if any of the actor's Star Wars costars were at the secretive event, but even so, it's clear she has the support of her peers in the industry.

In recent years, Jones has truly come into the prime of her career. She received a Best Actress nomination for her part in The Theory of Everything, and landed the leading role of Jyn Erso in a Star Wars: Rogue One. It's not clear what her next film or TV project will be, but she's committed to taking on complex, interesting characters. In a 2016 interview with Harper's Bazaar, she discussed the growing opportunity for women in Hollywood. "It's such an exciting time getting to play these incredible women who are leading the stories. They have their own ideas and they take their own decisions," she said. "I have had really strong female role models my whole life. I was instilled from a young age with a sense of independence and making my own way in the world, not relying on a man financially."

Starting a family may be in the star's future as well. In the Harper's Bazaar interview, she also discussed the impact children would have on her career. "Fortunately, I feel like we're in a new era, where it is empowering rather than limiting to have children," Jones said. "From what I can see from friends and relatives, women get stronger and more decisive from having children, they don't waste their time doing things they don't want to."

Regardless of whether or not kids come into the picture, congratulations are definitely in order for Jones, who is doing well both personally and professionally. It's not surprising that she kept her wedding mostly under wraps, but fans can take comfort in knowing that her costars were by her side on the big day.