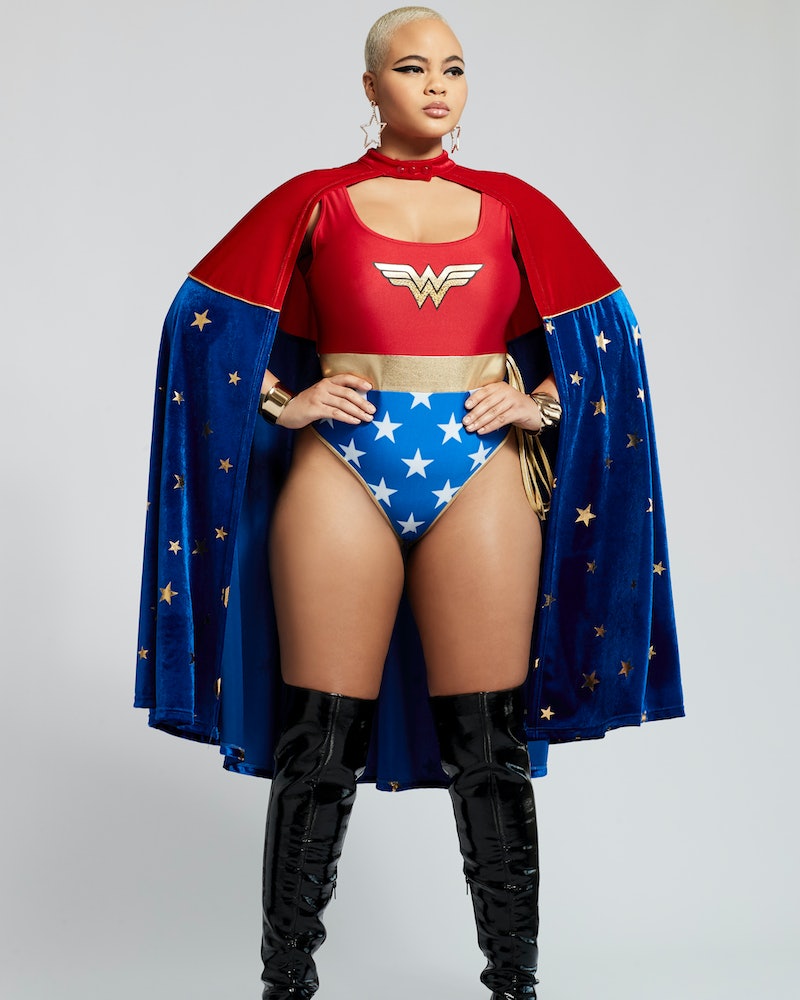 It's October, and while temperatures may not have reached full-on autumn status yet, that doesn't mean spooky season isn't here. The creepiest time of the year has arrived, and the Forever 21 x DC Comics collection is your must-have wardrobe for the occasion.

The affordable brand has teamed up with the comic book giant to launch an entire collection of superhero and super villain-inspired looks that can take you from a night out in costume on Halloween to a low-key day out celebrating the fandom. Yes, that is possible. The brand and comic publisher have created a series of pieces that can be worn as costumes for your spooky parties, including capes and bodysuits, as well as hoodies and accessories that can extended beyond Oct. 31.

In the collection, DC Comics fans can find options inspired by major faces like Batman, Wonder Woman, and Superman as well as pieces that take direct inspiration from the look of of the comic strips themselves. Whether you've been a long-time fan of these heroes and villains or are looking for a way to get into the Halloween spirit early, the collection will help you do it.

The DC-inspired clothes maintain Forever 21's affordable pricing and retail for $14.99-$49.99. As for sizing, there are plus options available. Options begin at a size small and extend to a 3XL. Every piece from the collection is available now at Forever 21's website.

The collaboration is in honor of the 80th anniversary of Batman, and the designs take inspiration from both the heroes and villains of DC's iconic comic.

In a press release, the brand says, "We are beyond excited to partner with DC Comics to celebrate 80 years of Batman...The collection is a mix of fashion-forward silhouettes paired with DC’s iconic retro comic book art. Also included within the assortment is our own version of cosplay — with a twist. We designed into some of our best selling bodysuits and sets for a fun, but, wearable take on the spooky season."

The collection of DC Comic-based designs may be in celebration of Batman and on time for Halloween, but the release also aligns with the publisher's resurgence in the film world. On Oct. 1, DC Films released its first trailer for the upcoming Birds of Prey. The movie centers on Margot Robbie's Harley Quinn, who first appeared in Suicide Squad back in 2016, as well as other notable female anti-heroines in the DC universe.

While the collection only features one design inspired by Quinn, the pieces still lend themselves to those who would be fans of the upcoming film. Plus, yes, there are Catwoman-inspired looks for those who want a bit of villainy in their lives.

The team up between Forever 21 and DC Comics may not surprise long time shoppers of the brand. The retailer has launched a cacophony of collaborations lately including work with major brands like Cheetos and designs inspired by pop culture icons such as Selena Quintanilla. Now, Forever 21 had add comic book-based looks to their line-up, and they're just waiting for you to shop them.

More like this
Mrs. Wheeler Wore A Vagina Necklace In 'Stranger Things' Season 4
By Allie Fasanella
12 Clear Resin Rings That Are So Y2K-Chic
By Vanessa Powell
You Can Buy Margot Robbie's 'Barbie' Roller Skates Now
By El Hunt
22 Cute Hiking Outfits That Will Turn You Into An Outdoor Enthusiast
By Vanessa Powell
Get Even More From Bustle — Sign Up For The Newsletter