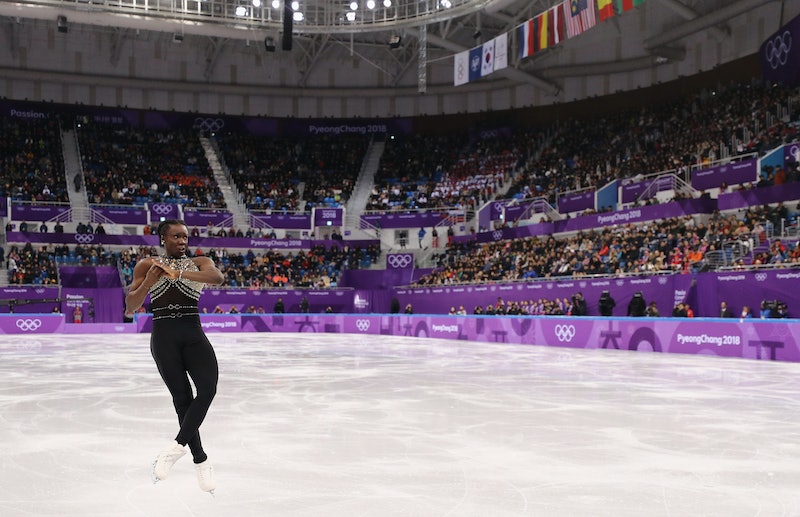 In the world of Olympic figure skating, you won't find uniforms. Instead, outfits come from everyone from moms to Vera Wang, but for female skaters, the outfits typically all stick to skirts. Well, French figure skater Mae-Berenice Meite's Olympic pants were a major break from tradition, and kind of an exciting moment in the world of figure skating fashion.

You may have heard Meite's name already. She's the fabulous Olympian who skated to a medley of Beyonce's "Halo" and "Who Run the World (Girls)" during her short program for the team competition. While France did not medal in the event, Meite certainly gained more wide-spread notoriety outside of figure skating circles for her song choice — and for her attire.

It's important to know that while costumes rules in figure skating appear to be pretty subjective, there are rules. Female skaters can wear pants. The most stringent rule calls for modesty (You know those bizarre flesh-colored panels in costumes? This rule may be why they exist). Pants, though, are totally allowed and obviously meet the requirement.

Despite them being allowed in competition, Meite's pants were a major break with tradition. In fact, she was the only female figure skater wearing pants during the 2018 Pyeongchang Winter Olympics. Basically, she seems to have come to be unique, and she certainly succeeded.

The ensemble seems to be one-piece, but it's difficult to tell. The all-black look is pretty seamless, though. With a sheer panel midriff and gorgeously intricate gold detailing along the bodice, it's every bit as blingy and beautiful as fellow Olympic skaters skirts.

Plus, let's be honest, a woman who ice skates to Beyonce deserves a one-of-a-kind look, and that's exactly what Meite's pants are.

While Meite ended up finishing in ninth place with her short program in the team competition, she was still one of the stand out stars because of her fashion and music choice. Twitter was on fire for both her routine and her unique choice to rock pants instead of a more traditional skirt.

With her unique style choice, many wished she had placed higher during the competition.

Unfortunately, she did fall during her routine.

Others, however, just didn't care given her song and fashion choices.

Some users pointed out the unlikely event that Meite would have a wardrobe malfunction. Unfortunately, South Korean Olympian Yura Min wasn't so lucky. Min suffered from what seemed to be an unhooked clasp during she and partner Alexander Gamlin's routine, but being the Olympian that she is, she handled the accident like a champion.

Some Twitter users pointed out that Meite carved out her place in the Olympics not just because she's an incredible athlete but because she's one of just 41 black Olympians.

She's inspired people, and the fact that it's Black History Month is just a nice cherry on top of the "Mae-Berenice Meite is amazing" sundae.

People are truly in love Meite.

Are you supposed to be rooting for Team USA? If you're stateside, probably. And you probably are if you saw Mirai Nagusa's historic triple axel or Adam Rippon's incredible skate. But hey, there's always a place in your heart for a Beyonce-skating, pant-wearing, total slayer French woman, too.

Meite certainly seems aware of all the love she's getting on social media, and she's showing it back to her newfound fans.

As for what you can expect next from the skater? The women's individual medal competition is scheduled to start on Feb. 21. Expect to see Meite out on the ice again — and hopefully she'll be in another jumpsuit.