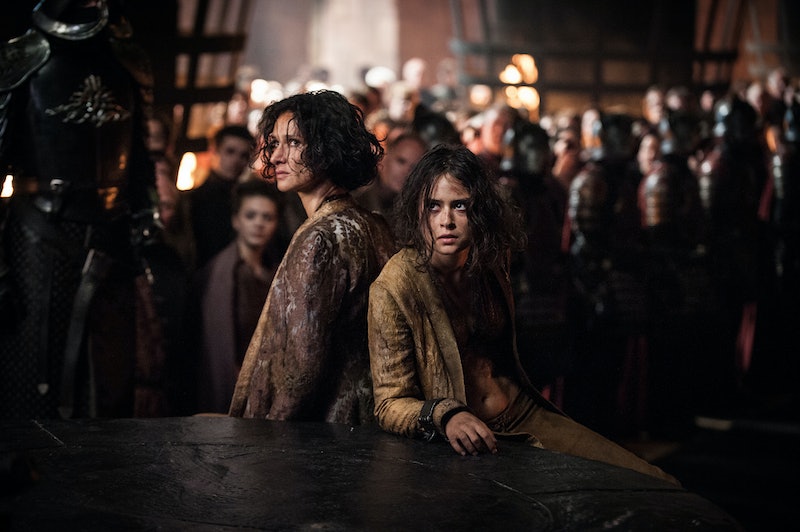 In Sunday's episode of Game of Thrones, "The Queen's Justice," fans said farewell to Ellaria Sand, even though they didn't realize it. During an interview with Newsweek, actor Indira Varma confirmed her character's fate. As far as the woman who's played the Dornish matriarch since Season 4 knows, Ellaria will live out her final days in the dungeon below the Red Keep, watching as her daughter Tyene's body decomposes. While plenty of characters have met gruesome ends on Game of Thrones, Ellaria's last scene is one of the grimmest to date.

Varma's exit means fans of the Sand Snakes and Ellaria won't be getting a satisfying end for the show's only society where women were seen as equals to men. The women of Dorne were fighters, lovers, and rulers. Even bastards were not looked down upon in the kingdom as they are in the rest of Westeros. Book fans have long complained that the show didn't do right by Dorne or the Sand Snakes, and they were correct. The characters were often far too one-dimensional, and they were never given a chance to grow. But Ellaria possessed a ferocity of spirit that almost made up for the botched Sand Snakes storyline.

Even though Ellaria's last appearance on the show is frustrating, it must be said that there is a sense of undeniable poeticism in Cersei's revenge. The Queen is forcing Ellaria to watch Tyene die of the same poison that Ellaria gave to Myrcella in Season 5. Princess Myrcella was one of Game of Thrones' true innocents, and Ellaria ruthlessly assassinates her. That doesn't take away from the horror of what Cersei is doing to Ellaria, but in this one instance, it's easy to see why Cersei believes this is a fit punishment for Ellaria's crime.

As memorable as the scene is for Cersei, it's frustrating to know Ellaria will die so helplessly. A woman who was so unafraid of staging a coup that she murdered the Dornish Prince should be allowed to die as she lived — fighting. Instead, her last scene is one of pure despair. Cersei denies Ellaria a voice, leaving her with nothing but a muffled scream as she lunges toward her daughter. Varma told Newsweek,

"When I first read the scene I was irritated that I had no dialogue. But I couldn't second guess where Cersei was taking it which was compelling. And, by the end, I thought what a genius bit of revenge and writing."

Game of Thrones is hurtling toward its end, and as a result, characters are being killed at an alarming rate. Ellaria's last scene is a reminder that not all of the show's characters will be given a proper farewell. In some cases, their exits will be jarringly abrupt. That's the hazard of having an accelerated pace.

It's too bad Ellaria won't have a chance to enact one final act of revenge. The Dornish badass deserves better than a slow death in her cell, and it's a shame Game of Thrones won't let Ellaria live to fight another day.