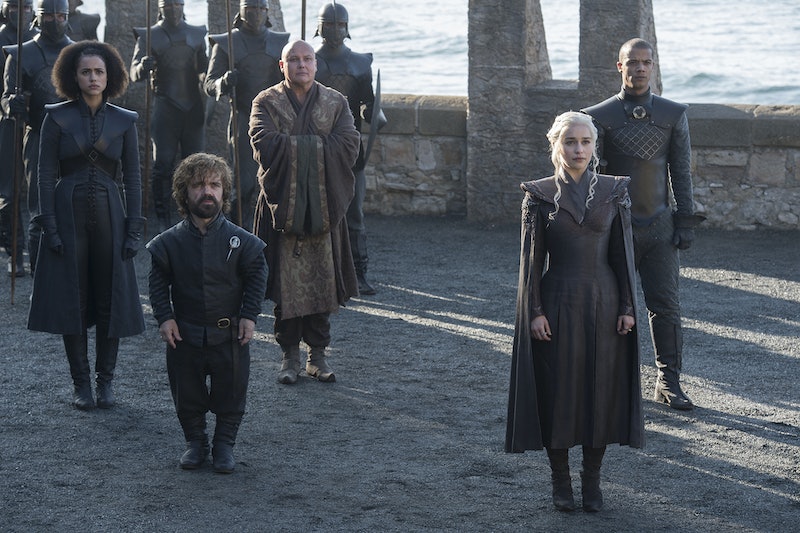 It's time for Westeros to stand united. HBO revealed 12 Game of Thrones character posters on Wednesday, the same day that the latest Season 7 trailer was released. Each poster features the profile of a different character with the icy look of a White Walker in their eye and simply reads "Winter Is Here." The message is clear: the Night's King is coming for the Seven Kingdoms, so the remaining characters need to stop fighting among themselves and realize they have a common enemy.

What's curious about the posters is the characters HBO decided to highlight. Most of them are expected, like the Starks and the Lannisters, but there are a few surprises thrown in as well. Both Tormund and Littlefinger are given their own spreads, which suggests that they will play a larger role in Season 7 than previously anticipated. Meanwhile, key characters like Sam, Jorah, Ser Davos, and Melisandre are nowhere to be found. It seems like the choices made were deliberate, and these 12 Game of Thrones characters are the ones to watch out for when Season 7 premieres on July 16.

Once you see the group in full, their various connections become clear. The characters chosen almost all represent the remaining houses, and they all possess the power to change the game — whether they realize it or not.

No one is more aware of the threat that the White Walkers pose than Jon. The King in the North is the only monarch in Westeros with any idea what winter is blowing in, and, at this point, it seems it will be up to him to either stop the Night's King or to rally the rest of the houses to join his cause before it's too late.

Jon's polar opposite is Cersei. She sees enemies everywhere, but only if they're a threat to her control over King's Landing. Now that she's lost all of her children, Cersei no longer has anything left but the Iron Throne. However, the more she focuses solely on her prize, the more likely she is to ensure her own demise.

Tyrion is in a unique position in Season 7. As the Hand of the Dragon Queen, it's his job to advise Daenerys. While this puts him in direct opposition with his family, it also gives him the chance to help Jon if the King in the North does seek help from Daenerys to stop the impending White Walker invasion. The youngest Lannister has the potential to influence some of Westeros' heaviest hitters. It's going to be interesting to see if he uses his power to bring down his sister or if he will see how worthy Jon's plight truly is.

By all rights, Sansa should be the true heir of Winterfell, and, if Littlefinger has his way, she will be by the season's end. Sansa has come a long way from the days when she dreamed of being like a lady in the songs. She deserves to be in control of her own life for once. Hopefully, she can find a way to do so without engaging in a power struggle with Jon or any other member of her family. The Starks needs to stand together now that winter is officially here.

It's hard not to feel sorry for Jaime. Heading into Season 7, he's sworn to protect his sister, and that puts him at odds with his little brother. The Lord Commander of the Queensguard seems doomed to fight a losing battle. I just hope it doesn't end up with him facing off against his former co-captive, Brienne, on the battlefield.

After six seasons of waiting, Daenerys will finally return to Westeros in Season 7. Her ascent to the Iron Throne isn't going to be an easy one though. The Lannister twins are sure to fight her every step of the way, and she may have to make her first tough choice as a queen if Jon comes calling. With her goal in sight, the Dragon Queen may not be interested in turning her attention to the North, but it's exactly what she needs to do if she wants the Seven Kingdoms to survive.

I have no doubt that Bran's greenseer gift is going to continue to play a huge role in Season 7. Not only is he the only living person who knows about Jon's Targaryen roots, but he also has a unique ability to move through time that will have to prove valuable with so many battles still to come.

Arya is a bit of a wild card. Yes, she's a Stark and she has training as a face-changing assassin, but will she end up reunited with her family? There have been precious few hints about what Arya will do now that she served up Frey pie to Walder, but that doesn't mean there aren't big things ahead for the character.

Brienne seems to be firmly on Team Stark now, and that could mean she will finally see some battlefield action. The downside? If Jon allies himself with Daenerys to bring down the Lannisters, she might end up fighting Jaime, and that would be heartbreaking.

Theon is still dealing with the trauma of what Ramsay put him through, and now his Uncle Euron is trying to kill him and his sister. Seriously, he can't catch a break. The Greyjoy siblings have allied themselves with Daenerys, but it's still unclear what that means for either of them if Euron catches up to the Dragon Queen's fleet.

Yes, he makes you laugh, but Tormund is also one of the most important people in Jon's corner. He's a warrior who has immense sway among the Free Folk, and he knows how to handle himself on the battlefield. Seeing Tormund receive a poster is unexpected, but it can only mean good things for Season 7.

Trying to figure out Littlefinger's motivations is next to impossible. He's always playing the long game, and, in Season 6, his intent appeared to be to spread discord between Jon and Sansa. By the time Season 7 arrives, he may be working an entirely new angle. The only thing you can be sure of is the only person who will benefit from his actions is Littlefinger himself.

These characters are all sure to play a major role in Game of Thrones Season 7. Keep your eyes on them and the people they surround themselves with as winter finally comes to Westeros.

More like this
Does 'Locke & Key’s Ending Mean There Could Be A Season 4?
By Sophia Moore
The Bestselling Novel 'The Doll Factory' Will Be Adapted Into Thrilling TV Series
By Catharina Cheung
The 'PLL: Original Sin' Creators Say A’s Identity Will Be “Very Clear” By The Season Finale
By Alyssa Lapid
Netflix Just Rebooted A Classic ‘90s High School Drama
By Maxine Harrison
Get Even More From Bustle — Sign Up For The Newsletter