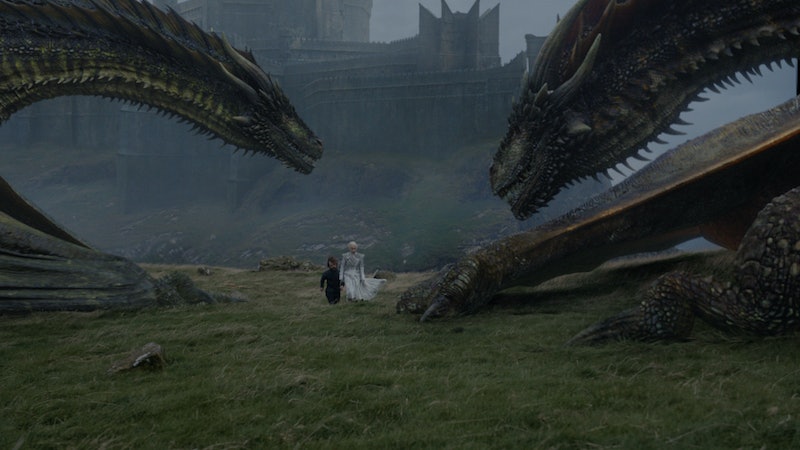 OK, so it's that time again y'all. Yes it is time for another round of Game Of Thrones Season 8 rumours. Oh yeah, because we love to bring the chaos don't we? Well the cast of the addictive but brilliant Game Of Thrones love to anyway. Yes, you guessed it, one of them has been flipping flapping their mouth again. It must be a flipping nightmare working for the PR department at HBO, honestly.

So, guess who is was this time? Well Tyrion Lannister, aka Peter Dinklage, has been teasing about the final season of Game Of Thrones, so let's get our crazy wild fan hat on and over analyse every single letter of every single word. Let's see if there seems to be a hidden message, a clue, a grain from which we can build a theory about the Season 8 ending.

Well, that might be a bit tricky. Basically Dinklage, who plays Tyrion Lannister, has said that the final season is going to be dead good. What? That is all you are giving us?! Recently Dinklage appeared at the premiere of his upcoming film I Think We're Alone Now which co stars Elle Fanning. When asked by a journalist while walking the red carpet if the new season will bring as much drama as previous seasons, the Evening Standard reports that he responded:

Say what?! OK, so basically he has confirmed what we all suspect, that the final season will bring the noise, bring the chaos, bring the white walkers, bring the zombie dragon. Basically. Bring. It.

What sort of drams could our boy Tyrion be bringing? Well like, apart from making all us blondes look dead bad, his sister is also the actual evil queen herself, Cersei. Yes, Cersei sucks, but let's be real, she is also a bit of a feminist icon. Well, I suppose apart from all that horrific murder stuff and all the trying to kill other women for power etc. Where's the sisterhood Cers?! Anyhow, it looks like she is now preggo, potentially with her other brother's baby... I know right, flipping EW guys. Well, it's not like they are ever afraid of a bit of incest over there in GOT HQ are they? One second why do we watch this again?

Anyhow, Dinklage's character has gone full turncoat and is hanging out with an entirely different blonde family, the Targeryans. Real talk. Yep, good old mother of dragons herself, Daenerys Targeryan. Just last week, Dinklage gave us some insight into what he was thinking when Dany and Jon Snow got down and dirty in Season 7. Talking to EW, he explained:

"A lot of the time with Tyrion, it’s professional and personal. Obviously, he has feelings for Daenerys. He loves her — or thinks he does. She’s awe-inspiring. He’s questioning that because he doesn’t have a good track record for falling in love. There’s jealousy wrapped up in there. And he loves Jon Snow, too. They’re the two people he has the most in common with, in a way — they’re both outsiders in their own families who have refused to follow the path their family has taken, and hopefully for the better. He’s wondering how smart of a move [Jon and Dany getting romantically involved is], because passion and politics don’t mix well. He knows the two of them getting together could be very dangerous."

Yikes. If I know Tyrion, he won't let any risk pass without sticking his oar in to try and steer it in the way he thinks is best. Could that be the meaning of the "and then some" in his quote above? Will things get even darker than they have in the past? Time will soon tell.