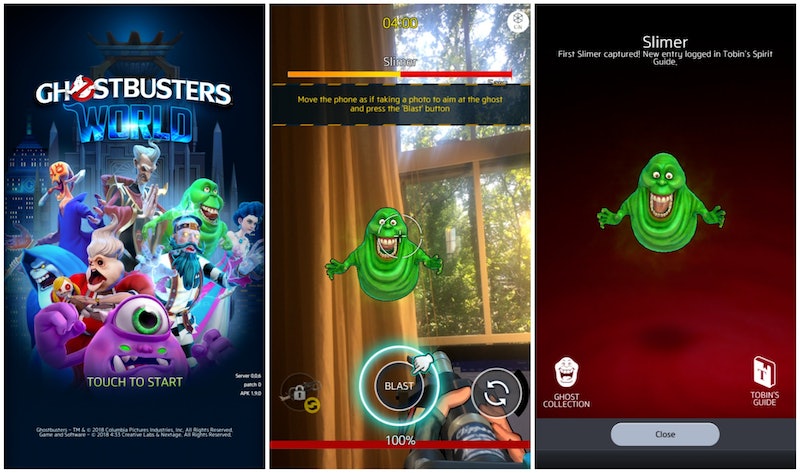 If you’ve lately found yourself missing the magic of the summer of “Pokemon Go,” good news: There’s a new augmented reality app in town that will push all your nostalgia buttons and get you out exploring your world again in ways you might not usually experience it. The “Ghostbusters World” AR game is essentially “Pokemon Go” with ghosts — although it turns out that there’s more to the mobile app than that, too. And, I mean, let’s be honest: Who hasn’t dreamed of taking down the Stay Puft Marshmallow Man with a proton pack of their very own?

“Ghostbusters World” was announced in February of 2018 as a collaboration between Sony Pictures Entertainment Consumer Products, Ghost Corps — the production company formed in 2015 specifically to oversee the Ghostbusters franchise — and mobile game developer 4:33. Early builds of the app subsequently became available to some gaming journalists over summer — and now that it’s October (ghost hunting season!), the full game is finally available to the general public. You can play it on both iOS and Android devices, which should make aspiring Ghostbusters of all varieties happy.

But if you were hoping to see Abby Yates, Erin Gilbert, Jillian Holtzmann, and Patty Tolan as played by Melissa McCarthy, Kristen Wiig, Kate McKinnon, and Leslie Jones in the 2016 Ghostbusters reboot, you might be disappointed. The focus of “Ghostbusters World” is primarily on the original team of Peter Venkman (Bill Murray), Ray Stantz (Dan Akroyd), Egon Spengler (Harold Ramis), and Winston Zeddemore (Ernie Hudson). Don’t get me wrong — I do love me some classic Ghostbusters; as a child of the ‘80s, that’s the team I grew up with — but I do kind of wish an effort had been made to include the new team as well.

Then again, I’ve also only played about 30 to 45 minutes’ of the game, so hey, maybe they’re there and I just haven’t found them yet. Or maybe not. I'll have to wait and see.

Anyway, the big question is, of course, how much like “Pokemon Go” is “Ghostbusters World?” They’re definitely in the same genre — and since “Pokemon Go” is the app that pretty much pioneered that genre, it’s unsurprising that the basic concept is the same: You find creatures in your own environment, then hit them with things in order to capture them.

CNET’s Bryan VanGelder went so far as to call “Ghostbusters World” “blatantly a ‘Pokemon Go’ clone” — but although he also noted that that was “neither a good thing nor a bad thing,” I’m not sure I totally agree. Granted, I haven’t played “Pokemon Go” for quite some time, so I’m not up to date on the latest development in the app; however, even though the conceit is the same, there’s a lot that’s different between the two right out of the gate.

There are fewer customization option available for your avatar, for example, which might seem like a negligible detail, but which matters a great deal for representation (and yes, we’re back to choosing a gender for our avatars instead of a “style”). There’s a little more to basic the gameplay, too — you have to start by blasting a ghost down until it’s weak enough for you to trap; then you have to actually toss out one of the traps and drag the ghost down into it. You also have to defend yourself from attacks through reaction commands. And lastly, there’s a story mode in addition to the geographically-based standard mode.

The differences, though, aren’t necessarily “bad” or “good,” just as the similarities aren’t necessarily “bad” or “good.” It all depends on what you’re hoping to get out of the experience: If you liked “Pokemon Go,” but wished there was a bit more to it, then “Ghostbusters World” might appeal to you; however, if you appreciated “Pokemon Go’s” simplicity and generally like your mobile game to be a bit more casual, then “Ghostbusters World” might be a bit overwhelming to you.

Here's what you can expect from the game based on my own (somewhat limited) experience with it.

When you boot the app up, it greets you with the Ghostbusters theme song; it also pretty much continuously plays this song as you play, so if you need a break from it, you might want to mute your phone. As you might expect, you start by personalizing your character….

…Before Venkman runs you through a tutorial of how to play. Your first target is that ever-popular fan favorite, Slimer:

Instead of throwing Pokeballs at the ghosts, you tap the “Blast” button repeatedly in order to weaken the ghosts with your particle thrower (what I will always think of as a proton pack). Once you’ve sufficiently drained their health, you can throw a trap out — and from there, all you have to do is hold the capture button and move your phone to pull the ghost down into the trap.

Note, though, that unlike in “Pokemon Go,” the ghosts can also hurt you while you’re trying to weaken and trap them. When a ghost is winding up to attack, a “Counter” button will appear on the screen. If you hit it in time, you’ll be able to counter the attack; if you don’t, though, you’ll take damage.

After you bag your first three ghosts, Janine will help you “take care of the paperwork” — which is really just you finally naming your character. Then Egon will walk you through the items you’ll use as you continue to play. Note that although “Ghostbusters World” does have the equivalent of Pokestops — they’re called “Dimension Doors” — you also have to build your traps and your equipment. Traps are built via a basic crafting mechanic using coins, which you get as rewards for trapping ghosts, completing daily “missions” — small tasks and challenges like capturing three ghosts and destabilizing three ghosts — and as you progress through story mode. You can upgrade your equipment through “research,” too.

Story mode plays a bit more like a traditional video game; rather than just randomly finding and fighting ghosts in your environment, you work your way through a sort of map, battling with specific ghosts as you go. I haven’t played beyond the prologue sequence yet, but the battles I have fought included the Librarian and Zuul from the first Ghostbusters movie. Just, y’know, FYI.

You might want to watch out for a few issues with the app, though: First, it’s a little buggy; it crashed twice while I was playing it. And second, it drains your battery. After only about half an hour of gameplay, my battery indicator had already ticked down to 35 percent. Granted, I have an old phone — it’s an iPhone 6 — which has already been having some battery life issues with the latest iOS update… but still. This game will eat up all the juice you have. Consider yourselves warned.

“Ghostbusters World” is available for both iOS and Android; it’s free (plus in-app purchases, of course — doesn’t everything have those these days?) in the iTunes App Store and the Google Play Store. Happy ghostbusting!