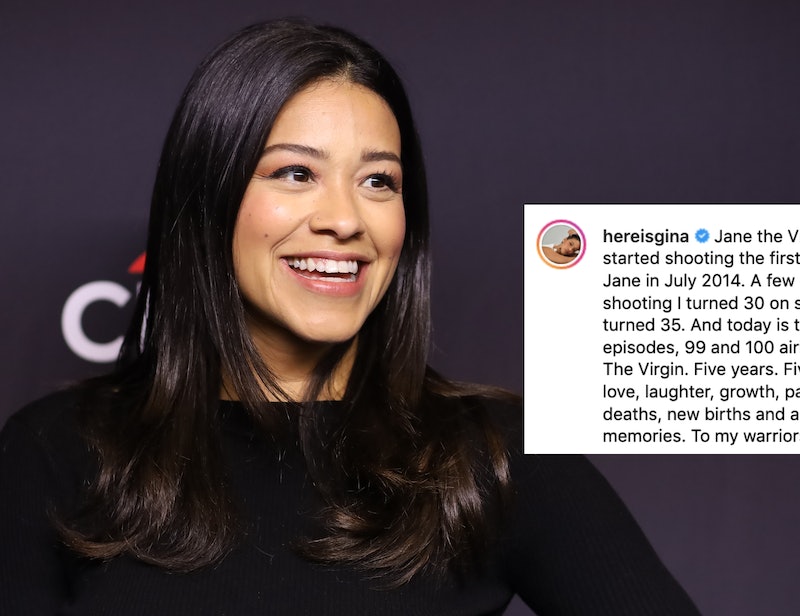 Spoilers for Season 5 of Jane the Virgin ahead. After five seasons of twists, turns, and telenovela-inspired secret twins, Jane Gloriana Villanueva's story is finally coming to an end, and the cast of Jane the Virgin is celebrating the show on social media. If fans are already having a hard time seeing the show come to an end on July 31, Gina Rodriguez's goodbye post to Jane the Virgin on Instagram won't make things any less emotional.

The actor teased Jane and Rafael (Justin Baldoni)'s big day in her post, sharing a snap of herself sitting on the ground, wearing a wedding dress and a black Jane the Virgin hoodie. "We started shooting the first season of Jane in July 2014. A few days into shooting I turned 30 on set," Rodriguez wrote alongside the photo, reflecting on how much things have changed in the past five years. "Yesterday I turned 35. And today the very last episodes, 99 and 100 [are] airing of Jane The Virgin. Five years. Five years of love, laughter, growth, pain, surprises, deaths, new births and a sh*t ton of memories."

She continued by thanking her fans for supporting her career in its many forms, writing, "To my warriors who have supported me from day one, Thank you. I am able to live out my dream career because of you and I will never stop making art to bring Joy and Laughter into your home/train ride/plane ride or classroom!"

Finally, Rodriguez wrapped up her post by thanking the show's creator, Jennie Snyder Urman, and the rest of the cast and crew of Jane the Virgin. "Thank you to Jennie for making me your Jane and to the incredible cast for becoming my family. I will always love you Jane."

Rodriguez's on-screen fiancé, Justin Baldoni, also shared his own tribute to Jane the Virgin on Instagram ahead of the finale. "Can’t believe this is it. Tonight it ends. What a ride," the actor and director wrote alongside a photo of himself, Rodriguez, Yael Grobglas, and Jaime Camil between takes of what appears to be Jane and Rafael's wedding. "So much gratitude. What a journey this has been. What a family we have become. What a blessing."

The cast have often reflected on what Jane the Virgin and all of the opportunities that it has provided them over the years. In a March interview with Vanity Fair, Rodriguez even declared that the show is "the love of my life," and gushed about how both the show and the people she's worked with over the past five years have changed her. "It’s just such a hard thing to, to express what Jane has done, not only for me and my career and making my dreams come true, which could be enough because it’s absolutely everything."

In that Vanity Fair interview, Rodriguez also promised fans that Season 5 will wrap up in a way that will satisfy fans and honor Jane's story at the same time. "Honestly, I feel like we’ve been so privileged to have such outstanding writers for all five seasons," the actor gushed. "They just always cared and the quality always stayed really fierce and strong, and I think because of that I’m really excited about this season. I’m really excited that we’re closing up a show with such tenacity and nobody let up."

While there are still likely plenty of telenovela twists and turns still to come in the Jane the Virgin finale, it seems as if Jane — and her story — will continue to live on, thanks to Rodriguez and the show's dedicated fans.