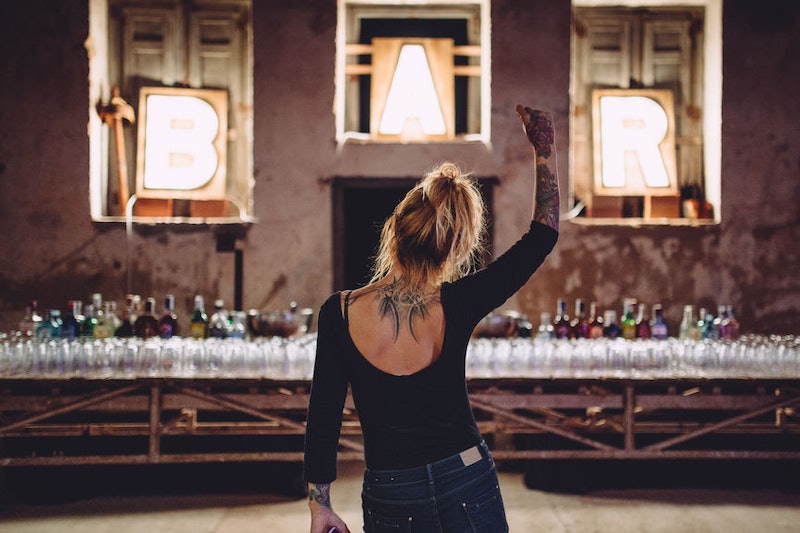 I don't go on that many nights out anymore. This is partly because the older I get the more appealing watching telly in premium loungewear with a sofa-full of snacks for company becomes, and partly because going on a night out as a woman can be a disheartening reminder of the contempt with which 50 percent of the population is still treated. Yes bear with me, I know that got serious pretty sharpish.

I don't know about you but when I go on a night out, it's usually to have a fun time getting a little jazzed with my mates, a bit of embarrassing myself on the dance floor, a bit of doing things that will make me want to hide under the covers and never come out when I hear about them the next day, and a little bit of ending up in the nearest 24-hour McDonald's at 4 a.m.

What I don't go on nights out for is to be harassed or belittled. But unfortunately that's what often happens when I do decide to go out out. One recent night out was a nasty reminder of this.

A few weeks ago I headed up north to celebrate a friend's birthday, and to be honest, the idea that I was going to end up feeling uncomfortable because of my gender wasn't really playing on my mind before I left the house. I got ready, I put on a new top, but as a group of us made our way around the bars of this particular town, I realised I wasn't going to be able to enjoy the evening the way I wanted to. And the reason for that was my gender.

I don't know what it was about this particular night, perhaps I was just most sober than usual, but gendered injustices kept presenting themselves to me and I couldn't ignore them. The first one happened when I left a bar only to have a man standing in the queue shout at me, "Well I guess the stripper show is over then." Now, I respect strippers' right to do whatever they consider to be empowering and so I don't actually find being called one insulting. This guy, however, said it with the intent of insulting me. Part of me feels that I should tell you what I was wearing in an attempt to prove to you how out of line the insult was. But I won't because that would send out the message that had I been dressed a certain way I would have deserved to be insulted. What encounters like this teach me, is not only how rife misogyny still is, but how much women, myself included, internalise these lessons about the right way to be, act, dress, and live.

Dear drunken men in queues up and down the country: keep your views on women's outfits to yourself unless you're directly asked for them. And don't try and humiliate them by heckling what you believe to be insults at them while they get on with their lives.

And it just got worse from there. After a few more bars, where I struggled to enjoy myself after Queue Man took a sledgehammer to my sense of fun, we ended up in a nightclub that specialises in the sort of cheesy pop that was guaranteed to turn my mood around. I was so ready for a bit of Spice Girls attitude to bring me back from the brink. Except it didn't happen. After about 10 minutes in the club a guy started grabbing girls in the group from behind. I turned around to see him laughing as though disrespecting our bodily autonomy was one big joke to him. Feeling pretty fed up, I decided to dob him in to the bouncer, a skill I've honed over years of being accosted by creepy men in nightclubs with sticky floors. I don't know if they actually did anything about it, but it felt good all the same.

And still the evening's sexism was far from up. After a couple more songs, I started to notice that the DJ was talking over the music. At first I thought he was just being cringe but then I started to listen and realised he was actually changing the lyrics of my beloved '90s and '00s pop anthems and adding sexually explicit and misogynistic words and phrases of his own.

At this point I'd had more than enough. After all, there's nothing quite as sobering as being reminded of how much contempt for women there still is out there. I wanted to go on a nice night out with my friends. I expected to have a bit of hangover, I didn't expect to be presented with so many exquisite case studies of the ways in which women are dismissed and disrespected. But what's upsetting is the fact that I had to leave. These men — with the exception of the guy who I'm pretty sure the bouncers kicked out — got to carry on with their evening free from rebuke. I was the one who went home with a bad taste in my mouth that had nothing to do with alcohol.