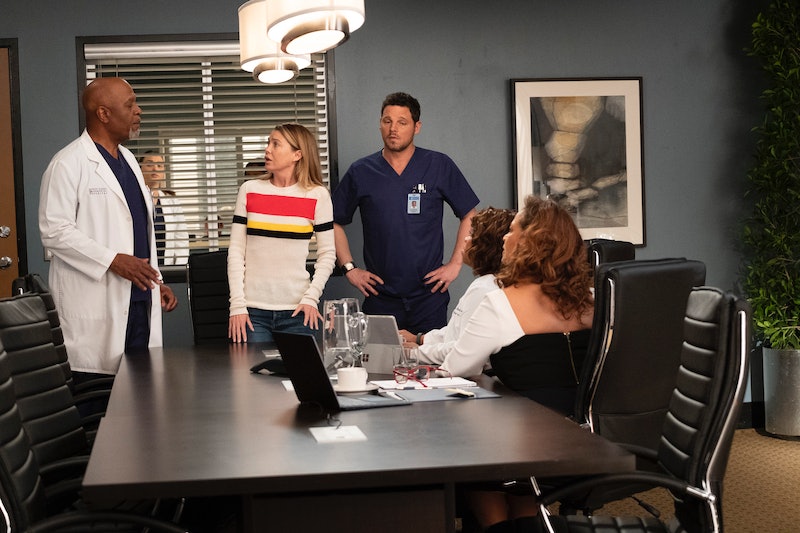 It feels like it's been forever since new episodes of Grey's Anatomy were on, but now that summer is coming to an end, that's all about to change. On Thursday, September 26, the doctors of Grey Sloan Memorial Hospital will return for the Season 16 premiere. But since the season finale last spring, about four months have passed, so it's totally understandable if you're a bit fuzzy on the details. There was a lot going on, which is why this refresher on everything that happened on Grey's Anatomy Season 15 recap will come in handy as you dive into the premiere on Sept. 26.

Between Meredith committing actual insurance fraud, Teddy and Owen becoming parents for the first time, and Jo's struggle with meeting her birth mother and finding out her roots aren't exactly what she expected them to be, Season 15 was a total whirlwind — especially when you add all the usual relationship and medical drama in. There's never a dull moment at this hospital anyway, which means that some of the finer points can always be forgotten, leaving fans scratching their heads when the premiere rolls back and around. Want to avoid the confusion? Let's begin.

Meredith had a big season... with an even bigger ending. The first half of the season was all about her relationship with DeLuca. They finally decided to be a couple for real, and they hit a lot of relationship milestones, like DeLuca meeting her kids for the first time, which went really well. In the midst of all of this, Meredith found out that her dad, Thatcher, was dying, and she chose to be by his side while he took his final breaths.

At the end of Season 15, though, things started getting a little more complicated. When she treated a patient who didn't have insurance because she and her father were seeking asylum in the United States, Meredith opted to file the patient's care under her daughter Ellis' name, Ellis, so the patient could use Meredith's insurance. Meredith has broken a lot of rules and and cut a lot of corners over the years but this one is a biggie.

Miranda and Catherine found out about the insurance fraud, prompting DeLuca to take the fall for her, which meant he got arrested.

Meredith wouldn't let that happen, though — she went to the police station to turn herself in so DeLuca could be freed, but we don't know what happens next yet.

Jo had a particularly rough season. At the beginning, she and Alex were planning to start a family and Alex served as interim chief while Miranda took a much needed break. His mom came to visit him, and she seemed to be doing a lot better — she and Jo loved each other. But then, when Jo found her birth mother and decided to confront her, she learned things about her past that she didn't expect. Not only was her mother not into having a relationship with her, but she also revealed that Jo was the product of rape, and that her birth father was dead.

Jo refused to speak with anyone about what had happened when she got back to Seattle, and ended up in a pretty dark place. Finally, Meredith was able to get through with her and Jo decided to check herself into psychiatric treatment to get help for her depression.

Jackson's world was turned on its head when he found out that his mom, Catherine Avery, had been diagnosed with cancer. This sent Richard spiraling, and he ended up destroying a bar that takes chips from people in Alcoholics Anonymous that break their sobriety. Ultimately, 90 percent of Catherine's tumor was able to be removed.

Jackson and Maggie's relationship struggled, though. Jackson was exploring the concept of religion after his mother's illness, disappearing for weeks at a time, and he and Maggie fought about the way they live their lives differently. The season finale left them stranded when a heavy fog hit Seattle, and Jackson left Maggie in the car to get help. Where. Is. Jackson.

After Teddy showed up and announced that she was pregnant with Owen's child, his relationship with Amelia immediately went downhill. They struggled with how to split their time with baby Leo, and even though Betty's parents took him back, they couldn't handle a young baby like him and ended up giving him back to Owen.

After moving to Seattle permanently (and telling Owen about her pregnancy), Teddy quickly got into a serious relationship with Koracick. But unfortunately, it didn't seem meant to be, as Teddy started to realize that she wanted to be with Owen instead. He was by her side when she gave birth to their daughter, who she named Allison, and they ended up confessing that they're both still in love with each other.

After deciding a clean break from Owen was necessary, Amelia began to move on. She and Link traveled to New York to speak at a conference, where Amelia ran into her sister. This landed her an unwanted invitation to a family dinner, and since they still thought she was married to Owen, Amelia brought Link along to play the part. Thanks to Link's help, Amelia was able to finally stand up for herself to her family.

Back in Seattle, Amelia and Link slowly fell for each other and started dating, although she did struggle to commit to a relationship because of her relationships in the past.

So what happens next? It isn't long until we finally find out for sure. Thursdays are about to get a lot better, and all our questions will be answered very soon.