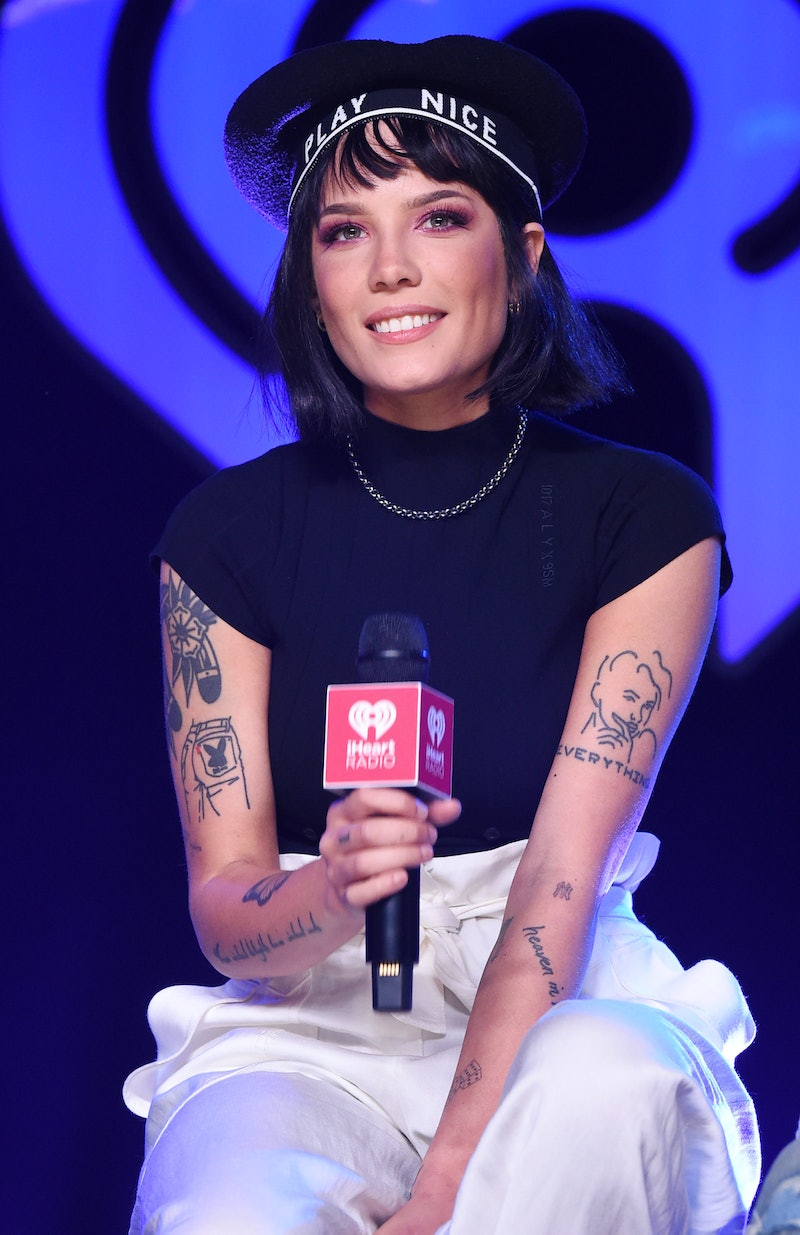 Most '90s kids lived for weekends parked in front of their TV sets — bowl of cereal in hand — for classic Disney One Saturday Morning cartoons like Doug, Pepper Ann, and Recess. As it turns out, Halsey was one of them. About two decades later, a Recess live-action movie is in the works and Halsey wants it to happen just as much as you do. Sure, the film hasn't been confirmed and it would be an unofficial remake, yet but fans can still dream, right?

Responding to a 102.7 KIIS-FM tweet about the Recess news, Halsey wrote, "my ashley spinelli moment has FINALLY arrived." Of course she was referencing the pigtailed, orange-ski-cap-and-black-boot-wearing character from the iconic animated series, which originally ran from 1997-2001. (Disney also later released several movies, including 2001's Recess: School's Out.) Rounding out the Third Street Elementary School crew with Spinelli were: TJ, Gretchen, Vince, Mikey, Gus, and Randall.

As fans know, tough Spinelli went by her last name because she didn't want to be associated with the school's "scandalous," stuck-up Ashleys. Coincidentally, Halsey's real name is also Ashley. (She ultimately adopted her professional moniker based on a subway stop in Brooklyn.) — but she clarified in a follow-up tweet she wasn't throwing her hat in the ring for the role.

Instead, Halsey replied to a fan that she's simply "excited for more spinelli content." Added the "Without You" singer, "I think I accidentally based my whole identity on her." In fact, Halsey has described herself as a misfit during her school days, when she'd hide out from bullies in the art room, according to Rolling Stone. Although Spinelli likely would never shy away from facing down a bully, Halsey has since shown plenty of her own strength.

The live-action Recess movie is being crowdfunded by independent filmmakers Jerome Yoo and Kent Donguines, who noted on their fundraising page that the non-profit fan project is not endorsed, sanctioned, or supported by Disney in any way, and would be available to stream online for free. As for the storyline of the movie — which will reportedly answer the question, "What happened to the Recess gang when they went to high school?” — they described their 11-page script in the following way:

"When Mikey gets his fragile heart broken by Ashley A, the gang (with TJ at the helm) try and cheer him up with treats at Kelso's corner store. On their quest to make Mikey smile again, they discover that something more sinister than a break-up is brewing at Third Street High... There's trouble lurking in the shadows and it ain't Finster, folks."

As of publication, 39 backers had donated $2,821 of the filmmakers' $6,830 "flexible goal," with three days left in the online campaign. Among the perks of financially supporting the movie (depending on the amount): a social media shoutout, a thank you video from the cast, your name in the credits, a Skype call with the team, a cast-signed TJ hat, and even an associate producer credit.

In the "re-imagining of the gang in a high school setting tackling current issues like love, peer pressure, social media, identity, etc." actor Louriza Tronco, who currently appears in Netflix's series, The Order, will play Spinelli, according to the Indiegogo site.

There will also be a few more familiar faces among the cast, including Deadly Class lead Benjamin Wadsworth as TJ. The actor's Deadly Class castmate Sean Depner will play Mikey, with Riverdale star Emilija Baranac also portraying one of the Ashleys.

With '90s kids clamoring to see the Recess live-action movie get made, Halsey is just as here for it as they are.