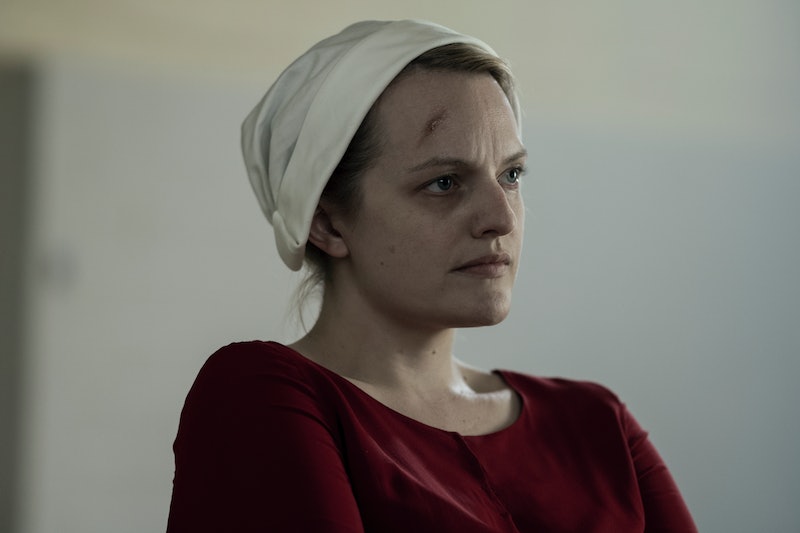 George Kraychyk/Hulu
By Alexis Rhiannon
May 2, 2018

There's a lot to fear in the Republic of Gilead, but running out of episodes doesn't need to be one of them anytime soon. The Handmaid's Tale has been renewed for Season 3, just weeks after the Season 2 premiere. It's a quick turnaround, certainly but hardly a surprise for fans of the Emmy-winning series. After all, it has a star-studded cast, anchored by Elisabeth Moss as Offred, it's raked in awards and nominations since it first premiered on Hulu, and it feels more topical than ever in the current political economy.

According to The Hollywood Reporter, the announcement was made Wednesday, May 2 at an upfront presentation that Hulu makes every year to its ad buyers. Like many other streaming platforms, Hulu plays its viewership pretty close to the chest, declining to release any statistics about who or how many people are watching their shows. But according to Deadline, they did reveal at the upfronts that their total viewership has now passed 20 million subscribers, so it's not surprising to see the platform double down on one of the shows that helped them get there.

At the presentation, Hulu also shared that the Season 2 premiere doubled the audience of its already very well-received first season. And since it was Season 1 that netted the streaming platform their first Emmy for Best Drama, as well as seven more Emmys, two Golden Globes, and a Peabody, among many others, both the show and the platform are sitting pretty right now. No matter the size of the audiences they're working with, those audiences are clearly engaged, as evidenced by the fact that they're tuning in to the currently airing season to see where it takes the story next.

And it's little surprise that they're so invested, because the plotlines for the dystopian drama could go absolutely anywhere next. The original source material consists of just one book — a 1985 novel of the same name, written by Margaret Atwood. While the author builds out a world, much of the material in her text was covered in the first season, leaving a great deal of room for showrunner Bruce Miller to improvise. A freedom which, according to the producer, he is more than ready to take on.

In an interview with THR in January, Miller said that when he was first plotting out the series, he envisioned The Handmaid's Tale running "about 10 seasons." So if he continues at this rate, this is just the first of many renewals fans can expect from this series.

But no matter how far he gets down the road, Miller stated that he never wants to stray too far from its author's vision. As he told the outlet:

"We're always trying to make sure the 'Atwoodness' of the show stays front and center. Even though we're going beyond the story that's covered in the book, in some ways, we're still very much in the world of Margaret Atwood's The Handmaid's Tale."

So even as the series moves past the novel, it will never move beyond it, which should be a sigh of relief for any purists out there.

Although no details about the number of episodes or the time frame for release have been announced yet, clues can be drawn by examining past seasons. If Season 3 follows the format of Seasons 1 and 2, averaging out the pair, then this recently announced offering will consist of between 10 and 13 episodes and be released at the end of April 2019. (Season 1 had 10 episodes and came out on April 26, 2017, and Season 2 will ultimately consist of 13, and premiered on April 25, 2018.)

It might sound like a ways away, and it is, but with episodes currently airing, and more promised after that, it should go by in no time.

More like this
Here’s How You Can Watch Season 3 Of 'Never Have I Ever' In The UK
By Frances Stewart
Does 'Locke & Key’s Ending Mean There Could Be A Season 4?
By Sophia Moore
Watch The Trailer For Netflix’s Edgy New Comedy 'FAKES'
By Brad Witter
'Yellowjackets' Just Announced Who’s Playing Adult Van & It’s Perfect
By Gretchen Smail
Get Even More From Bustle — Sign Up For The Newsletter