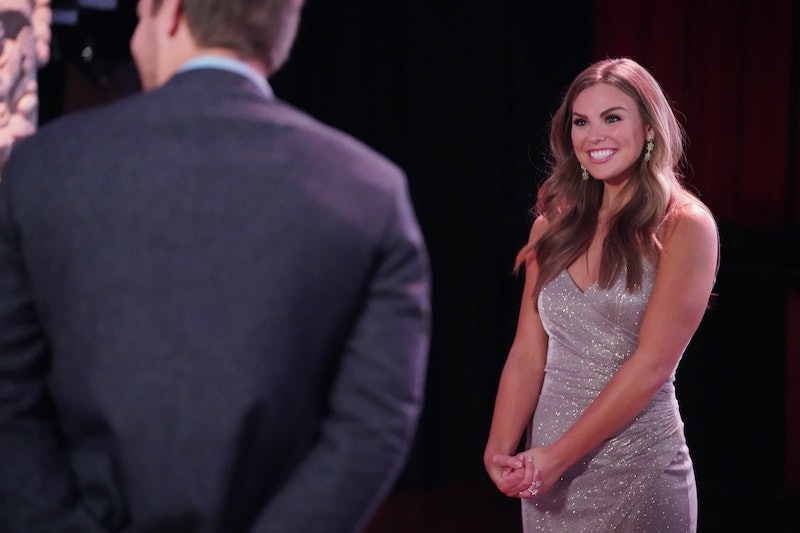 The Bachelor franchise has inspired plenty of spinoffs, several long-lasting love stories and now, a country ballad. During a Twitter Live on Thursday, Jan. 9, country star Jake Owen performed a song inspired by Hannah Brown called "Alabama Hannah", revealing that he came up with the idea for the song while watching the premiere of Peter Weber's Bachelor with his girlfriend. "All you heard about on the new Bachelor was 'Alabama Hannah,'" Owen said, referencing the former Bachelorette's appearances on the premiere episode. "It was just 'Alabama Hannah. Alabama Hannah.' Everywhere! She just won't go away."

The country singer then explained how the pair's emotional conversation about their lingering feelings for one another inspired him to write a song from Peter's perspective. "If you've given somebody multiple opportunities to take you as a lover, and not only did they [turn you down], but then they just go on with their life [and] ask other people out," Owen said of the inspiration behind the track. "This has nothing to do with the actual Bachelorette. This is just everyday life."

He then began performing the new track, which began with the lyrics, "Alabama Hannah, what do you want? If it's love that you need, well then honey, it's gone / You had your chances, so won't you leave me alone / Alabama Hannah, won't you go on back home."

Though Owen noted that the song was inspired by the relatable idea of not being able to escape you ex rather than the Bachelor episode itself, the singer did manage to pack plenty of references to Hannah, Peter and the franchise itself for Bachelor Nation to enjoy. "I've been out here in California / I've been soaking up the sun / There's lots of pretty ladies / I can't pick just one," Owen sang, referencing Peter meeting the 30 women vying for his heart on the first episode. "I'm flying high, got peace of mind / Already raised the bar / Now you're showing up here tonight / Who do you think you are?"

Of course, Owen didn't just reference Peter on his latest song — the lyrics also contained quite a few nods to "Alabama Hannah" herself and her winning run on Dancing With the Stars. "You're a beauty queen and a dancing star, and I think you'll be just fine," Owen sang at one point. "Alabama Hannah, girl, won't you get out of my life? / Girl, get on with your life."

Despite the fact that the lyrics seem to sympathize with Peter and his confusion over whether or not to give his romance with Hannah another chance, Owen made it clear that he had no hard feelings towards the former Bachelorette. "I met her on the last season of The Bachelorette. I played 'Made for You' for them," Owen said, referencing his performance during one of Hannah's dates with runner up Tyler Cameron. "She's a cool girl. This is not even a dig at the actual 'Alabama Hannah.'"

Luckily, it seems like Hannah had a good sense of humor about the whole thing. After Chris Harrison tweeted about Owen's song, joking that the singer was "speaking his truth to Hannah B on behalf of Peter," Hannah fired back in a tweet of her own. She wrote that it "better just be his truth Christopher. I’m not just chop liver now—you still have to love me and try to understand my mess."

Hannah and Peter's love story may not have been the fairy tale romance that the pilot was hoping for, but at least the former couple can take comfort in the fact that their complicated relationship will be immortalized in song.

More like this
Hannah Ann Got Engaged 3 Years After 'The Bachelor' & The Proposal Was Dreamy
By Grace Wehniainen
Bachelor Zach’s “Dream Job” Has Nothing To Do With His Work In The Tech Industry
By Brad Witter
10 Photos Of The Wildest Limo Arrivals From 'The Bachelor' Premiere
By Brad Witter
Zach Reveals The Chaotic 30 Minutes That Were Cut From ‘The Bachelor’ Premiere
By Grace Wehniainen
Get Even More From Bustle — Sign Up For The Newsletter
From hair trends to relationship advice, our daily newsletter has everything you need to sound like a person who’s on TikTok, even if you aren’t.