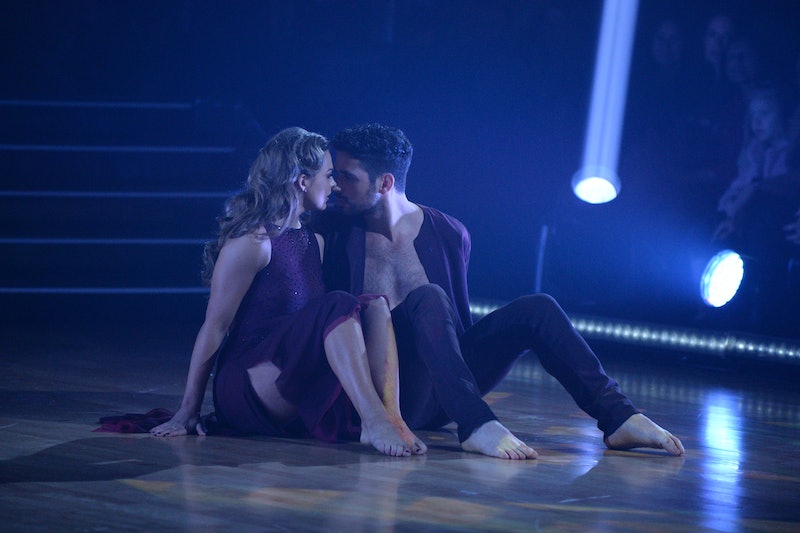 After experiencing heartbreak on national television, Bachelorette Hannah Brown is thanking Dancing With the Stars for helping her find herself once again. After performing an emotional contemporary routine to Selena Gomez' "Lose You to Love Me," Hannah Brown explained how The Bachelorette inspired her DWTS performance on Monday, Nov. 18, and how she's learning to find herself after heartbreak. The former beauty queen explained that Gomez's comeback single touched her, because, as she said, "I have been through a lot that directly relates to this song."

"My Bachelorette experience did not go like I thought it would," Brown said in the pre-performance clip, referencing her decision to end her engagement to Jed Wyatt after discovering that he had lied to her about being in a relationship during his time on the show. "I thought he was honest and he wasn't," she told partner Alan Bersten. "I didn't know what was next, really. Like, what just happened to my life."

"I never thought this would be where I was at. I truly did want to find somebody, and I didn't," Brown said on DWTS. Still, the former Bachelorette has been able to see the upside to her very public breakup. "I think the disappointment and the heartbreak is what has made me strong. I do want to love somebody one day, but right now, I am totally fine being on my own," she said.

After she and Bersten received their scores — an impressive 27 out of 30 from the judges — Brown told Entertainment Tonight that by being so open about her heartbreak on the competition show, she has been able to finally heal and move forward with her life. "I feel like when you kind of put yourself out the way I did, it's really vulnerable," she said, adding that her public breakup "gets brought up all the time, and [I] want to move forward and get past it."

"I feel like that dance was a way for me, in my heart and for myself, to be like, 'This is gone, and now it's me,'" Brown said. Though she admitted that she will probably always be asked about her time on the reality show and her relationships with her various suitors, performing on DWTS has been her way of letting Bachelor Nation know that she's in a "good" place. "I am OK, because all that needed to be put behind me so I could become an empowered woman and continue my story," she explained.

In a September diary entry for Bustle, Brown revealed that she went "straight" from being on The Bachelorette to competing on DWTS, and the lack of time to process her breakup with Wyatt often made things difficult for her in the early days of rehearsals. "I just got off a whirlwind roller coaster, traumatic experience," she wrote at the time, later adding, "It’s not just my relationships," that were stressing her out. "It's like my life is not what I thought I would be and I’m adjusting. ... I don’t know what life is gonna be like after this. What it is now, I’m not even sure."

However, it seems that Brown has finally arrived in a place where she feels stronger, more confident and more focused on herself and her future. "This experience has not been easy, but it’s been rewarding on more levels than I could have ever have imagined," Brown wrote on Instagram after her "Lose You to Love Me" performance. "I’m beyond grateful because it’s been a process to grow, feel, and learn more about myself in a unique way." Brown may have lost out on finding love during her time on The Bachelorette, but it's clear that like Gomez, she has found herself in the wake of heartbreak, and is happier than ever.