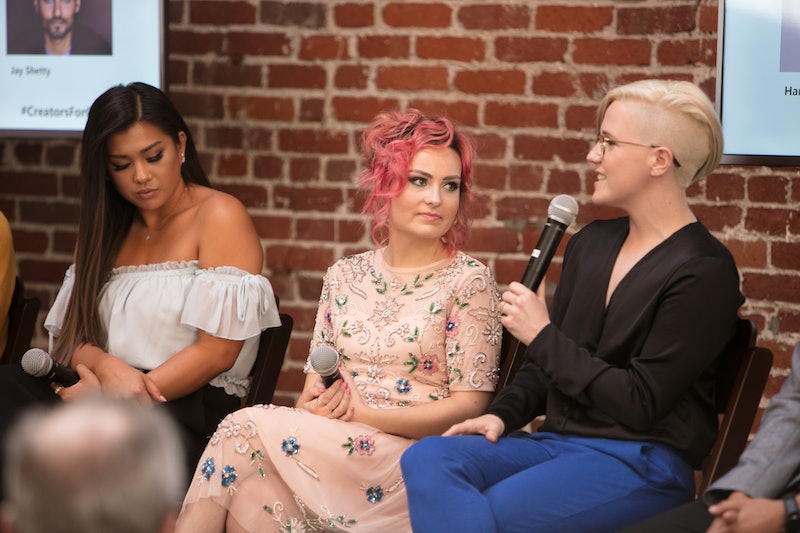 Mental health is just health. It’s something that deserves as much attention as physical health — not just in how we treat it, but also in how we speak up about it, and bust the stigmas that may be associated with it. But in reality, talking about mental health isn’t always easy. Maybe it’s your own mental health that you’re struggling with (and if so, we’ve got some guidance for talking to your friends, family, and partner about it!). Or maybe it’s a friend or loved one who has been acting differently lately, and you can tell that something is affecting them. Perhaps you want to talk to them about it in order to help or show that you care, but you want to do so in a way that doesn’t upset them or make things awkward.

Well, it’s time to reframe the way we think about that “awkwardness.” The Ad Council, in partnership with Bustle, Next 10 Ventures, and Tubefilter, recently put on a mental health summit in Los Angeles that addressed the best ways to talk about mental health topics with your friends and followers, as well as how to take care of your own mental health when you’re a creator yourself. At the summit, Bustle talked to four digital content creators — many of whom you probably subscribe to on YouTube — about their best advice for starting up that hard convo with someone who seems to be struggling. Here's what they said.

Let Them Know You Are Listening

For example, Hart was speaking at a couple of events the day of this interview, and during the transition time between events, she felt that she needed to go on a walk. “I was like, I need to go on a walk, I need to go outside, [so] I’m going to take a walk around the block and I’ll breathe some fresh air, and I’ll be good. And that, to me, is a way of decreasing stigma, [being able to say] I need to reset, let me get in touch with myself, and come back.”

As for talking to a loved one about your concern for them, Hart emphasizes that there’s no “one” best way to do it. “It really depends person to person,” she says. “So the best place to start is to say, ‘I’m listening.’ … Ask, ‘How can I help? What makes you feel heard? How do I listen best to you?’” Hart notes that some people like a lot of feedback and questions, while others just want silence and someone to acknowledge what they’re saying. But since “it differs from person to person,” Hart says, “you need to allow the person you want to be close with to let you in to that closeness, by asking, ‘What lets you feel heard?’”

Remi Cruz, who is on YouTube as MissRemiAshten, has talked about mental health from both sides of the coin. She is open about her choosing to participate in The Ad Council’s Seize The Awkward campaign, which aims to help empower people with the tools to talk to their loved ones who may be at risk for suicide, because of her own experience with a friend who was struggling with their mental health. And more recently, Cruz says that she has had her own struggles with body dysmorphia, which she realized after undergoing a significant weight loss. Now, she seeks to use her video platform to be real with her followers about her own experiences, and the things she didn’t realize would come with losing weight. “These are things I’m still learning and struggling with, [so] I kind of try to show not just the … fun things,” she tells Bustle. “Everything is not perfect, obviously, so I try to voice that as much as I can so there’s not this facade that everything’s perfect all the time.”

When Cruz realized she needed help, she reached out to her family, who were “so supportive and great,” she says. She also reached out to friends. “Some friends were incredible and have helped me even if they hadn’t gone through similar things,” she says, “or maybe they had and we were able to connect with that.” But then there were the friends who clearly didn’t want to understand what Remi was sharing with them. “I can say those people aren’t in my life anymore,” she says. “It was hard, dealing with that and dealing with my own personal issues.” Through the experience, Cruz “leaned more on my family and people who could help me through — and I know those are my very true friends.”

Realize That Sometimes It’s Better Not To Have The Answer

Molly Burke is all about stigma-busting via myth-busting. Burke, who lost her vision after a diagnosis of retinitis pigmentosa and is open about her own experiences with anxiety and post-traumatic stress disorder, is constantly using her platform (including her YouTube channel) to try “to break stigma, whether it’s being a disabled person, a woman, a millennial, [or] living with mental illness,” she tells Bustle. “I think just being my authentic, honest, open self about my mental health ups and downs is the best way I can break myths. So that’s what I do — trying to continue to have the conversation whenever it’s authentic to have it with my audience.”

As for her advice for starting up that convo with someone who seems like they’re struggling, “it’s OK to just say, ‘That sucks.’ It’s OK to not have the answer,” she tells Bustle. “In fact, it’s better, because there’s nothing more invalidating than someone saying, ‘That sucks, but at least you’re not dying of cancer!’ It’s like, yeah, no I’m not, but I still want to die, so that’s not helpful right now.” Instead, she says, consider trying a different approach. You could say something like, “I’m just going to sit here with you. That sucks, and I’m just going to be here for you. So if you need me, just know I’m here,” Burke advises. “That’s the best thing you can do for somebody, is just say, ‘Yeah, I’m here for you, and it’s OK for it not to be OK,” she says.

Ask Them To Inform You

Kati Morton is a licensed therapist, the author of the forthcoming book Are U OK? A Guide to Caring for Your Mental Health, and has a YouTube channel where she talks about all things mental health. She reiterates Burke’s message that you don’t need to have all the answers. “In fact, I think it’s best if you don’t,” she tells Bustle. “What I always try to do — [and this is] pulling from me as a therapist — is instead of pretending that I know how you feel and I know what you’re saying, I’m going to let you teach me.” So for example, if you and a friend are talking and they share with you that they’re having a hard time, a helpful response might be to say, “OK, I’m here, tell me about it.”

“Just being there [is important],” Morton says. “If we try to offer tools to try to make it better, like, ‘Oh you’re feeling depressed, OK, you hop in the shower, I’ll come on over,’ maybe they’re thinking, ‘I’m tired already, I’ve been tired for weeks.’” Sometimes it’s best if you don’t feel pressured to have that perfect answer or solution — in fact, Morton says, it’s “healthier and happier for both people involved if you let them show you what they need."