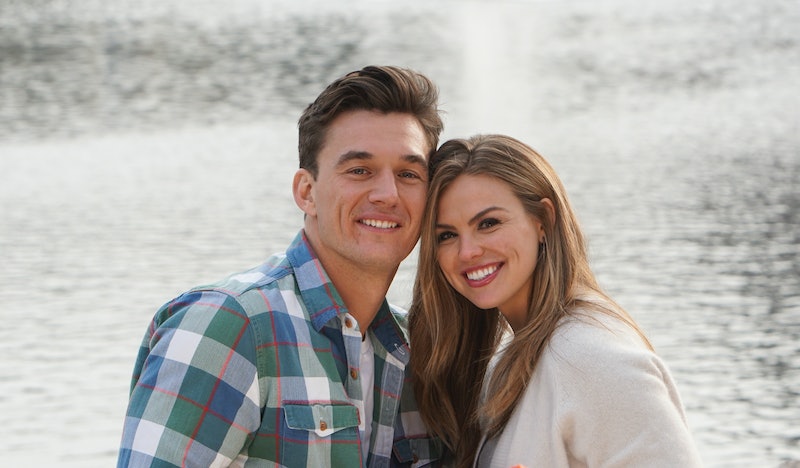 At this point in the current season of The Bachelorette, Tyler C. is the only contestant who hasn't found himself in any drama (on- or off-screen). With that said, it was very surprising when Hannah was hesitant about taking him to the fantasy suite. Her reluctance might come back to her night-one assumptions, though. Recently, Hannah admitted she had the wrong impression of Tyler C. at first.

In an interview with Entertainment Tonight from the day the Men Tell All All episode was filmed, Hannah revealed she got Tyler all wrong initially. She shared, "I think for a long time with Tyler, I had thought it was just physical." What about his uplifting pep talk during their first solo date? Or that emotional hometown date with his family? How about her post-fantasy suite tears of joy because he was so respectful and kind?

Even with all of those solid memories, Hannah went on to explain,

"I put him in a box and was scared of him and thought it was just going to be physical with him, and then really as we started having more one-on-ones together and time, I started realizing it more scared me a lot because I thought he was a f*ckboy. I did."

Meanwhile, compared to his fellow contestants, Tyler is completely scandal-free.

During the daytime portion of their date on Monday night's episode, Hannah decided she just wanted to talk in the fantasy suite with Tyler, instead of getting physical. She felt like their attraction was very strong, but she wanted to get beyond the physical interactions and connect on a deeper emotional level.

As filming went on, Hannah questioned her own evaluation of Tyler as a "f*ckboy." She explained to ET that she thought to herself, "And then it's like, 'Oh wait, maybe he's not. Maybe he's not!' And then after our fantasy suite, I was like, 'I cannot let this guy go.'" Seriously though, let's hope she doesn't. Hannah C. has a nice ring to it, right? She continued, "And it just killed me that I felt that. I put up walls for so long." Oh, the walls. Another Bachelor franchise trope along with "here for the right reasons."

The Alabama native admitted, "In that moment, I thought that it was just one thing, when there was a lot more layers to it," she said. "I think I was just... how dare I put a guy in a box that he should not be [in]." Ultimately, Hannah concluded, "He's a great guy." Yes. He. Is.

That ET interview wasn't the first time that Hannah discussed her misconceptions of Tyler C. During a May interview for The Ben & Ashley I Almost Famous Podcast, Hannah admitted she judged Tyler based on his appearance. Ashley Iaconetti told Hannah, "[After] everyone looked at those [cast] pictures initially, everyone was talking about Tyler C. He looks like an 'f-boy.'"

After agreeing, Hannah divulged, "I will say he didn't talk to me the first night and I was like 'OK. He's good-looking.' And then when he didn't talk to me the first night, I was like, 'You're on my freaking radar.'" In Hannah's defense, she didn't get to talk to eight of the guys. Finding out that Scott had a girlfriend took up a lot of her time. Aside from that, Hannah focused on having quality conversations with the men, instead of just moving quickly through each meeting. Hannah emphasized, "I'm very invested when I have a conversation with someone."

And we are all invested in Hannah's conversations with Tyler C. He's caring, good-looking, and respectful. On top of that, he stands up for Hannah. This is a good example of how first impressions can be so wrong. Well, that and Hannah giving Luke P. the first impression rose, but fans will forgive her for that one.