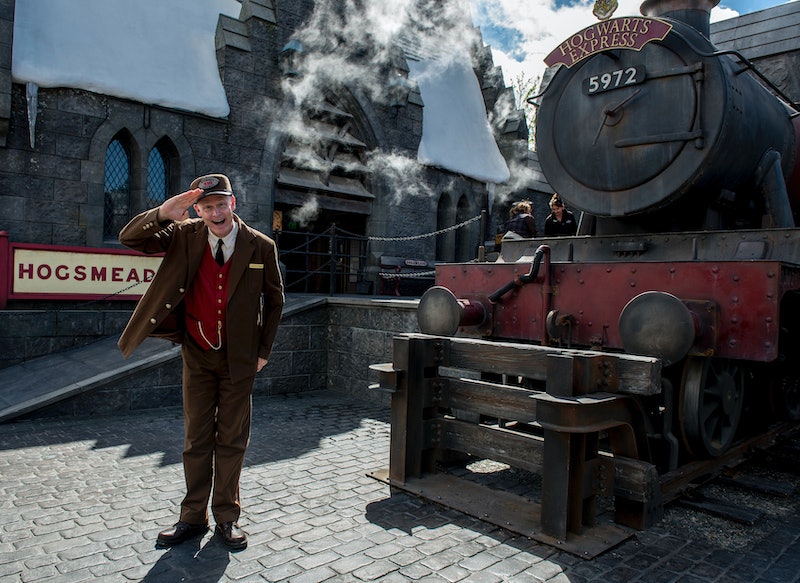 The Hogwarts Express is headed to New York City. The Wizarding World announced on Friday, Jan. 10, that the first Harry Potter store will open in Manhattan in summer 2020. Following in the spell cast by the Wizarding World Universal theme parks located in Orlando, Los Angeles, and Japan, the Harry Potter store in New York will contain three stories of Harry Potter and Fantastic Beasts merchandise. So for fans who can't make it to the "real" Diagon Alley (aka, the set on the Warner Bros. Studio Tour in London), this store will make all your J.K. Rowling-inspired wizarding dreams come true.

When Harry first encounters Diagon Alley in Harry Potter and the Sorcerer's Stone, he has a unique shopping experience gathering all of his Hogwarts essentials at the individual purveyors, like Madam Malkin's Robes for All Occasions and Ollivanders wand shop. But the Harry Potter flagship store will be more like a magical mall with the Wizarding World claiming it "will house the largest collection of Harry Potter and Fantastic Beasts products in the world under one roof," per a press release.

It's unclear if that means there will be specific shops within the store located at 935 Broadway. But the press release did note that Bertie Bott's Every-Flavour Beans, personalized robes, and wands (some exclusively designed for the New York store) will be available to purchase with knuts, sickles, and galleons ... or just standard Muggle currency.

Photo opportunities will abound, and the Harry Potter store will also contain yet-to-be-announced interactive experiences. While the details remain as mysterious as who put Harry's name in the goblet of fire, here are the top things that the Harry Potter NYC shop should have to ensure the most magical time.

Butterbeer is a tasty drink consumed at locations like The Three Broomsticks and Hog's Head in Hogsmeade and The Leaky Cauldron in Diagon Alley. Universal has nailed the recipe (their version is non-alcoholic) and butterbeer has become a staple of the theme parks, with the Orlando locations at Islands of Adventure and Universal Studios selling more than $20 million of the butterscotch-flavored drink. To elevate the retail experience to Harry Potter on his broomstick heights, butterbeer better be served.

The notorious Knockturn Alley of Diagon Alley may be where Death Eaters shop, but the Dark Arts-focused Borgin and Burkes provides a sinisterly delightful shopping spell for all — even if you don't spot Draco Malfoy using the Vanishing Cabinet.

The Magical Menagerie at Universal Florida sells plush toys of Hedwig, Crookshanks, Fang, Buckbeak, Scabbers, and Pigwidgeon for people whose favorite Hogwarts course is Care of Magical Creatures. The Harry Potter shop in New York should also make Hagrid and Newt Scamander proud by also selling these fantastic beasts. You might be able to also spot owls at an Owl Post location that allows mail to be sent from the shop.

Make sure you get candy to take home with you — like Chocolate Frogs, Exploding Bonbons, and (of course) Bertie Bott's Every-Flavour Beans. But beyond Honeydukes, the Harry Potter store may also want to provide sweets in the form of Florean Fortescue's Ice-Cream Parlour. The ice cream shop sells uniquely British flavors like Earl Grey and Lavender. If the magical mall goes the food court route, a dining experience at the Leaky Cauldron may also be in the tea leaves.

Whether it be from Ollivanders or Wands by Gregorovitch, visitors to the New York City store deserve to have a wand select them. With the New York store promising "a brand-new range of house wands," a wand shop is a done deal — and let's be real, it'll most likely be in the form of Ollivanders so every fan can live their best Harry Potter life.

So hop on your Nimbus 2000 or Firebolt and fly to NYC. Or, if you don't already have a broom for all your Quidditch-playing needs, buy one at the Harry Potter flagship store in summer 2020.